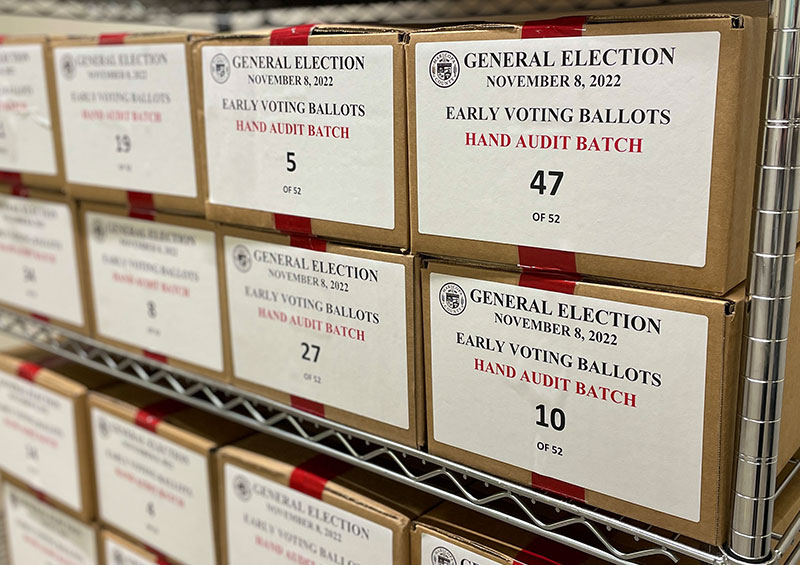 An attempt to explain the current status of Arizona’s election from a Prescott perspective.

Here’s what we know right now. Expect this to change.

So, it’s typically this author’s practice not to write about something that is unknown.

If a certain topic is wanted, and more information is required, then research is needed.

So, that’s what has been happening. Because these midterm elections are a little crazy, don’t you think? So, lots of research.

You can see the entire State election results here: https://results.arizona.vote/#/featured/33/0

There are no votes for Prescott City Council, that election will take place next year. The State Representatives for District 1 represent voters in both Coconino and Yavapai County.

Although not all the ballots are counted yet, both Quang Nguyen and Selina Bliss are the most likely winners of the LD-1 AZ House race. 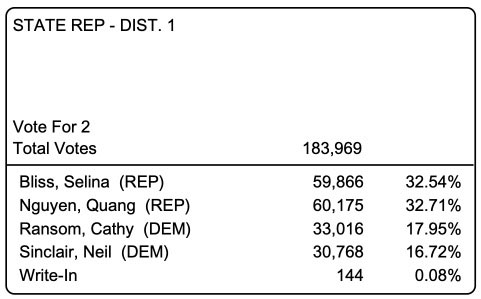 Ken Bennett is likely to win the LD1-Senator seat. 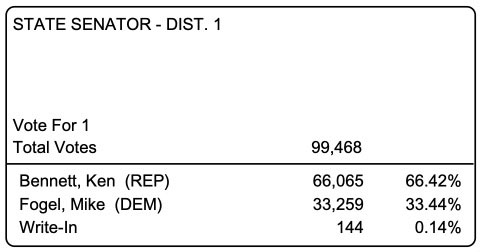 Bennett is filling the seat that Senate President Karen Fann vacated. Fann chose not to run for re-election this year.

With the redistricting that took place and was finalized at the end of December, 2021, Representative Paul Gosar had to choose which district he would represent, since the new redistricting maps contained portions of his current district in two new separate districts. Gosar has chosen to represent District 9, which left a Republican opportunity in CD2. (By the way, Dr. Gosar ran unopposed and won his district election.)

Democrat Tom O’Halleran was the representative in the previous District 2. Prescott is now in District 2 due to the new maps. The new District 2 is huge, the largest in the state. Eli Crane ran as a Republican against O’Halleran (D). Crane is currently leading O’Halleran by 18,845 votes statewide. Singling out Yavapai County, Crane's lead is more significant.

You can see here how large District 2 (the blue area) is here: 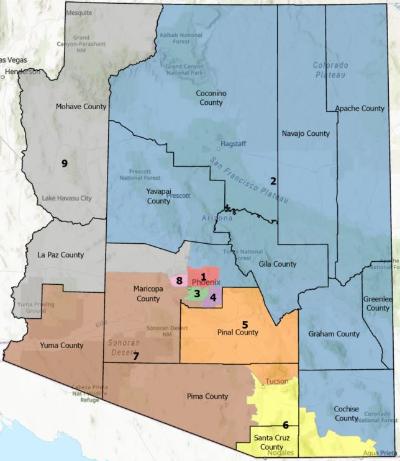 Here are the results from just the Yavapai County portion of the race: 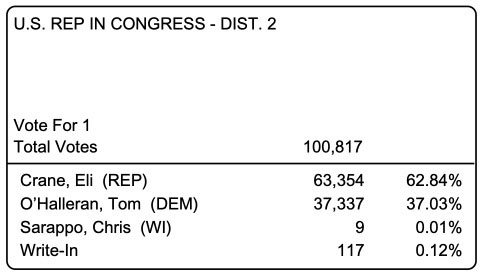 The Prescott Unified School District Board had one 2-year vacancy, and two four-year vacancies. 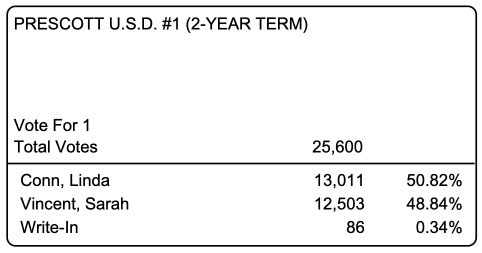 Linda Conn is leading, but it’s very close. There are enough outstanding ballots that this could change, although typically that would not happen. Even still, it’s a bit too soon to call. 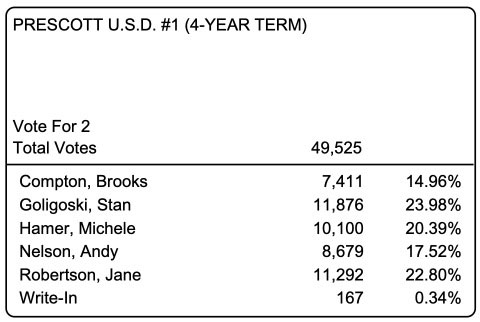 Stan Goligoski and Jane Robertson are ahead here, and it’s likely to hold. Michele Hamer, however, is only 1200 votes behind Jane, so, again, it’s a bit too close to call.

Mitch Padilla is your new Justice of the Peace! He’ll do a great job.

Ron Williams is returning as Constable for Prescott.

In Maricopa County, elections were marred by machine malfunctions at about 60 Vote Centers through most of the day. Some voters were turned away and sent to other Vote Centers. At least 17,000 ballots were affected.

Here, the Chairman of the Maricopa Board of Supervisors, Bill Gates (not the billionaire) is with Recorder Stephen Richer to explain.

Here is a message from Chairman Bill Gates and Recorder Stephen Richer with an update for @maricopacounty voters on Elections Day. pic.twitter.com/OkQczCklGb

Statewide, there are still hundreds of thousands of outstanding ballots. We don’t know how many, because there is not a mechanism for reporting that. Dr. Kelli Ward, the Chairwoman for the Arizona Republican Party made this tweet on Twitter:

Why don’t we know EXACTLY how many ballots were cast in Arizona yet? That number is finite and should only DECREASE as provisionals and non-cured ballots are removed. Why don’t we know?

It’s a reasonable question. What we can do is look at past elections to get a rough estimate of what to expect.

We created a model on which we can make predictions. Over the last couple of days, we've been testing it, and it's held up pretty well. Please understand, this is only an estimate.

In the chart below, we compare the current status of vote counting to the 2018 election.

Why the 2018 and not the 2020? Because the 2020 election was a Presidential election, and more voters tend to come out to vote for President. So, by going back to 2018, we can look at similar activity during a midterm election. Below, I am providing 2 versions of the same chart. One is annotated, and one is plain, to make it easier to read. 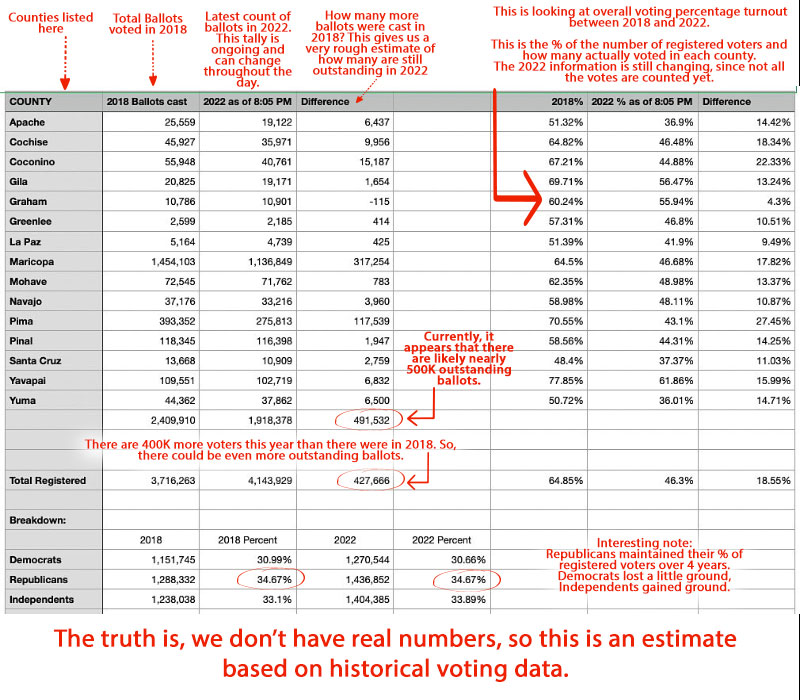 This one might be easier for you to read, although it’s the same thing. 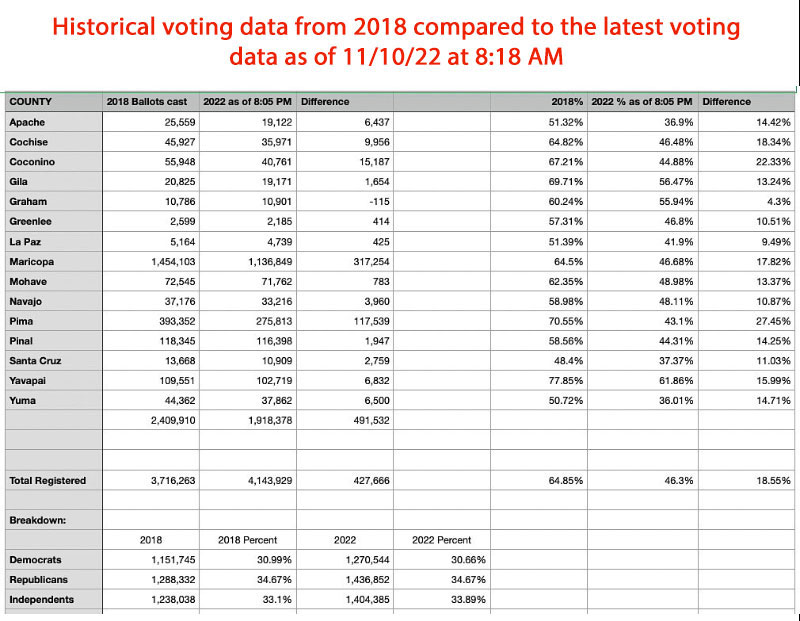 So, here is the very latest tally. Leads vary between less than 1% and about 10%. With an estimated 500K+ outstanding ballots, it is too soon to call any race. It is likely that there will be some lead changes throughout the next few days. Lead changes are normal, and, in and of themselves, do not necessarily indicate any kind of fraud or cheating. It's just that some communities tend to vote in similar ways.

For example, voters in Tucson tend to trend towards Democrat candidates, whereas voters in Prescott tend to trend to Republican candidates. So, if a lot of ballots come in from Pima County (which is where Tucson is) and they have a large majority for Democrats, it's to be expected. Frequently, voters using the Mail-In ballots will also tend to be Democrats, whereas many Republicans want to vote on Election Day. So, don't be surprised at spurts one way or another. 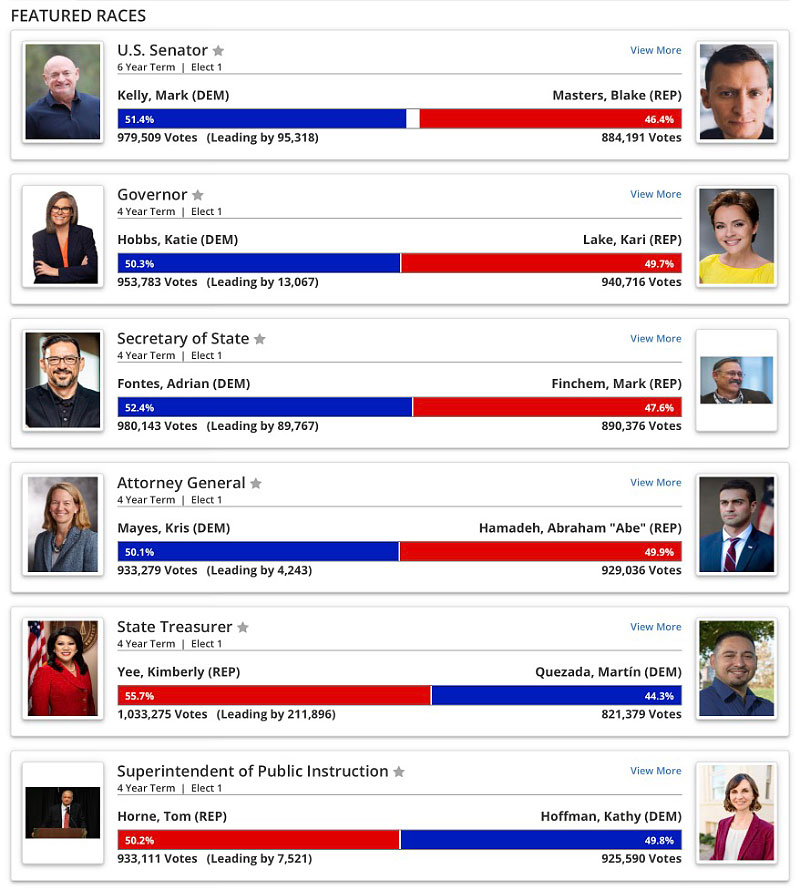 Are you interested in ballot measures? Here is the link to the current status. Keep in mind, these are not the final results. https://results.arizona.vote/#/ballotmeasure/33/0

So, after all of this, the best we can tell you is that it ain’t over yet. Not by a long shot. But, by law, the Board of Supervisors MUST canvass the results within 10 business days after the election.

That means that all Boards of Supervisors in Arizona must canvass (essentially, canvassing means to accept the results) by November 23, 2022. So, we should know what’s happening by then!