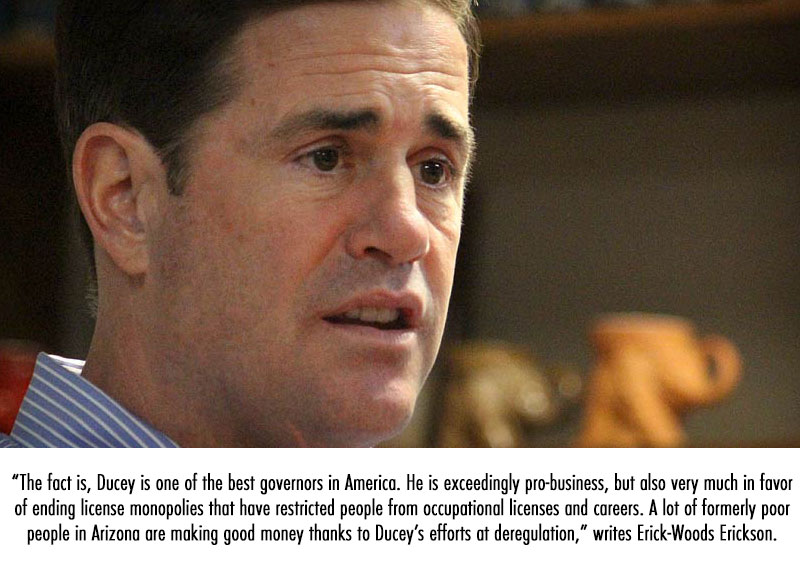 Erick-Woods Erickson writes a blog and produces a podcast called, “Confessions of a Political Junkie”

Erick-Woods Erickson considers himself to be a conservative, although in communities where RINO is a derogatory term to be used when anyone does not agree with their far-right Republican views, he might occasionally find himself wearing that particular label.
He doesn’t write to be liked or pleasing, he writes it like he sees it. Erickson calls himself, “A sinner with something to say and a microphone and keyboard to say it.”
Erickson writes in his post titled, Hope, “I am familiar with people who cannot tolerate disagreement and who define their friendships not by common ground, but by the uniformity of opinion.”
“But I am hopeful for conservatism and the GOP,” Erickson continues. “You should be too. Consider who looms on the horizon for 2024 and beyond.”
Following that, he names eight Republicans who offer hope and perspective for our country today. One of those is Governor Doug Ducey. Since Erickson is an observer who lives in Georgia, it’s interesting to see exactly how he perceives Ducey.

“Doug Ducey — like with DeSantis, if Ducey had a “D” next to his name, he’d be less hated in the press over the virus. The fact is, Ducey is one of the best governors in America. He is exceedingly pro-business, but also very much in favor of ending license monopolies that have restricted people from occupational licenses and careers. A lot of formerly poor people in Arizona are making good money thanks to Ducey’s efforts at deregulation.”

Others named in the article include:
You can find his blog here. It’s worth a subscription if you’re so inclined.