Journal of Prevarication: Hank and the Beanstalk Featured 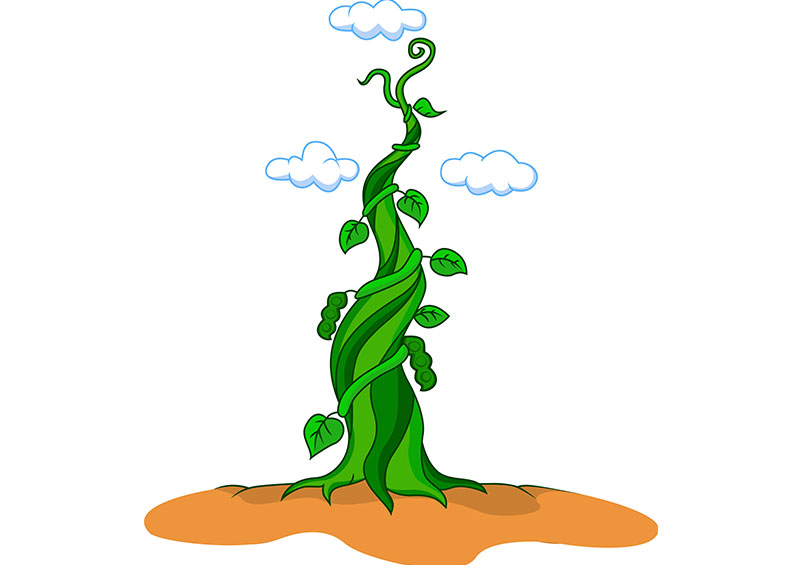 How do you feel about a beanstalk?

Once upon a time, in a place called Arizona, there lived a poor widow who had a son named Hank.

They were very poor, for her husband had mortgaged their ranch to invest in tech stocks, and then he died–or so the story was told. The widow and her boy were down to their last half-acre. Hank was big for his age, but too flakey to hold a job.

They had sold their furniture to buy food. Now they had only one possession of any value, a cross-eyed Guernsey milk cow named Nelda. Every day, Hank’s mother sent him to market to sell Nelda’s milk and use the money to buy grub..

But one day Nelda dried up, and they faced starvation. Because of federal budget cuts, they couldn’t get food stamps.

And off he went. It was a rare wet spring, much like this one. The desert was covered with pretty wildflowers, and really tall weeds. When Hank left a shovel stuck in the ground, it took root and the handle budded out.

Hank led the cow by her halter for a while, but then he decided to ride on Nelda’s back. The gorgeous wildflowers lifted Hank’s spirits, and he went whistling along until he met a butcher.

“Good morning,” the butcher said. “Where are you going?”

“I’m going to sell this cow so my poor widowed mother and I will have food to eat.”

“You’re in luck,” the butcher said. He pulled five beans from his pocket, and said, “What do you think of these?”

“Yes,” said the butcher, “they’re beans, but they’re magic beans. Plant them tonight, and tomorrow they’ll reach to the sky. Tell you what, I’ll trade you these beans for your cow. Then you won’t have to ride all the way to town.”

“Done!” cried Hank, who had been out chasing butterflies when brains were passed out.

Needless to say, Hank’s mother was not pleased with his bargain. She said, “You nincomtwit, what are we going to eat now?” and cuffed him about the head. She tossed the beans out the window.

When Hank awakened next morning, it was dark in his room. That was odd, because his mother had used his window curtains to make Hank a shirt.

Just outside his window, he found a giant beanstalk growing up to the sky, just as the butcher had said.

Hank commenced to climb the beanstalk to see how high it went. He climbed and he climbed, until the ranch house looked like a tiny speck below. Hank was having a hard time breathing at that altitude.

At the top, Hank found a wonderful new country, not anything like Arizona. In the distance, he saw a castle in a sort of Neo-Country Club style.

Hank was surprised when a beautiful maiden suddenly appeared beside him.

“Hi, Hank,” she said. “Listen, you don’t know me, but I know all about you. The giant who lives in yonder castle…”

“Don’t interrupt,” the beautiful maiden said, scowling. “Actually, he’s only about seven-foot-six, but he comes on like a real jerk. When you were just a baby, he swindled your father in a stock deal, then killed your daddy in a fight.”

The maiden continued, “The giant allowed you to live, on the condition that your mother would never tell anybody what really happened. So, Hank, all that the giant owns is rightfully yours.”

With that, the maiden disappeared in a puff of fairy dust. Hank shrugged and trudged off toward the castle.

The giant’s wife was standing at the door. Hank said, “‘Scuse me, ma’am, but could I trouble you for some breakfast? I haven’t had anything to eat since yesterday.”

The giant’s wife, Fannie, had a good heart. She said, “I can offer you our Country Bumpkin Special, with your choice of pancakes or biscuits and gravy, but you must be quick about it, for if my giant husband finds you, he’ll eat you up, bones and all.”

Hank had scarcely begun to eat his breakfast when there came a terrible knock on the door, shaking the faux stone walls of the castle. Fannie stuffed Hank into a cast-iron cauldron just as her husband came through the hole where, moments before, the door had stood.

The giant roared, “Fee, fi, fo, fum, I smell the blood of somebody dumb. Be he alive or be he dead, I’ll grind his bones to make my bread.”

Fannie convinced her husband, whose name was Winston, that he smelled nothing but the ox she had roasted for him. So he sat down and ate half of the ox. Then he asked Fannie to bring him two bags of gold so he could count his money.

Winston went to sleep counting his money. Hank climbed out of the cauldron, grabbed the bags of money and headed down the beanstalk. He and his widowed mother were now quite rich, but Hank couldn’t stand prosperity.

He climbed the beanstalk again. He had bought some new threads and Fannie, who was nearsighted, didn’t recognize him. When he asked for breakfast, she said, “Run away, or my husband will eat you, bones and all. The last boy who came here stole two bags of gold.”

Hank persisted and Fannie finally let him in and fed him breakfast.

Again, the giant showed up, hollering, “Fee, fi, fo, fum, I smell someone who stepped in cow dung. Be he alive or be he dead, I’ll grind his bones to make my bread.”

You guessed it: Fannie denied the presence of such a disgusting person. Hank hid in the oven while the giant played with a little brown hen who laid golden eggs–two golden eggs in the same day. Would I kid you?

When Winston dozed off, Hank split with the hen. Pretty soon, Hank and his mother were so rich that they had serious tax consequences.

Still, Hank wasn’t satisfied. He climbed the beanstalk again, but this time he sneaked into the back door of the castle. The giant came along, roaring, “Fee, fi, fo, fum, I smell the blood of an Arizona bum. Be he alive or be he dead, I’ll grind his bones to make my bread.”

The giant wasn’t the brightest bulb on the tree–giants rarely are–and his wife easily talked him out of the idea that someone was there. Then the giant called out, “Wife, bring me my golden harp.”

Fanny brought Winston the golden harp. The giant ordered, “Sing!” and the harp began to sing as melodiously as the Mormon Tabernacle Choir.

Well, as you can imagine, the music put the giant to sleep again. Hank grabbed the golden harp, but the harp called out, “Master! Master!”

That awakened the giant, who began chasing Hank, who headed for the beanstalk, the harp under his arm. Luckily, the giant tripped over a boulder and Hank got a pretty good head start.

As Hank neared the bottom of the beanstalk, he cried out, “Mother, Mother, fetch me my new chainsaw!”

She did, and Hank cut clean through the base of the beanstalk. As it fell, the top of the beanstalk reached over into the next county. The giant fell with a thud that Cal Tech measured at 4.6 on the Richter scale. His remains fit into a very small coffin.

By this time, the beans on the giant beanstalk had ripened and dried, and frijoles rained down for miles in every direction. In Arizona, that’s as good as food stamps.

Eventually, Hank was elected to the U.S. Senate on the strength of his yarn about the towering beanstalk and the condensed giant.