Maricopa County’s Recent history with Elections has been dismal. It’s not surprising that the Senate feels a responsibility to verify it.

On Wednesday, Senate President Karen Fann sent a letter to the Maricopa County Board of Supervisors to let them know about some issues uncovered by the auditors. She also invited them to a meeting at the Arizona State Capitol next Tuesday to address the issues that were found.

It is important to understand that from day one, as this audit was being contemplated and decided upon, there has been a standing invitation to Maricopa County Officials to be part of the process. They refused. If they had accepted and cooperated, they conceivably could have helped select the contractors and had a voice in determining the process. But they refused, and instead fought the audit in court.

Now, they are stalling again, and apparently throwing up roadblocks.

Maricopa County Recorder Adrian Fontes was elected in 2017. He was the first Democrat to run Maricopa County elections in recorded history. The previous elections chief was defeated, as Fontes promised better representation and communication with voters.

Unfortunately, there were problems in 2018, where 95 polling precincts didn’t open by 6 AM on election as required by law. Some places had voting machines that didn’t work, computers that weren’t set up,  poll workers that appeared to be clueless about their duties.

After the 2018 election, the Maricopa Board of Supervisors themselves ordered an audit at a cost of $200K to see what went wrong, hoping to prevent further election problems.

For the 2020 primary election, Fontes had a plan to mail a ballot to registered Democrats who weren’t signed up for the Permanent Early Voting List. Problem here was that plan wasn’t exactly one that fit within the confines of the law, as communicated by AZ Secretary of State Katie Hobbs and Attorney General Mark Brnovich.

Fontes is no longer the Maricopa County Elections official, having lost his position himself in the 2020 election. Stephen Richer, the new County Recorder ran on a platform of taking the nonsense out of the Recorder’s Office. “It’s time to make the Recorder’s Office boring again."

With that kind of history, is it any wonder that the Arizona State Senate felt that it was necessary to conduct an audit of the 2020 election to ensure the reported election results were the right results?

Here is a synopsis of the issues encountered during the Senate-ordered audit. The full letter from Senate President Fann will be included at the end of this article.

Non-compliance with the Legislative Subpoenas

On January 13, 2021, legislative subpoenas were issued to Maricopa County and the Board of Supervisors. This started a cycle of litigation, but in the end, the subpoenas were upheld by the courts, and found to be valid and enforceable.

The items missing: Virtual images of routers used in connection with the general election.

Response from Maricopa County? Providing the routers would, “...endanger the lives of law enforcement officers, their operations, or the protected health information and personal data of Maricopa County’s citizens.”

The County also asserted that producing the Internet routers for inspection would cost up to $6,000,000.

Fann, in her letter, offered to send agents of CyFIR, one of the subcontractors on the project, to Maricopa County facilities, and, in the presence of the Sheriff’s representatives, would retain custody and monitor the review of router data. Fann reminds them that the Senate is constitutionally entitled to this data.

Maricopa County response? So far, nothing.

No real answers yet from the County, just angry deflections to President Fanns list of questions. I thought she asked nicely.

Response: The County does not have custody or control of this information.

Fann: “...this information is belied by the County’s conduct of its own audits, which, if they were as comprehensive as they purported to be, almost certainly would have entailed use of the passwords to examine the tabulation devices, and it strains credulity to posit that the County has no contractual right to obtain (i.e., control of) password information from Dominion.”

According to Brahm Resnik, a reporter for 12 News, Dominion declines to comply.

NEW "No company should be compelled to participate in such an irresponsible act": Dominion Voting Systems responds to Arizona Senate Republicans' demand for passwords to ballot tabulators. pic.twitter.com/wjKI8ztwIj

Omissions, Inconsistencies and Anomalies relating to the Maricopa County ballots handling and storage of the ballots

1. No chain of custody documentation for the ballots

2. Bags containing the ballots were stored, but not sealed. The seal was found at the bottom of the box.

3. Batches within a box were separated by only a divider, with no indication of the corresponding batch numbers. Some batch dividers were missing.

5. Significant number of instances where the number of ballots in a batch and total on the pink report slip accompanying the ballots do not match.

1. The entire database directory from the D drive of the machine “EMSPrimary” has been deleted. This includes election-related details that appear to be covered by the subpoena.

2. The main database for the Election Management System (EMS) software, “Results Tally and Reporting” is not located anywhere on the EMSPrimary machine. “This suggests that the main database for all detection related data for the November 2020 General election has been removed,” Fann writes. “Can you please advise as to why these folders were deleted and whether there are any backups that may contain the deleted folders?”

Former Secretary of State Ken Bennett (he’s also the former Senate President) is the liaison between the Senate and the audit team. He also is the one who answers questions from the media. He spoke with Gateway Pundit to explain some of the issues that have been found. 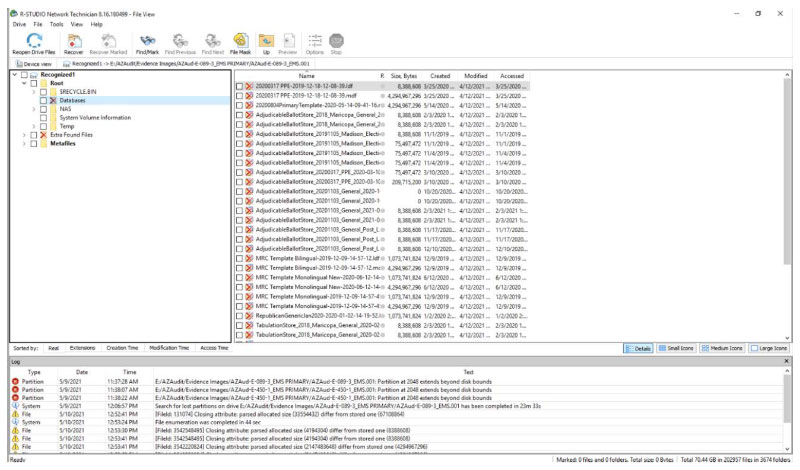 While many reports in the media claim that Senate President Karen Fann has backed off issuing subpoenas, that is apparently an unwarranted assumption. Instead, Fann offers an invitation, in hopes that additional subpoenas are not necessary.

"I am hopeful that we can constructively resolve these issues and questions without recourse to additional subpoenas or other compulsory process,” Fann writes.  "To that end, I invite you and any other officers or employees of Maricopa County (to include officials in the Elections Department) who possess knowledge or information concerning the matters set forth above to a meeting at the Arizona State Capitol on Tuesday, May 18, 2021 at 1:00 p.m. in Hearing Room 109.”

Fann also states that the meeting will be live-streamed. What Fann does not say is that subpoenas will not be issued, should representatives from Maricopa County choose not to appear. As noted earlier, Fann invited Maricopa County officials and staff to be part of this audit from the beginning. When they refused, she stayed the course and followed through in court and in conducting the actual audit itself.

In the meantime, as stated on the Maricopa Arizona Audit Twitter page,

Good morning! You know the rest... We won’t stop until every damn ballot is verified. 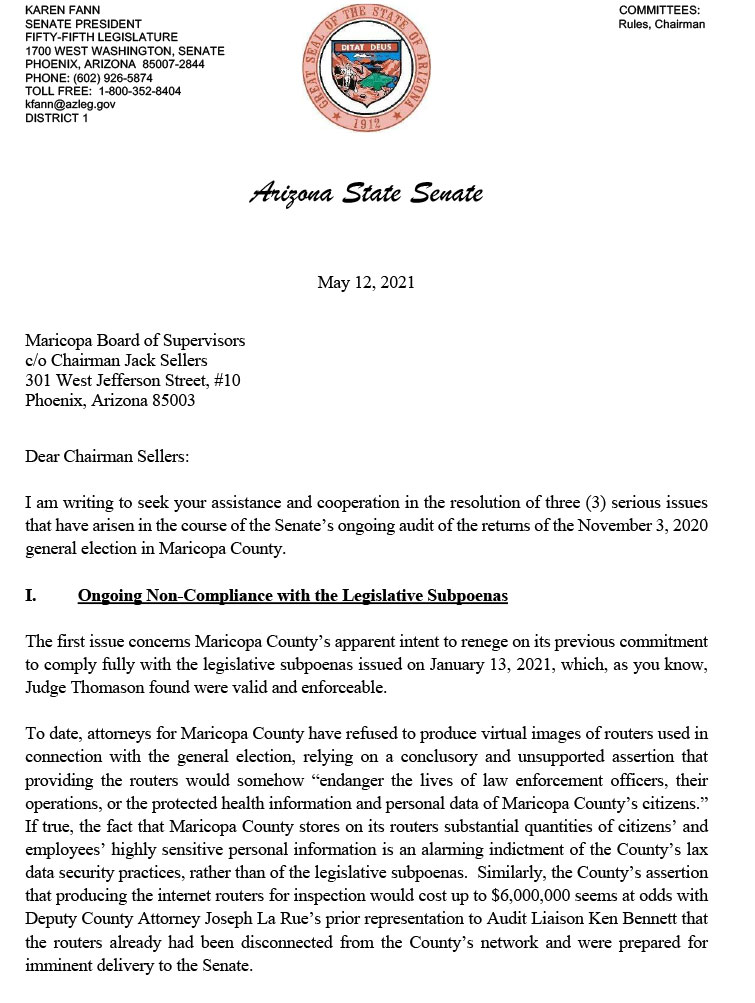 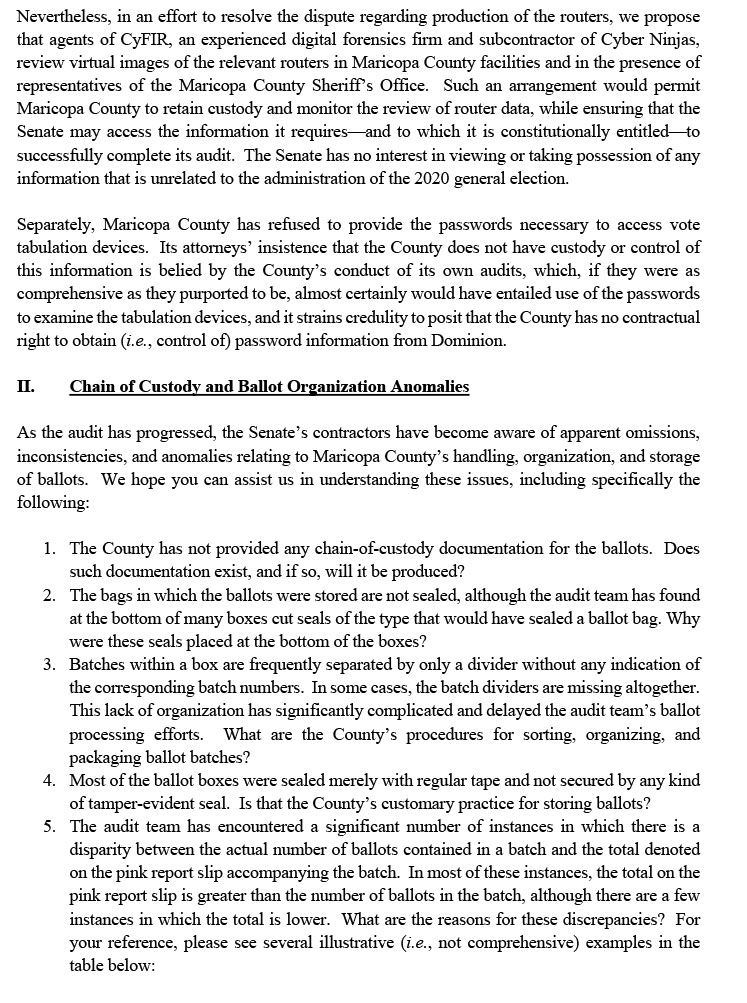 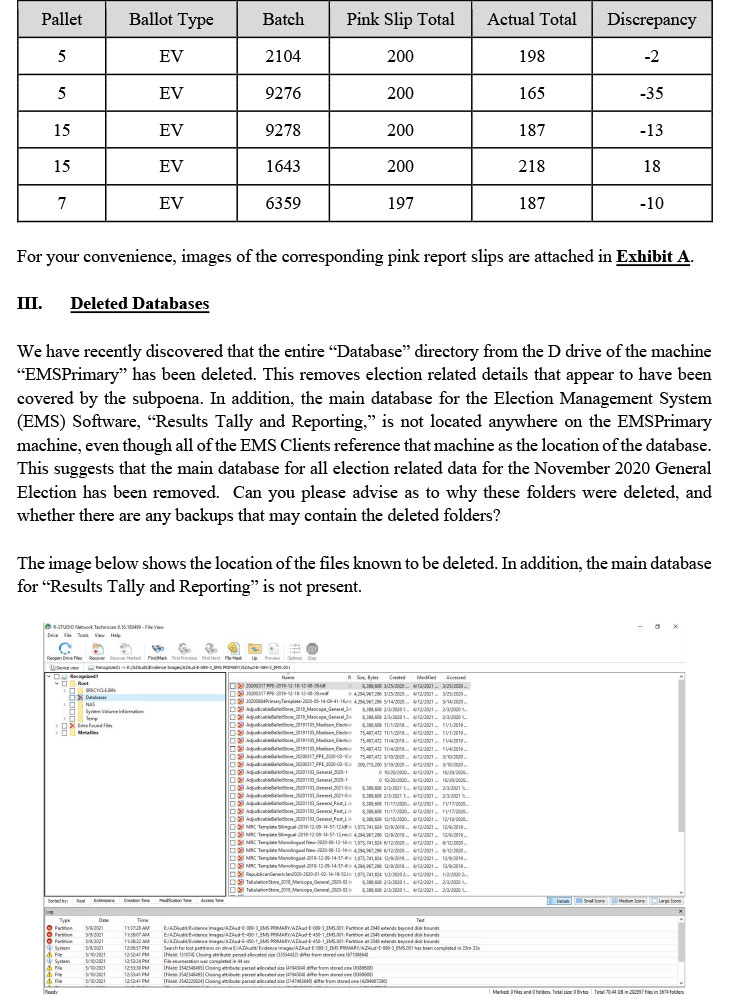 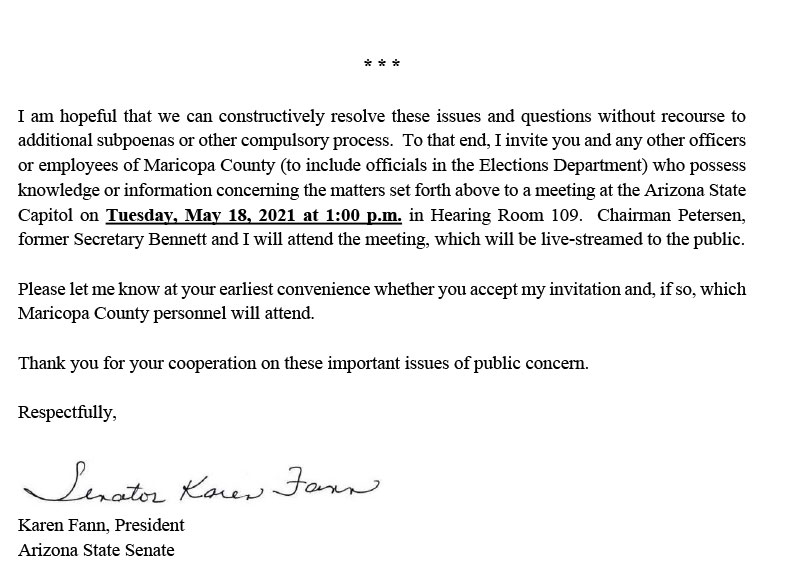 We have edited Exhibit A below, which is referred to in the letter above.

1. We put all the pink slip images on one very large image to make it easier for this online format.

2. We took the chart mentioned above, and put it below each of the “pink slips”, highlighting the row associated with that pink slip, in order to make it easier to understand.