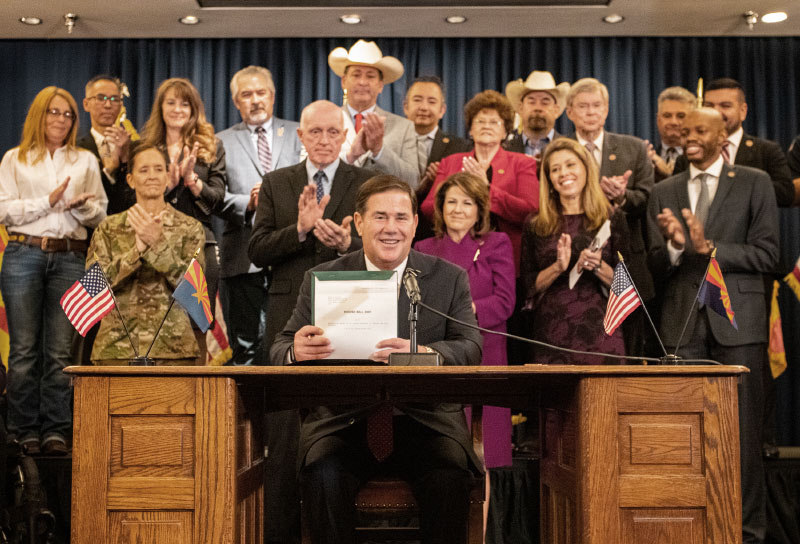 Governor Doug Ducey signed a bipartisan relief package on Friday to support firefighters and safety officials as they battle wildfires, ensure Arizona communities have the resources necessary for post-fire disasters such as flooding and reduce the risk from future wildfires.

The $100 million package passed with strong bipartisan support during a legislative special session called by the Governor after a visit to the Telegraph and Mescal Fires last week.

“We are in the midst of another catastrophic wildfire season, and it’s clear that we need to do more to fight these wildfires,” said Governor Ducey. “Many Arizona communities have already felt the impacts of this year’s wildfire season — people and pets have been displaced, homes have burned down, swaths of land have been decimated. I’m grateful that we were able to quickly come together in a bipartisan manner for the safety and protection of our communities. My thanks goes to our first responders working tirelessly to combat these fires, local and state agency leaders for their leadership during this time, and the legislators who worked across the aisle to get this bill passed.”
The wildfire relief package was led by a bipartisan group of legislators representing both rural and urban Arizona, including House Speaker Rusty Bowers, Representative Gail Griffin, Representative David Cook, House Minority Leader Reginald Bolding, Senate President Karen Fann, Senate President Pro Tem Vince Leach, Senator Sine Kerr and Senate Minority Leader Rebecca Rios.

“Thank you, Governor, for allowing us to work together, and thank you, Minority Leader Bolding and Leader Rios, for your help on an issue where we can come together for a common goal,” House Speaker Rusty Bowers said. “People who aren’t Republicans or Democrats – they’re just our friends and people.”

“I look forward to partnering with my colleagues on continuing bipartisan success because wildfires don’t care which party you belong to,” said Senator Sine Kerr, who introduced House Bill 2001’s mirror legislation in the Senate.

Arizona is currently in the midst of fire season, having already experienced 918 wildfires burning over 245,000 acres this year. The Telegraph Fire visited by the Governor last week is currently the sixth-largest wildfire in state history.

“There is no question that there was an enormous need to dedicate as many resources as possible to fight the currently active wildfires as well as to prevent future ones from occurring,” Senate Minority Leader Rebecca Rios said. “I applaud the governor for calling a special session to address this extraordinary wildfire season. This was clearly a major issue that needed immediate attention, and I’m grateful for Governor Ducey’s action in bringing bipartisan leadership to work together to address this critical need.”

“We must do what we are doing today to react to this emergency, but we must also do everything in our power to mitigate the crisis for future generations – and we must do that together,” House Minority Leader Reginald Bolding said. “Thank you again, Governor Ducey. My colleagues in both the Republican caucus and our caucus stand ready to work together and ready to move forward.”

The Governor was also joined by Department of Forestry and Fire Management Director David Tenney, Department of Emergency and Military Affairs Director and Adjutant General Kerry Muehlenbeck and Gila County Supervisor Steve Christensen.
“I’d like to thank the Governor for calling this special session on behalf of Gila County and rural Arizona,” said Gila County Supervisor Steve Christensen. “The leadership in Gila County says thank you for being an advocate for Arizona. I’d like to extend my thanks to the Legislature and their willingness to work in a bipartisan way.”

On June 9, the Governor issued two Declarations of Emergency in response to the Telegraph and Mescal Fires in Pinal and Gila Counties. The orders made up to $400,000 available for response efforts, and followed a request to the Federal Emergency Management Agency (FEMA) for a Fire Management Assistance Grant on June 6.

In March, the Governor signed Senate Bill 1442 to prevent wildfires by allowing for additional partnerships to employ Arizona inmates to clear forests of debris. The legislation aligns with the Arizona Healthy Forest Initiative proposed in the Governor’s budget which builds on proven methods to protect communities, while engaging individuals in state correctional facilities to equip them with new skills and reduce recidivism.