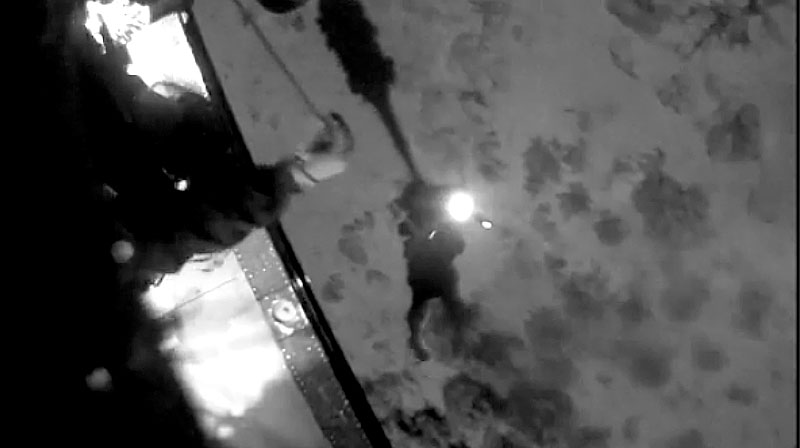 On the evening of January 26, the Arizona Air Coordination Center received information from the Cochise County Sheriff’s Office that a hiker was isolated and in distress in the Huachuca Mountains near Sierra Vista, Arizona.

The AMO Tucson Air Branch launched a hoist equipped UH-60 Black Hawk to extract the hiker and the deputies.  Upon arrival, in the dark of night, the Black Hawk crew lowered an AMO Aviation Enforcement Agent Emergency Medical Technician 150 feet to the mountains below.  The agent performed an assessment of the situation on the ground, accompanied the barefoot hiker on the 150-foot hoist back up to the hovering helicopter.  Suffering from exposure, hypothermia, and possible frostbite, the hiker was quickly flown to Montezuma Pass where CCSO Search and Rescue (SAR) medical personnel began warming the subject.  The Black Hawk crew returned for the SAR deputies and transported them to their vehicles.  After rewarming and evaluation, the Black Hawk crew transported the hiker to the Canyon Vista Medical Center for treatment.

“This is a mission that our aircrews train for every day,” said Deputy Director, Tucson Air Branch, Hunter Robinson.  “It’s not just about the securing the border.  It’s about working with the other members of the communities in which we live to keep them safe and get the job done.”

AMO safeguards our Nation by anticipating and confronting security threats through our aviation and maritime law enforcement expertise, innovative capabilities, and partnerships at the border and beyond. With federal agents and mission support personnel, aircraft, and marine vessels operating throughout the United States, Puerto Rico, and U.S. Virgin Islands, AMO conducts its mission in the air and maritime environments at and beyond the border, and within the nation's interior.