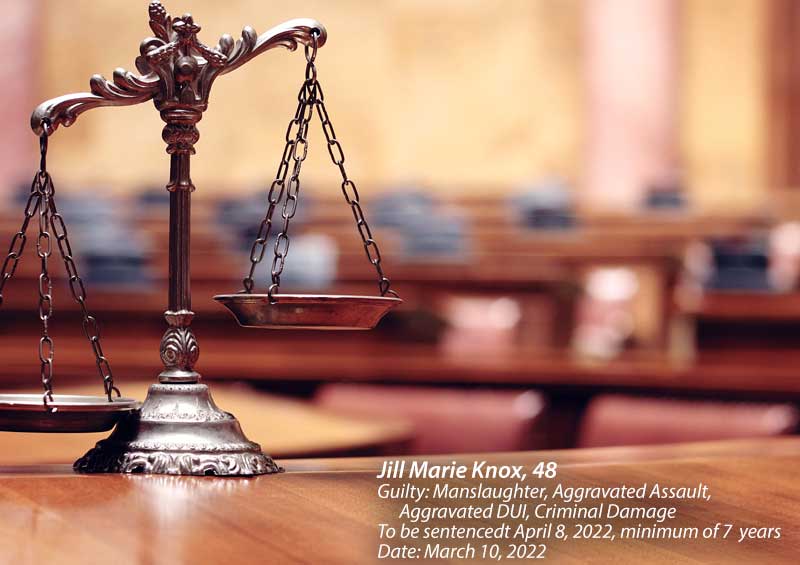 The case stemmed from a February 10, 2020 DUI collision in which a 5 year old child died

The case stems from the afternoon of February 10, 2020, when Knox was found to have been driving her black Chevrolet Suburban on Cornville Road towards Rimrock with a 5-year-old child in the back, who was not in a car seat.  Knox had driven left of center crossing over a painted double yellow line into oncoming traffic.  Knox collided head-on with one of the victims in a red Ford F-150 truck. The victim in the truck suffered several injuries and was life-flighted from the scene.  The 5-year-old child was flown to Phoenix Children’s Hospital where she died as a result of her injuries.  The Yavapai County Sheriff’s Office conducted a thorough investigation, and Knox admitted to taking multiple prescription drugs and using marijuana earlier in the day before she drove.

The Yavapai County Attorney’s Office would like to thank the jury for their service and to Deputy County Attorney Glen Asay and his trial team for their hard work that resulted in the guilty verdicts.

Sentencing is scheduled for April 8, 2022 at 1:00 p.m. before the Honorable Michael R. Bluff of the Yavapai County Superior Court.  Knox is facing a minimum of 7 years in the Arizona State Prison.