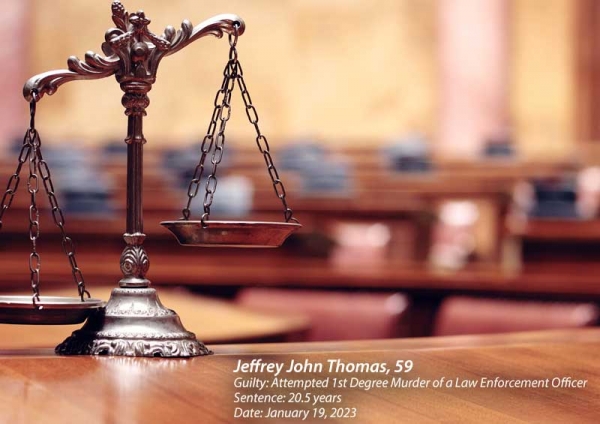 Jeffrey John Thomas was sentenced to 20.5 years in the Arizona State Prison

This afternoon, the Honorable John D. Napper of the Yavapai County Superior Court, sentenced Jeffrey John Thomas, 59, of Cottonwood, to 20.5 years in the Arizona State Prison, according to Yavapai County Attorney Dennis McGrane.

The events occurred on the evening of May 6, 2020, when Cottonwood police officers responded to a call regarding Thomas waving a “flagpole” and throwing rocks at vehicles. Officers tried to deescalate the situation without success. Thomas then fired a shotgun, which he had disguised as a flagpole with flag, at one of the officers. The officer was seriously wounded. A nearby neighbor also observed Thomas pointing a rifle from his bedroom and firing shots at the Cottonwood police officers. Upon the arrival of SWAT, Thomas surrendered.

County Attorney McGrane expressed his gratitude to the jury and thanked prosecutor Ethan Wolfinger for a job well done. “Our officers put themselves in harm’s way every day to keep us safe,” said McGrane. “The job of a police officer is unfortunately increasingly dangerous and, in this county, anyone who assaults a police officer should feel the full force of the law.”