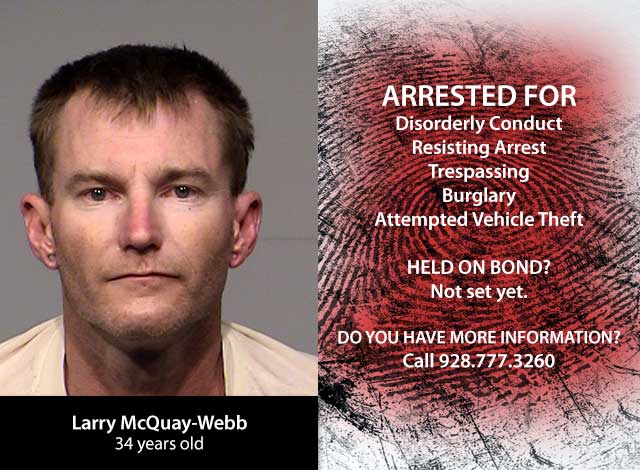 Preliminary information - Around 5 AM on August 30, 2020, deputies were dispatched to the 700 block of Cinnabar Drive, Cottonwood, regarding a domestic violence incident. The caller reported that 34-year-old Larry McQuay-Webb was attempting to steal her friend’s vehicle by towing it out of the driveway using a tow bar attached to his red Toyota 4-Runner. The caller’s friend is Webb’s estranged girlfriend. Webb eventually gave up trying to steal the vehicle after learning the Sheriff’s Office was on the way.  He left the vehicle partially in the roadway. Before leaving, Webb, who according to the victims routinely carries a handgun, threatened to shoot both of them. The caller noted she been staying with her friend after threats by Webb the previous day. Several children were also present in the Cinnabar Drive home at the time of the call for help.

The prior evening, Webb had brief contact with his estranged girlfriend and her friend while they were in the 3400 block of Del Rio Drive, Cottonwood. Webb threatened to ‘blow up’ their car and followed them until they were able to drive away. Webb continued threats via text messages that night.

Deputies located Webb’s vehicle at a home in the 3400 block of Del Rio Drive and contained the property. Attempts to contact him via cell phone were unsuccessful. Deputies learned that Webb had texted his father and confirmed he was inside the house and knew ‘the cops were there to arrest him.’ He still refused to surrender.

YCSO’s Quick Response Team (QRT) activated providing resources to deputies dealing with attempts to contain and arrest and Webb. Note: The QRT consists of specially trained, equipped and experienced personnel who can respond to assist Patrol supervisors and personnel in dealing with complex situations. If the situation escalates, the QRT lead will request the YCSO SWAT team. A short time later due to Webb’s ongoing lack of cooperation, apparent agitation and the likelihood he was armed, the YCSO SWAT team responded along with an armored vehicle to handle the incident and further negotiations.

As the SWAT team was staging, Webb surrendered and deputies arrested him without incident.

Detectives recovered a firearm inside the Del Rio Drive home.

Webb was booked into the Camp Verde Detention Center on charges including Disorderly Conduct, Resisting Arrest, Trespassing, Burglary and Attempted Vehicle Theft. Bond not set as of this writing.

Citizens can contact the Yavapai County Sheriff’s Office with information or questions at 928-771-3260 or the YCSO website: www.ycsoaz.gov