Journal of Prevarication: Look Out For Longnecks Featured 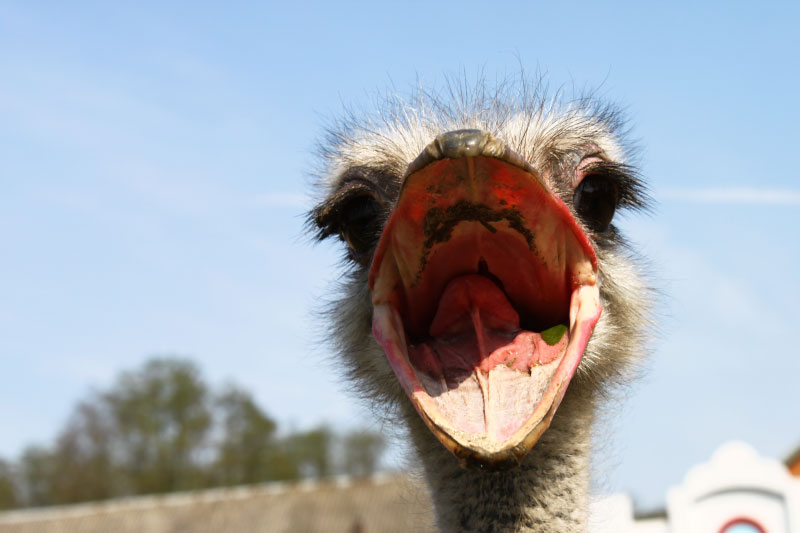 Unofficially, the ostrich is the official state bird of Arizona.

It’s a shame to spoil the scenery with warnings about the longneck...

This may be the nicest time of year to get out and see Arizona. The ice has long since broken up on the Santa Cruz River, and the days are getting warm.

Soon it will be summer, which is an even greater motive for getting out now. But now is its own incentive this year. Rains in January and February turned the desert a fresh green, decorated with gold and yellow flowers.

It’s a shame to spoil such a scene with warnings about the mean old longnecks, but I had to warn Miss Ellie the other day, and I need to warn you. It’s my job: making sure that everyone knows about the weird, threatening animal mutants that inhabit Arizona. (By the way, I was wrong about the Sacaton dragons.)

I wouldn’t want an ugly, mean longneck to catch Ellie by surprise. She does not deal well with suprises.

We’ve been running around the state a lot. Being a native, and somewhat smug about it, I took Arizona for granted until Miss Ellie came along. She sees beauty everywhere. This spring we’ve admired many layers of purple mountains, stacked against each other and the horizon, while the foreground just got prettier.

The other day we stopped at the ostrich farm at Picacho Peak to feed the gawky birds and buy some souvenirs. The woman running the store was very knowledgable about ostriches and their history in Arizona.

She hadn’t heard about the feral birds, though–the wild ostriches that lurk about, waiting to steal your food and scare the living hell out of you. We indigenous storytellers call them “longnecks.”

Unofficially, the ostrich is the official state bird of Arizona. He is reputed to put his head in the sand; official state officials have been accused of similar conduct.

Actually, the ostrich does not stick his head in the sand. He lays it against the ground, thinking that will make his 250-pound butt invisible, even though it is jacked up on stilts.

The male ostrich also lays his head against the ground in order to see beneath the feathers of the female ostriches. This pattern of behavior is not unknown among state officials.

Around 1890, Dr. J.N. Harbert brought breeding ostriches to his farm at Alhambra, northwest of Phoenix. (Harbert’s general store, built in 1892, is now an auto body shop on Grand Avenue near Osborn Road.)

Within a few years, ostrich ranches had spread from Cashion to Chandler; Cashion was in fashion.

Arizona produced 80 percent of the ostrich plumes grown in the United States; only South Africa produced more. The plumes were valued as decoration for women’s hats and clothes, and for use in feather dusters.

By 1914, however, the ostrich business was a dead duck. World War I had a lot to do with it. So did the automobile. Women riding in open cars had to tie their hats down, and ostrich plumes would have been crushed. Fashion is fickle.

A Chandler rancher bought 300 of the birds and had 14 cowboys herd them 30 miles or so across the Salt River Valley. An ostrich is flightless, but he is also flighty. Something spooked the birds, and they stampeded.

Rancher L.D. Rousseau and his wife were riding in their carriage, en route to a wedding. They would have been horrified enough to encounter a cattle stampede; you can imagine their feelings as a herd of ostriches flapped toward them.

The Phoenix Gazette reported, “In a feathered avalanche they poured upon the approaching rig and the horse bolted, overturning the carriage and throwing both occupants to the ground.” Mrs. Rousseau’s skull was fractured and she died instantly. Her husband suffered a dislocated shoulder.

Ostriches all but vanished from Arizona. The industry did not return to the state for more than 60 years. Now there are quite a few ostrich ranches scattered around.

However, some of those earlier birds escaped into the wild. Several generations later, their feral descendants lurk in the bushes, waiting to steal your granola bar or your eyeglasses.

Usually, they stay out in the country, but there have been rare sightings in the suburbs around Phoenix and Tucson, where ostriches were seen trotting along the streets and peering over backyard fences. They’ll unsettle your nerves. Trust me.

Have you ever visited with an ostrich close-up? They’re comical, when they are on the opposite side of a tall fence.

Extremely long necks emerge from their egg-shaped bodies. What ostrich cartoons in magazines don’t show you is that the neck of an ostrich undulates like a cobra. It’s weird.

Atop this ugly snake of a neck is a diamond-shaped head with a broad bill, and pop eyes that take in everything, including food. Ostriches have a very liberal definition of “food.”

A running ostrich has a certain dignity and grace. But when they’re just standing around thinking about food or sex, they’re a scruffy bunch. The average adult ostrich is about one sewer snake taller than an adult human. You don’t want to stand too close to the fence.

You also don’t want to see your campfire illuminating the undulating neck and the E.T.-like head of an ostrich lurking in the brush nearby.

“See what? Where? I didn’t see nothing…HOLY COW, WHAT IS THAT THING?”

One longneck, Old Milo, has become a legend along the Colorado River. He is reputed to have attacked and injured several people. What actually injures his victims is tripping over rocks, sleeping bags and boat lines as they try to figure out how to escape from this unexpected terror.

Once, about 5 a.m., Old Milo popped onto a beach where 20 young Christians were sleeping, during a spiritual retreat. The mass baptism by immersion was moved ahead by several hours.

It is believed that many sightings of the longnecks are not reported, because people are afraid they will be suspected of lying. Can you imagine that?

A small number of alcoholics and drug addicts have gone straight after encounters with Old Milo. Some went into 12-step programs, and some even looked for 24-step programs.

I’m not sure it was Old Milo I saw recently. He is reputed to have a harem, and several descendants, so I may have seen a younger bird.

We had taken a jet boat trip down the Colorado River from Laughlin to Lake Havasu City. The boat can scoot along at 40 m.p.h., but we were idling through the Topock Gorge, admiring the harsh, black rocks that form the east wall of the gorge.

We were told we might see a desert bighorn sheep there. The tour company’s brochure does not list feral ostriches among the attractions of the Topock Gorge.

What I saw first was a party of four people in swim suits, two men and two women, scurrying toward their boat, which they had tied to a bush on the bank. I also saw what looked like a strange, grey bush. The leaves looked like scruffy feathers.

Then I saw the neck, coming up like a cobra responding to a snake charmer’s flute. Big pop eyes took in the whole scene. Ostriches often seem amused by what they see. His neck shot out and around, and he picked up something from the ground.

I started to say something to my companions, but our boat driver decided we were late for lunch in Lake Havasu. She gunned the engine and the boat rose up in the water like a departing duck.

I looked back at the longneck. He had a cell phone in his beak. He ingested it in one gulp, like a snake swallowing a rat.

Rate this item
(0 votes)
Last modified on Sunday, 16 May 2021 01:56
Published in Wickenburg.news
Tweet
Tags
« Wickenburg Christian Academy Prepares with Prayer It Took Just One Day to Raise Funds to Test DNA from 'Little Miss Nobody' »