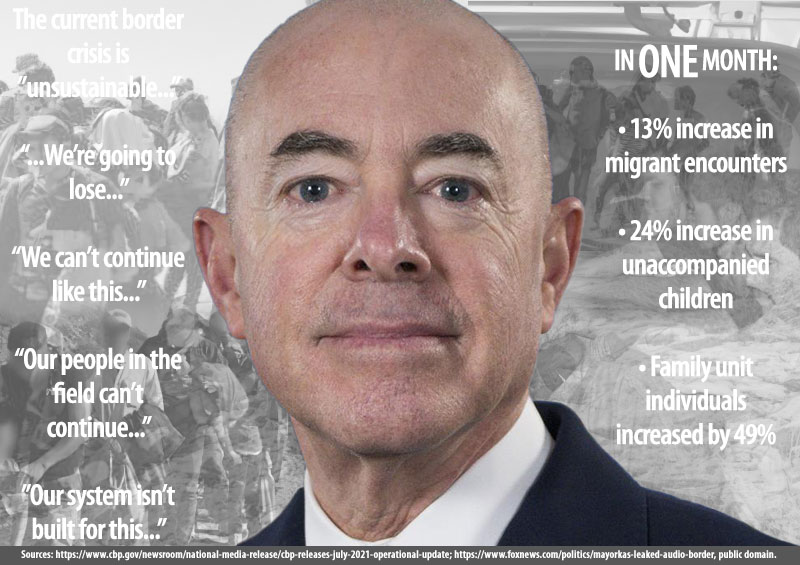 Governor Ducey: “A defeatist is not what we need when it comes to fighting for border security. It is time for Secretary Mayorkas to resign”

in which Mayorkas called the border crisis “unsustainable,” said “these numbers cannot continue” and said “if our borders are the first line of defense, we're going to lose.”

“A defeatist is not what we need when it comes to fighting for border security,” Governor Ducey said in response.

This comes after months of failures at the border by the Biden-Harris administration, whose misguided policies and botched communication have created this crisis and led to the .

Mayorkas also said he was “very well” aware that portions of the border came close to “breaking” recently, according to . “We can't continue like this, our people in the field can't continue and our system isn't built for it,” Mayorkas reportedly said.

Governor Ducey’s full statement is below:

“Unlike Secretary Mayorkas, Arizonans understand that strong borders are essential to public safety and national security. The Biden-Harris administration’s record of failure on this issue has led to this moment. President Joe Biden and Vice President Kamala Harris, through their words and their actions, have signaled to the world that America’s southern border is wide open and unprotected.

“We knew how bad the border crisis has gotten: 21-year record-breaking surges in illegal immigration. Law enforcement and humanitarian groups at a breaking point. Young children enticed to make the dangerous journey to cross the southern border. Drugs flowing into our communities. Cartels essentially in control of vast swaths of territory south of the border. And now, Secretary Mayorkas has confirmed our worst fears.

“Today we are seeing the truth of what’s playing out behind closed doors — what the federal government isn’t telling the American people. Chaos, dysfunction and a defeatist attitude has infiltrated the highest level of the U.S. Department of Homeland Security. This administration has completely lost control of the border. And with his comments, Secretary Mayorkas demonstrated that he fully understands the catastrophe playing out at the border, and yet he lacks the skill, ability and will to address it adequately.

“The buck must stop somewhere. A defeatist is not what we need when it comes to fighting for border security. It is time for Secretary Mayorkas to resign, and for him to be replaced with someone who will tell the American people the truth publicly, stand up to the radical activists inside the Biden-Harris administration and once and for all end the crisis at the southern border. The safety of Arizona and our entire nation depends on it.”

Governor Ducey in April  to the state’s southern border. The Governor also  to immediately fund the mission with $2.5 million as well as $200,000 for county sheriffs.

In June, the  the FY 2022 budget, including $25 million in state funding for the National Guard border mission and $30 million to assist law enforcement with border security operations, in addition to existing funding for the Border Strike Force.

In July, Governor Ducey to continue Title 42 border protections and called on Congress to protect Title 42 from future Biden-Harris interference.

In March, the Governor warned  that President Biden putting Vice President Kamala Harris in charge of the border would lead to problems. President Biden “trivialized this issue by putting someone in charge that flat out, just doesn't care,” said Governor Ducey at the time.