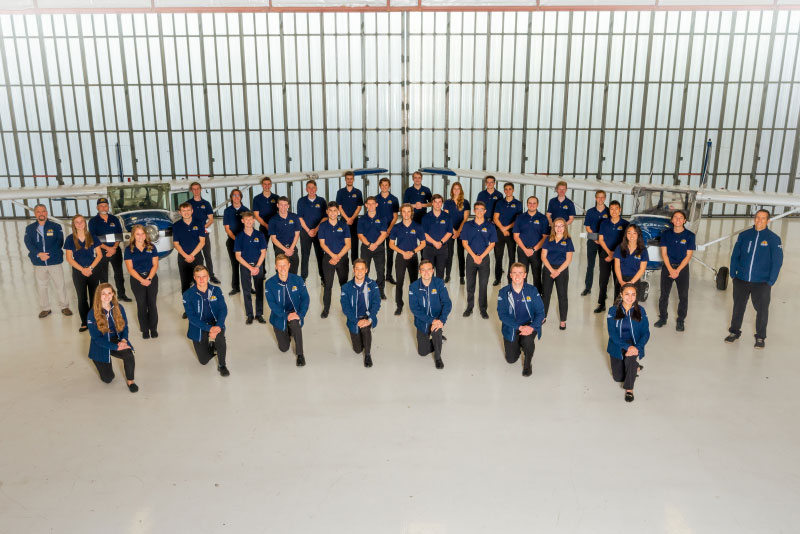 The Golden Eagles Flight Team adds another championship sign to their entry!

PRESCOTT, Ariz. –  The results are in, and Embry-Riddle Aeronautical University’s Golden Eagles Flight Team will be adding another championship sign along the entrances to the Prescott Campus off of Willow Creek Road. The team won the 2021 NIFA SAFECON (National Intercollegiate Flying Association’s Safety and Flight Evaluation Conference) Championship, making them 13-time national champions and the winningest collegiate flight team of the past 25 years. 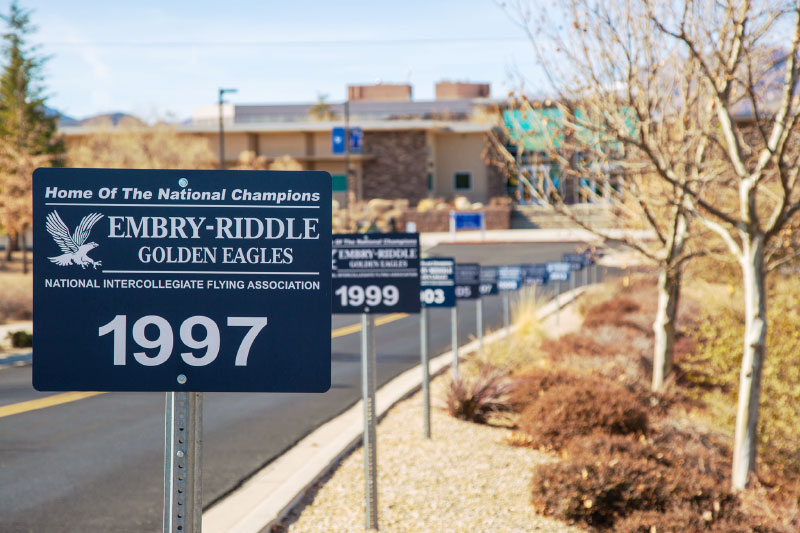 NIFA SAFECON is to collegiate aviation what the Super Bowl is to the NFL or the Stanley Cup is to the NHL. Twenty-eight teams from universities across the country competed this year in a variety of events, such as Aircraft Preflight Inspection, Aircraft Navigation, Aircraft Recognition, Computer Accuracy, Ground Trainer, and others. 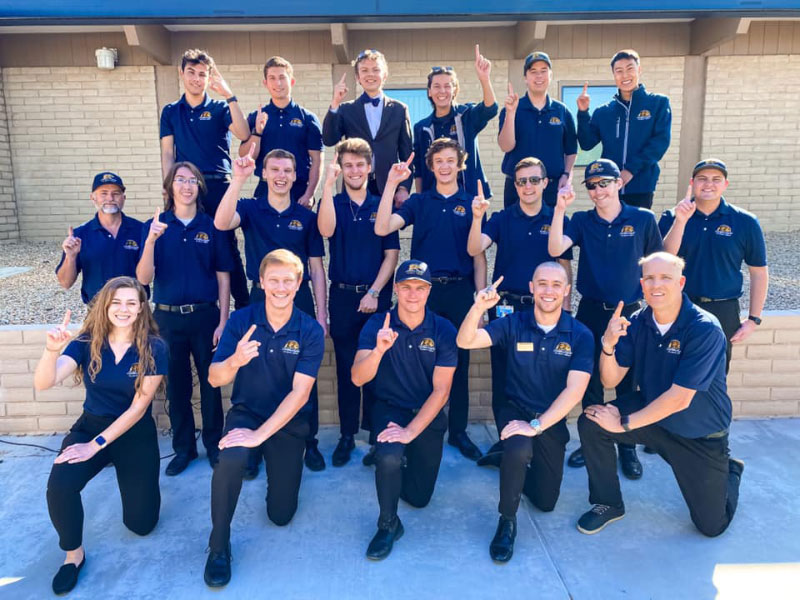 “I have been a member of the team since 2016, and in my time here I have never seen the team work harder than they did this year,” said team captain Colin Ho-Tseung.

The Covid-19 pandemic posed the biggest challenge to the team this year, affecting practice schedules, protocols and procedures. Additionally, competition, normally held in-person by one of the competing universities, took place virtually.

“I am so proud of the team’s level of perseverance and the many obstacles that we had to overcome in the last 10 months,” said head coach Shaun Shephard. “There were numerous times where we didn’t know what was going to come— we had an extended winter break, our regionals were pushed to February, all of our meetings and practices were social distanced, and we had very little time for the team to come together. We were taken out of our comfort zone.”

Being a member of the flight team is a tremendous time commitment. Members are required to attend ground event practice three hours a week and all day each Saturday. In preparation for competition, it often takes another 10-20 hours of studying each week to achieve peak performance. In addition, members spend dozens of hours practicing flying events each week, including precision landings and navigation. 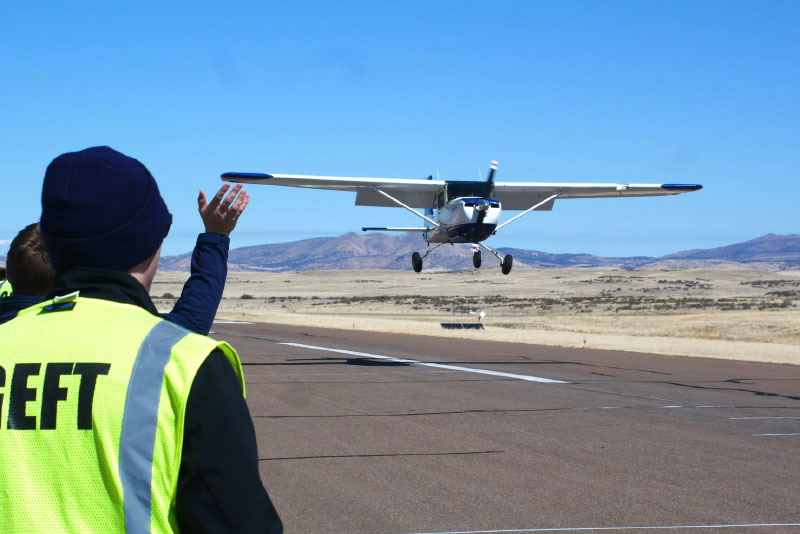 Students from any Embry-Riddle degree program are also welcome to join the Golden Eagles. Although the majority are aeronautical science (flight) students, several engineering, global security and intelligence, and air traffic control students are also part of the team.

“The next goal for our team will be to figure out how to defend our title,” added Ho-Tseung. “Next year's officers have already begun meeting to discuss strategies and to recap this wild past year.”

To view the final results of NIFA SAFECON 2021, including individual performances, go to:  https://nifa.aero/wp-content/uploads/SAFECON-2021-Official-Results.pdf

The 2022 NIFA SAFECON Nationals are scheduled for next May, in-person at The Ohio State University in Columbus, Ohio. 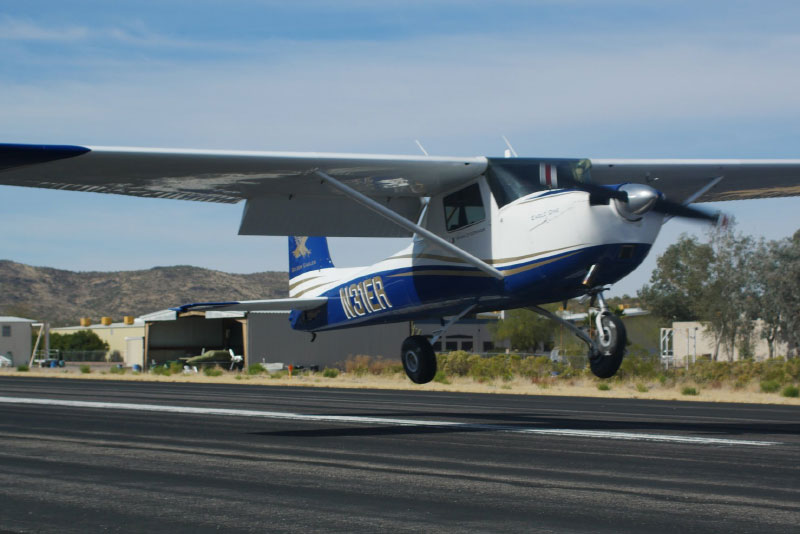 Embry-Riddle educates 33,500+ students at its residential campuses in Daytona Beach, Florida and Prescott, Arizona, at approximately 125 Worldwide Campus locations and through online degree programs ranked by U.S. News & World Report as being among the Nation’s Top Five.

Twitter
Rate this item
(0 votes)
Last modified on Thursday, 27 May 2021 01:11
Published in Azeducation.news, Prescott.news
Tweet
Tags
« Teacher of the Year Nominees & Winners Honored Potential Monsoon Rain and Flooding This Week »
back to top