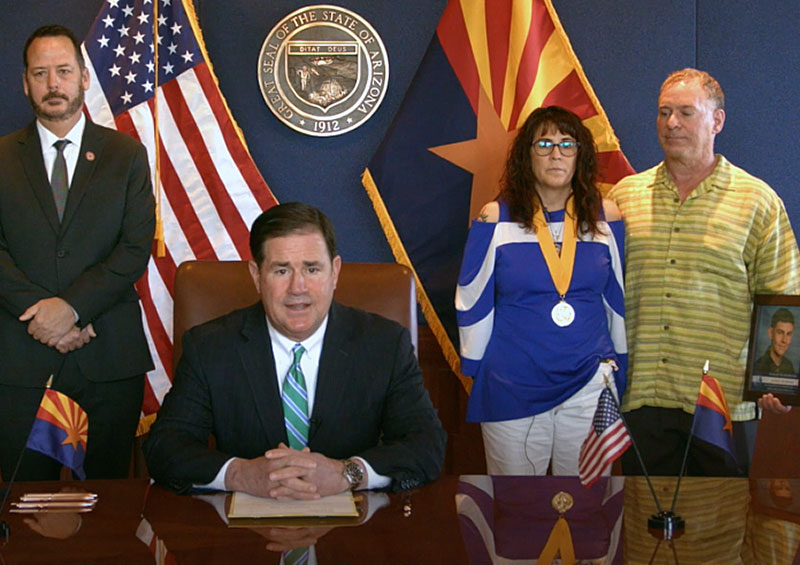 Encourage a minor to commit suicide - get charged with manslaughter

The Governor signed the bill in the presence of Paolla Jordan, whose son committed suicide two years ago, and Representative Jeff Weninger.

“Protecting Arizona families is our number one priority — and while there’s always more work to be done, this is a step in the right direction,” said Governor Ducey. “Thank you, Paolla, for sharing your story. You created this change, and it wouldn’t have happened without your dedication to protecting other families. And thank you, Representative Weninger, for leading on this important legislation.”

“Our hearts are with Paolla, her family and all Arizonans who have suffered the loss of a loved one to suicide,” said Representative Weninger. “HB2459 penalizes individuals who encourage minors in a vulnerable state, and it will help protect young Arizonans and their families. I was honored to work on this legislation with Paolla and offer support to those facing difficulties with mental health.”

The legislation is in honor of Adrio Romine, a 17-year-old who tragically took his life after an adult on the internet encouraged and advised him. Adrio’s mother, Paolla Jordan, shortly after his death learned the individual gave her son specific instructions on how to end his life — but no law was broken at the time. Paolla pushed legislation to change that, resulting in the development of HB2459.

"I hope that no other parent has to go through what our family experienced,” said Paolla. “There are dangerous people out there that can prey on our children on the internet. Today there is a consequence for a predator’s actions. This law will help protect our children today. I was proud to work with Representative Weninger on getting HB2459 Laloboy Act through the finish line, and I am grateful to everyone working to protect children facing suicidal thoughts.”

The Governor issued a proclamation recognizing September 6 - 12, 2020 to be Suicide Prevention Awareness Week in Arizona to raise awareness of the issue of suicide and highlight services available for those in need.