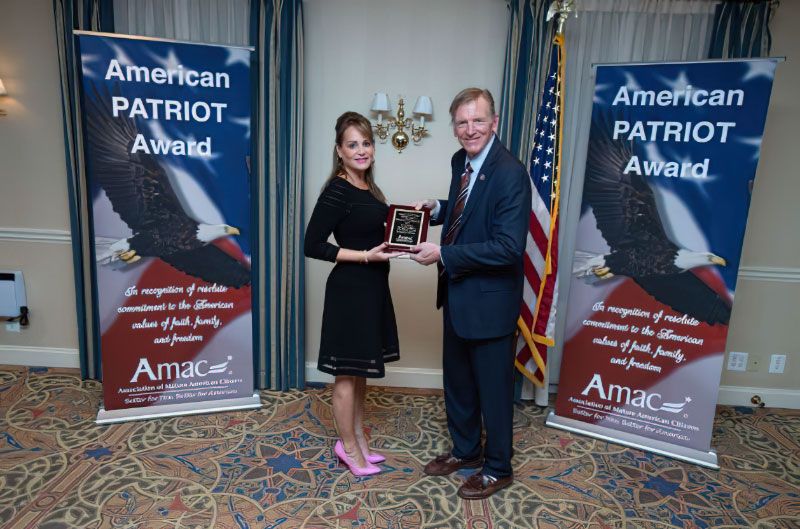 Prescott, AZ - Representative Paul Gosar, DDS (AZ-04) issued the following statement after receiving the coveted American PATRIOT Award by the Association of Mature American Citizens (AMAC) for consistently standing up against harmful policies and promoting the American values of faith, family and freedom for American seniors.

“I am proud to have once again been recognized by AMAC for my work on behalf of Arizona’s seniors.  Every senior deserves our gratitude and commitment to protect their health and retirement benefits they are promised by the federal government.   I will continue to fight to preserve these rights and oppose radical government policies that harm their values and way of life,” concluded Congressman Gosar.

AMAC Action President Bob Carlstrom said: “Congressman Paul Gosar has consistently defended the free enterprise system and the American values of faith, family, and freedom while pushing back against government overreach. As this administration doubles down on legislation that will dramatically expand that welfare state and hike taxes on the middle class, Congressman Paul Gosar continues to lock arms with AMAC and our 2.3 million members nationwide against these destructive ideas.”

The American PATRIOT Award was first conceived by Dan Weber, AMAC’s late founder – and the tradition carries on to this day. AMAC offers an alternative perspective on how to best solve the most pressing problems facing mature Americans and their families across the nation. There are over 2.3 million AMAC members nationwide including 17,599 in Arizona’s fourth Congressional District.