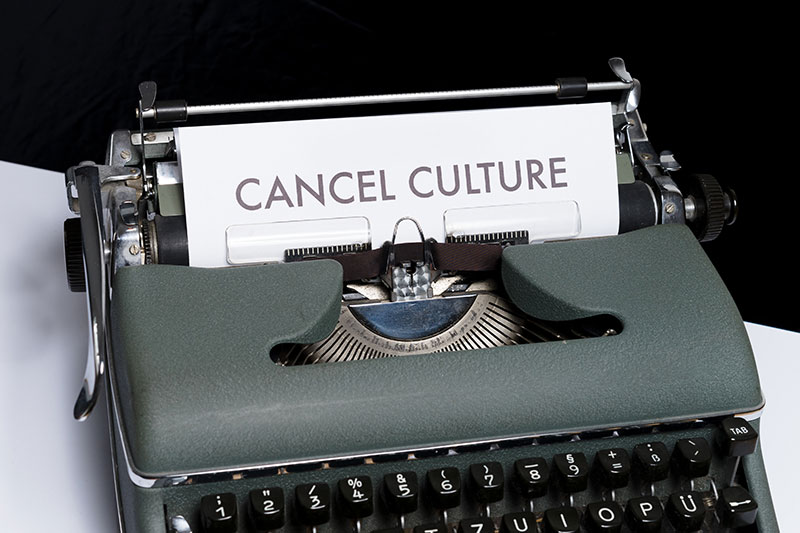 No one will be safe in society’s current cancel culture.

Should you lose your job for retweeting a political post in 2008 from someone who it turned out also said things sympathetic to white nationalists that you were unaware of? What about agreeing to take a selfie with someone at a conservative event who you found out later had attended a white nationalist meeting? Are you responsible for spending hours researching everyone’s history you encounter on the internet before you repost anything by them? This is where society is headed with the cancel culture. No one is going to be safe from the false cries of racism, sexism, homophobia, Islamophobia, etc.

Right now, most of us heave a sigh of relief when we hear about it happening to someone else, glad it wasn’t us. But hardly anyone is safe for long. Since the left can’t substantively refute our political arguments, they are resorting to drastic measures to silence us. This latest tactic is a gold mine for them because most people have a history on social media going back years. Years of things you’ve said every day to comb through. Who hasn’t said something in a stage of rage or while taking some medication or alcohol, that could be misinterpreted as offensive? If you make your account private, they can find a way to pretend to be someone who knows you and sneak in. Or maybe it’s a former friend who turns on you. If you delete your account, they can go to archive.org where tweets are stored forever. If you post under a pseudonym, they often have ways of figuring out who you are.

You might think, “No, never done any of that, I’m safe.” But the line of what constitutes racism, sexism etc. keeps moving further and further out, so what was considered perfectly acceptable in 2010 won’t be in a few years.

People in high-profile positions are the most vulnerable. If the left views you as influential, whether through well-reasoned political debate or financially well off, you’re a prime target. And frankly anyone involved in conservative politics is at risk. They want to silence us, so the more you post on social media, the more you stand out and make yourself a target.

The left’s hypocrisy can be seen in the way it’s now treating the Founding Fathers. The left claims the moral high ground with the advantage of 20/20 hindsight. But their moral high ground is still changing. What they found perfectly acceptable merely 20 or 40 years ago is now morally repugnant.

Yet they give their own a free pass. They’re forgiven, but conservatives aren’t. The late prominent Democratic Senator Robert Byrd was a member of the KKK who organized and led a 150-member chapter, but they don’t care today. You don’t hear about people flipping out over the 23 buildings and roads his name is inscribed on. Only one inscription has been removed. Nothing has been destroyed or defaced. The only reason the left hasn’t started going after people descended from slaves is that they are predominantly Democrats, since it was mostly Democrats who owned slaves.

Hillary Clinton and Barack Obama once strongly defended marriage as between a man and a woman, as recently as 2008. But the left gives them a free pass now -- they’re never attacked for being homophobic -- while those on the right who have Biblical objections to homosexuality are.

The right has only had a small amount of success pointing out statements made by those on the left in the past, mainly by going over journalists’ tweets. Some are disciplined by their employer and even fired. But they’re the minority. MSNBC talk show host Joy Reid made not just one, but two rounds of tweets ridiculing gays. She apologized, and predictably, the responses to her apology divided down party lines. MSNBC did nothing and she is still a host there. In fact, she appears to have been promoted recently, now hosting The ReidOut, a new Washington-based weeknight show in the key 7 p.m. Eastern time slot.

This nasty practice isn’t going away unless people start pushing back. How many of us lie in bed at night wondering how far down the road someone is going to dig and discover something we wrote years ago? Twitter fortunately only goes back to 2006, with its first growth spurt of people joining beginning in 2007. But more and more of the early internet is becoming easier to find and access. What you wrote on some 1990s listserv will soon be easy to find. The first website you ever created? Your posts on IRC? The younger generations may be in trouble now since they were coming of age and less cautious when they first ventured on social media. But eventually everyone will be susceptible except the rare few who have stayed off the internet.

This is a Pandora’s Box. The question is how to put the genie back in the bottle. Do we fight back by exposing all the improper or supposedly improper things that leftists have said in their pasts? Since they’re less likely to be constrained by Judeo-Christian values, they will have far more writing full of profanity and offensive statements. Or, since they have shown that they will give their own a free pass most of the time, do we attempt the difficult process of ending the practice? Regardless of what we do, this is merely part of a broader problem. The left is going to continue to get those on the right fired for things they say today, by pretending it’s racist or even forging screenshots to make us look racist.

So far it looks like the black conservatives who are speaking up are having some success with the pushback. They’re tired of having their businesses destroyed by violent white Antifa. They’re tired of being called coons and worse things by leftists. And more blacks are becoming conservative. Tellingly, a friend of mine in Kenya told me that 85 percent of the population supports President Trump. They see through the false cries of racism and wish they had the privilege to live in the U.S. Radical black activists claim they want to move to Africa because the racism is so bad here. But they rarely do, because while white-black racism is rare in most countries there; it’s tribalism that is prevalent, and if you aren’t part of a tribe, you are going to have a really hard time functioning in society.