Opinion: Why Polls Shouldn't Matter to You Featured 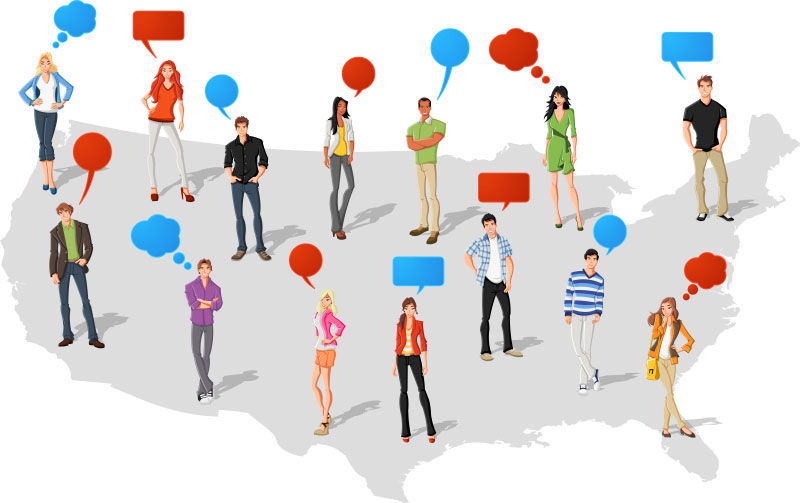 Polls don’t really matter in the long run. Here’s why.

It’s the time of year that every pollster and interpreter-of-polls come out of the woodwork. They don’t just have their own crystal balls, they have very finely tuned crystal balls that they have crafted and perfected to their own preferences.

There are two things you can believe for sure: One, everyone’s poll is actually a more-or-less educated guess. Two, there is no poll in the world that should ever keep you from exercising your precious freedom to vote.

Just in case you’d like to try to make some sense of the madness out there, there are certain things to recognize.

Anyone can call themselves a pollster.

The definition of “poll” in today’s world is, like so many other things, very loosely defined. Pew Research writes with brutal honesty, “The barriers to entry in the polling field have disappeared.”

Check out, "Key things to know about election polling in the United States".

In other words, pretty much anyone can call themselves a pollster. Which means, it may or may not be scientifically based.

Take for example, Red Wing, Minnesota's Hanisch Bakery and Coffee Shop poll. Every four years, Hanisch Bakery sells cookies that are either for the Republican President Candidate, or the Democrat President Candidate. The purchase of one $4 cookie counts for one vote. Stuffing the ballot tally is perfectly legal in this situation - go ahead and buy a dozen if you like. Not 18? No worries. Not registered to buy? Not a problem. It’s all good.

Hanisch Bakery claims a 32 year win streak, but with a caveat, “Our cookie poll has always followed the popular vote, including in 2016 for Hillary Clinton and 2000 when Al Gore won.”

Now, after a certain incident, they no longer give out numbers on Election Day. “…one guy came in and bought however many Romney cookies he needed to put Romney in the lead,” Bill Hanish said. “He didn’t even get the cookies – he just gave me the money.”

Has Trump’s lead diminished over the last month with all that has happened? Nope.

Fun? Yes, it really is. Delicious? Absolutely! Scientific and methodical? Probably not, but we hope that Hanisch Bakery makes a small fortune from their labors!

The election is not decided by popular vote. It is decided in the Electoral College. Each state has a pre-determined number of votes based on number of Congressmen plus Senators, which is largely decided by population. But, it allows each state to have a say in who becomes President.

The Electoral College is the reason it is possible for someone to win the popular vote, but not be elected as president.

A national poll may be interesting, but it is largely insignificant. The only relevant polls are the individual state polls.

Every pollster in the game has a bias.

Want proof? Find out who hired them, where their organization originates from, and how they ask their questions.

Some polls are hired by Republicans, some by Democrats. Some are sponsored by universities, others by media publications.

This is all ok, if you know what is happening. But, many of these pollsters try to keep that information hidden.

The first thing to ask is, “Who paid for this poll?” After all, it’s always good to know who you’re talking to. If they don’t want to tell you, or if they give some generic-sounding name, take note.

Polls based on Registered Voters cannot be trusted.

Just because someone is registered to vote, doesn’t mean they will vote.

In Arizona’s Yavapai County, 84.47% of registered voters cast a ballot in the 2016 presidential election. That is a very high voter turnout, and residents in Yavapai County deserve high kudos. 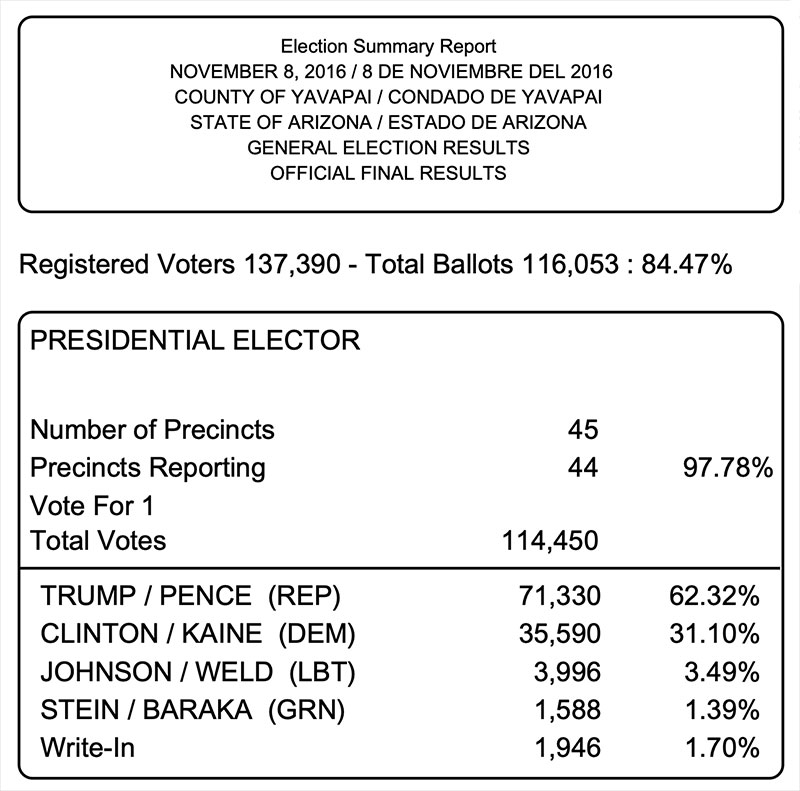 It was the highest 2016 voter turnout in Arizona by far as displayed on the Arizona Secretary of State website.

All together, Arizona’s voter turnout was the 12th highest in the nation, as seen in this chart below. (Please note, the information in this chart was gathered from many sources, and should be considered as approximate.) 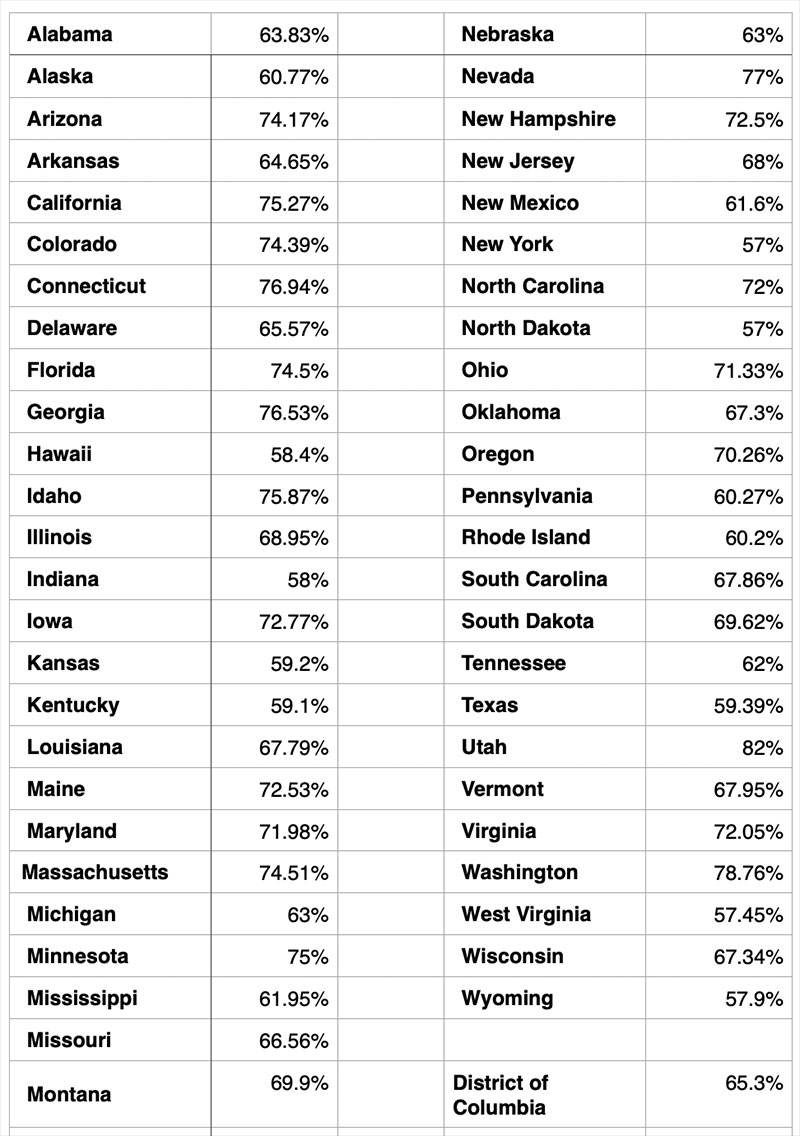 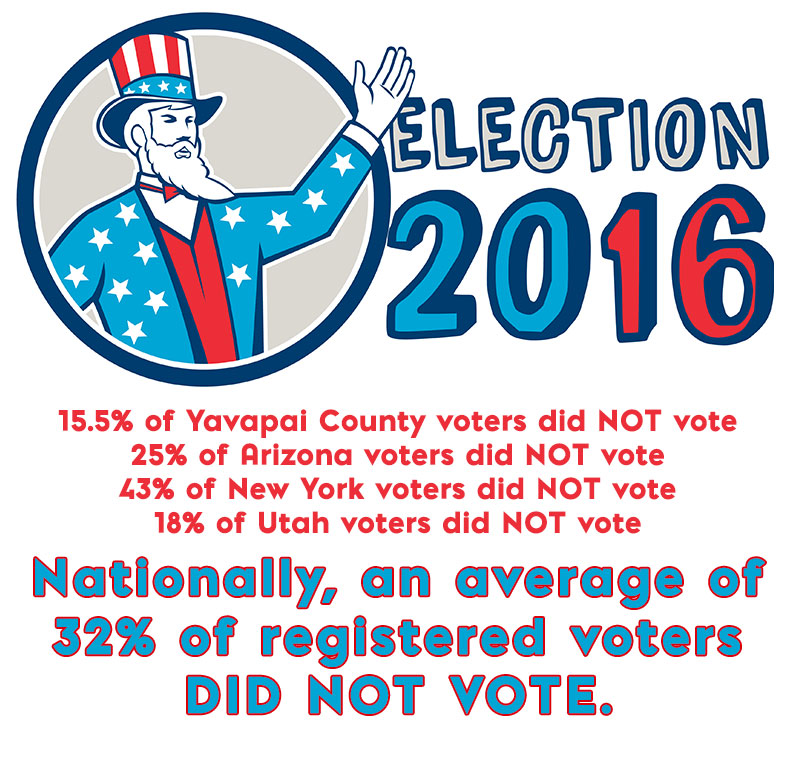 In other words, in a national poll using only registered voters, you should probably ignore about 32% of the responses.

Forget that. You are much better off with polls that use likely voters.

Speaking of registration rolls, some states still include people that died more than five years ago. Federal law requires that voters be removed from the registration rolls if they have died or moved - but only after they don’t vote in the next two federal elections!

NPR explains, "If the state thinks that a voter has died or moved and is no longer eligible, they can be taken off the rolls, but only after they don't vote in the next two federal elections. But it's a really complicated process.”

Really? Why is this complicated? Do they think that someone will come back to life after six or seven years and start voting again?

And yes, that is being taken advantage of in some places. 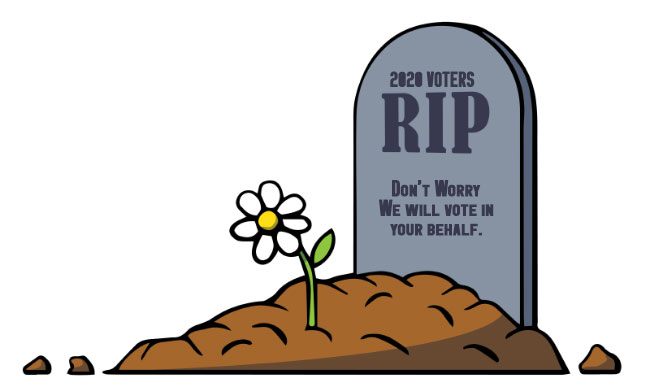 The poll answers are greatly reflective of who you ask.

Rewind a few years. On October 20, 2016, the Arizona Republic/AZCentral.com proudly trumpeted the headline, "Poll: Clinton up 5 points over Trump in Arizona". 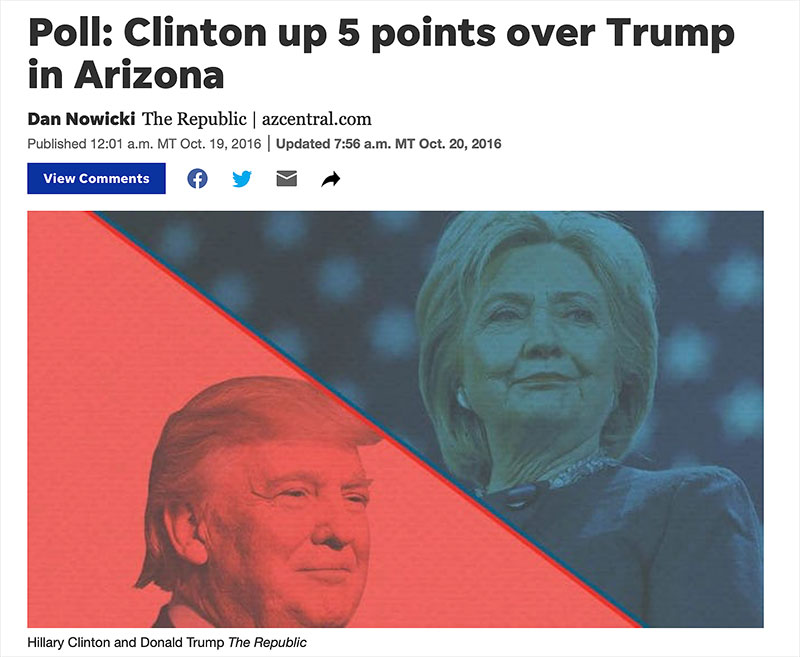 It seemed a bit shocking on the face of it, but AZCentral doubled down, "Hillary Clinton is hanging on to a small but widening lead over Donald Trump in what remains an up-for-grabs race for Arizona's 11 electoral votes, according to a new Arizona Republic/Morrison/Cronkite News poll released Wednesday.”

However, with a closer examination of the October, 2016 poll, it was a surprise that Hillary wasn’t up by double digits, after considering who they asked. The Hillary camp should have been very worried about Arizona when looking at the results of that poll.

Arizona has a higher registration of Republicans than Democrats, and that’s been true for many years. But, in this poll, they questioned almost twice as many Democrats as Republicans. They spoke with more Independents than Republicans.

Their polling sample included a majority of the respondents in Maricopa and Pima Counties - which are much more likely to skew Democrat than Republican.

In contrast, a 2020 poll of Arizona voters done by the Trafalgar Group, took their poll samples from Congressional Districts, correlating to the percentage of votes each district had in previous elections. 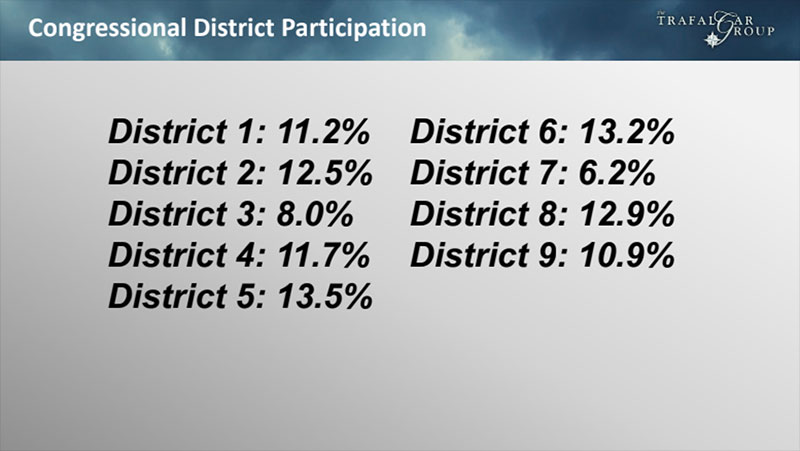 You can see how it compares here: 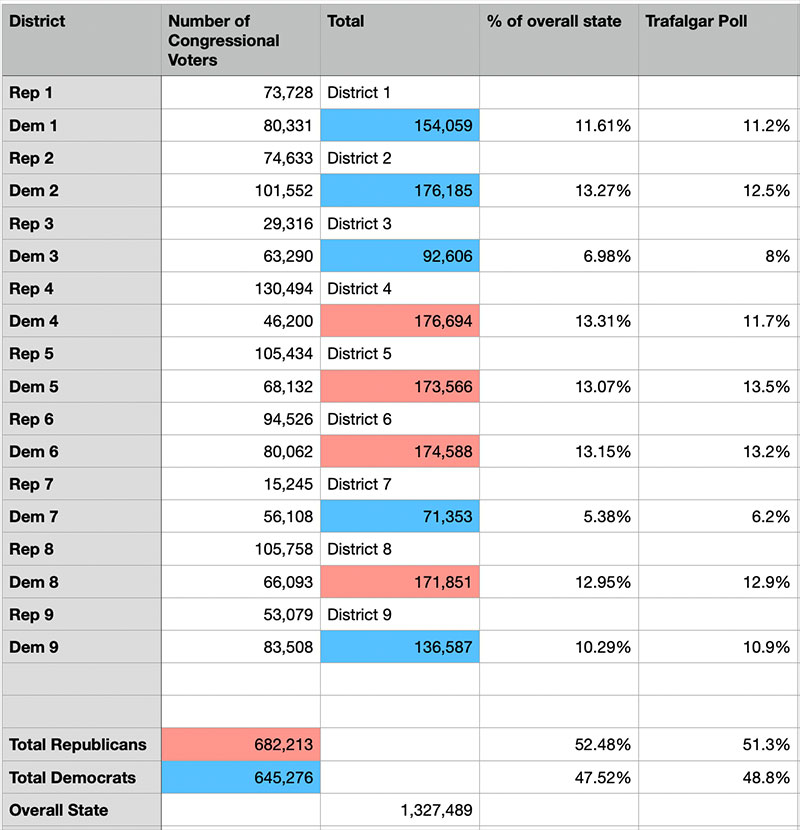 Media is perceived to be highly biased towards the Democrats. They tell you what they want you to hear. That hasn’t changed in four years.

There’s a saying: The more things change, the more they stay the same.

On August 10, 2016, the Arizona Republic/AZCentral.com was pretty cocky, publishing a cartoon by Steve Benson on the election. 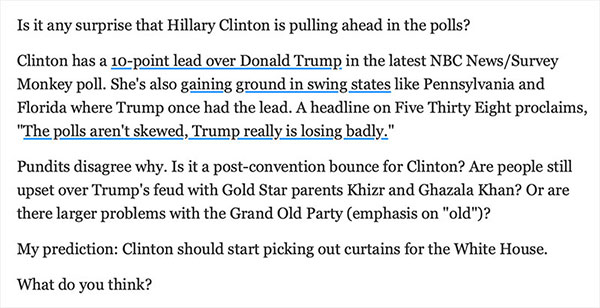 There is a phenomenon called the “Shy Trump Voter”. But wait! There’s more!

These days, we are able to easily identify whether or not we recognize phone numbers. Pew Research writes:

"While evidence suggests that well-funded, telephone-based surveys still work, they have become much more difficult and expensive to conduct. Difficult because the swarm of robocalls Americans now receive, along with the development of call blocking technologies, means that lots of people don’t answer calls from unknown numbers. Response rates have gone from 36% in 1997 to 6% today."

Some people that don't respond are termed, “The Shy Trump Voter,” spoken of by pollsters for months now. But, not being spoken of is the: 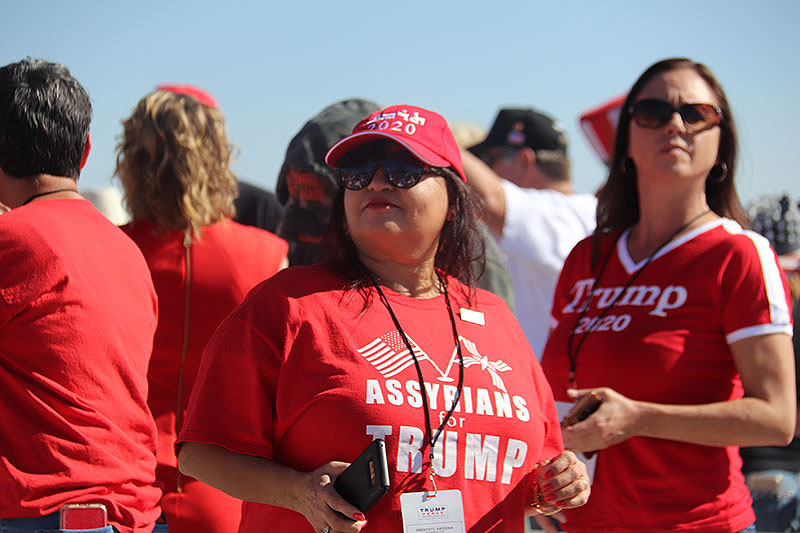 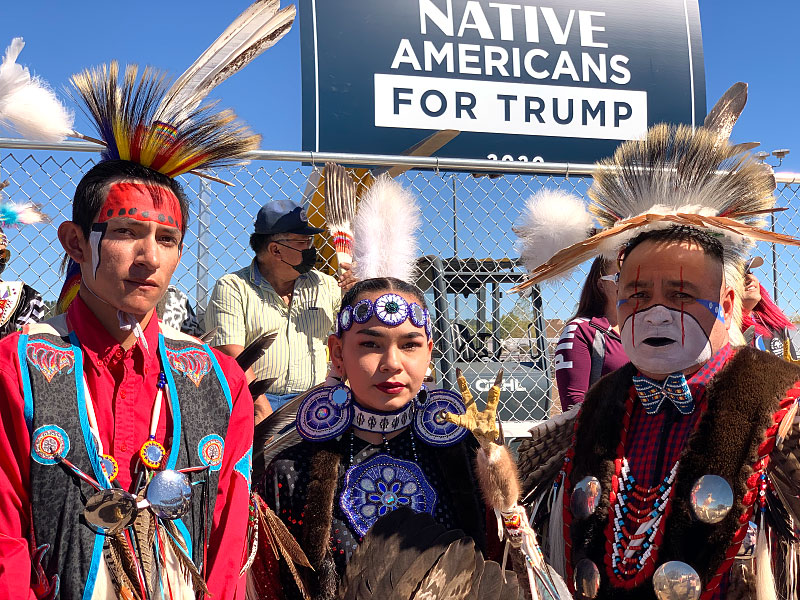 This photo was taken at a recent Donald Trump Jr. Rally in Williams, Arizona.

If you missed the #WalkAway #UNSILENT Majority March on Washington, you really missed out. It was an AMAZING day with thousands of people coming out to stick it to @TheDemocrats. Here's my speech from the event. —">https://t.co/YgTU08EdxD

I served under Clinton, Bush, and Obama. President Trump has done more for the military than any president I worked for. New equipment, better training, VA Choice and VA Accountability. Veterans love President Trump!

It's a legitimate question to ask, "Are these voters being reached in the polls?"

Visual 'polls' - Things seen on social media, the news, on our streets?

Biden's rally vs Trump's rally
...and the poll shows Biden is leading by 10 points?
The poll is a fool! https://t.co/TjHfJkOWtB pic.twitter.com/3yC5JLWDWo

CRANK UP THE VOLUME!! @realDonaldTrump pic.twitter.com/roQbuEWcPq

So, to wrap it all up, here is Robert Cahaly with the Trafalgar Group explaining their approach:

Perhaps you have your own ideas by now. That’s a good thing. Check out 538, where you can create your own scenario - but just be warned - this website is sponsored by ABC News: