Journal of Prevarication: How the Banjo Won the West Featured 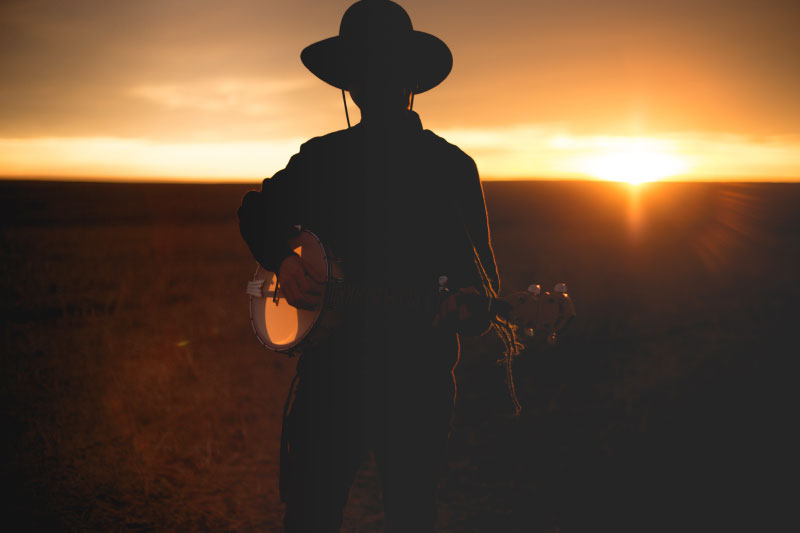 A guitar is a fragile instrument. Banjos are more durable.

Lewis and Clark carried tenor banjos on their grand expedition.

You thought cowboys played guitars? Not many of them. Not on the job, anyway, despite what all those old B movies taught you.

A guitar is a fragile instrument. Banjos, like the short-necked Irish tenor I play, are more durable. They are also easier to come by.

One night, after a concert at the Peoria Library, a bunch of us went out to coffee at Denny’s. Miss Ellie thought I should not leave my historic tenor banjo on the back seat of the car.

It was, after all, the banjo that Shaggy Beanstrom was playing on that terrible night near Thistle City, early in the 1900s.

But I told her, “Peoria is my home town. No one will mess with it. Trust me.”

However, when we came out of the restaurant, someone had broken the window out of my car and left two more banjos.

I started to spread the story of banjo supremacy as a recreational lie several years ago, because I was fed up with the lack of respect shown banjo players. Even accordion players make fun of us. Then I found out that my claims for the banjo were mostly true.

Guitar pickers don’t argue with me. They know that despite those movies, a guitar would be a handful of splinters after a hard day’s ride. A fiddle, while more compact, is also a delicate work of art. My version of history really does not sit well with harmonica players, though.

Lewis and Clark carried tenor banjos on their grand expedition. They knew that you can use a banjo to paddle a canoe, or you can turn it over and pan gold with it.

In the last hours before the Alamo fell, Davey Crockett tried to cheer up the Texans therein by playing patriotic music on his banjo.

Geronimo learned in captivity to play the tenor banjo. The real reason for the Gunfight at the O.K. Corral was because someone criticized the way Virgil Earp played his tenor banjo.

When Virgil left town, he gave his banjo to a working woman named Bashful Bertha. Bertha gave the instrument to a traveling man, who lost it to a cowboy named Shaggy Beanstrom in a poker game. That’s how Shaggy came to have his banjo with him on that historic night when he bought a ticket to hell.

Shaggy was a cowhand on one of the last big cattle roundups in Arizona, the closest thing you could find to a Texas-style cattle drive in the early days of the 20th Century.

Ranchers had thrown in together and rounded up all the critters they could find over a wide area of eastern Arizona. The herd numbered more than three thousand head, being held in a swale south of Holbrook, not far from Thistle City. Their owners would sort them out and ship some from the railhead at Holbrook.

You never heard of Thistle City? You will soon see why there is not a trace left of that pioneer Mormon community.

Shaggy Beanstrom was one of the night guards on that fateful night, riding near the eastern edge of the herd. A thunderstorm was building. There was electricity in the air, and tension in the herd. The critters seemed to be waiting for something to happen.

Shaggy had brought his short-necked tenor banjo with him, tied onto the back of his saddle. He figured to work some on “Waiting For The Robert E. Lee” during the long, lonely night.

Shaggy was about two posts short of a fence, and it now occured to him that playing his banjo might soothe the restless cattle.

Shaggy began to strum “Marching Through Georgia,” using a large tortoise-shell pick. He hadn’t been strumming long, and he struck two sour chords in a row. Cattle bawled.

The herd began to move, swirling about at first, then finding a direction along the low ground that lead toward Thistle City. Panicked cattle ran faster and faster. Twelve thousand hooves pounded the earth. The vibrations knocked bottles of hooch off the back bar at the Bucket Of Blood Saloon in Holbrook, twelve miles distant.

Residents of Thistle City had invested blood and sweat in their town of tents and board shacks and corrals. They barely had time to run for a nearby ridge before the herd was upon their fair community.

In seconds, Thistle City was leveled. Shaggy was thrown from his horse onto the back of a running mother cow. He straddled her for several yards before he bailed off, still clutching his banjo.

Harmonica players who have studied history swear that banjos caused more stampedes than did thunderstorms, and it’s a darned good thing that few cowboys carried accordions. But I think the Thistle City stampede was a fluke, caused by Shaggy’s lack of experience. It wasn’t the banjo’s fault.

Just before they hanged Shaggy from the limb of a cottonwood tree, he handed his short-necked banjo to an older, wiser cowboy named Ezekiel Lockjaw. Zeke had had a brief fling as a bandsman in a music hall in Kansas City, and he knew a thing or two about banjos.

Zeke was grateful for the bequest. He thought of his friend Shaggy every time he played.

Fifteen years later, Zeke was night-guarding a much smaller herd of cattle where Thistle City used to be. The cattle were restless. The air was still and electric; a storm was building.

“Deja moo,” Zeke thought to himself, since there was no one else to think to. Suddenly, the herd swirled about and began to break for the low ground.

Zeke started picking out a sweet melody on the banjo–“Green Grow The Lilacs,” a sad, soothing tune. It is not generally acknowledged by other musicians, but a tenor banjo in the right hands can sound like a harp from Heaven.

The cattle had not even reached stampede speed when they heard the music. They slowed, stopped, looked around, and began grazing on the sparse grass. One young cow followed Zeke back to his bedroll by the chuckwagon, and became a real pest.

Just before he died, Zeke Lockjaw gave me that short-necked banjo. I promised him I would carry on, and I play it today, proudly if not well.

I admit that guitars sound better, and I wish I knew how to play one. (Truthfully, I wish I could play the piano, but that ain’t the cowboy way.)

I gladly put up with abuse from guitar pickers, because there’s not a Martin or a Gibson out there that has such a checkered history as my little stampede banjo.