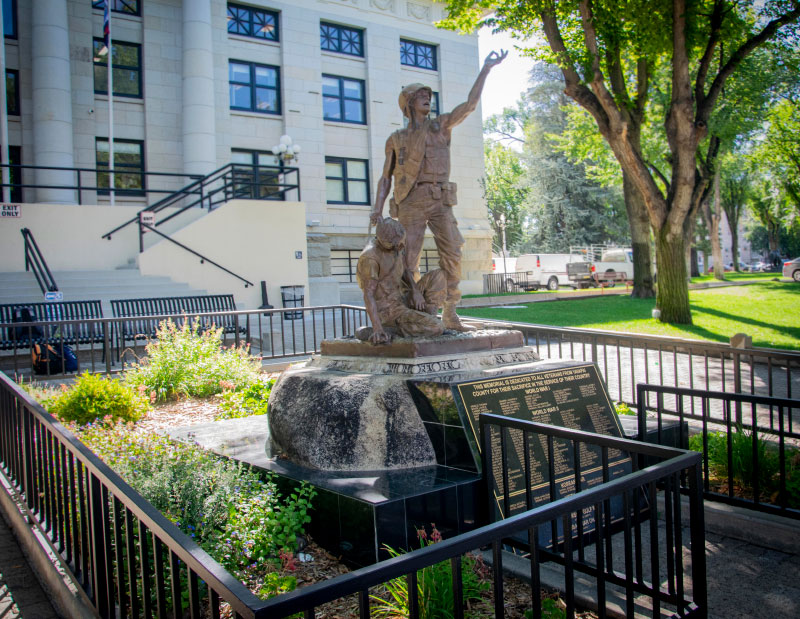 The memorial will be rededicated with a new plaque...

A rededication will take place on Tuesday, September 28th

In 1984 discussions began with various veterans’ groups to develop an All-Veterans Memorial for Yavapai County. It wasn’t until April of 1989 that the statue designed and created by Neil Logan was complete, and ready to be dedicated by the Yavapai Vietnam Veterans Association. The statue depicts a standing U.S. Marine stretching his left arm to the sky as he holds up a wounded Marine kneeling at his side. In 2006 the Sunup Rotary Club rededicated and began annual maintenance for the monument and its surroundings.

Over the past 32 years there have been updates and rededications to the memorial as additional Yavapai County residents made the ultimate sacrifice for this Country. This coming Tuesday, September 28, 2021, Yavapai County will join with the Sunup Rotary and once again rededicate the memorial with a new plaque. The event will begin at 2:00 PM at the memorial on the west side of the Courthouse plaza. Everyone is welcome and encouraged to attend.

Sunup Rotary’s John Stewart will provide additional remakes along with Mayor-Elect Phil Goode. Closing remarks will be made by Tony Shaw. Neil Logan will also be in attendance.