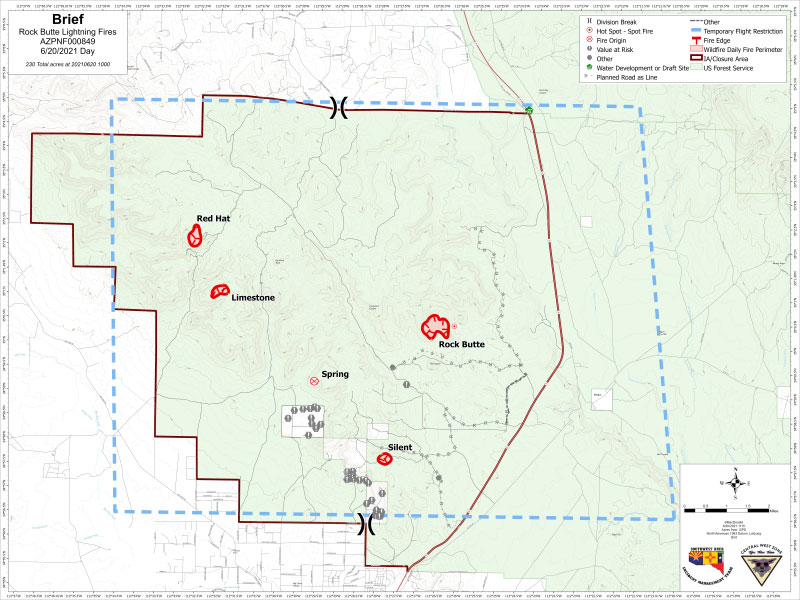 Fires are blazing north of Paulden and Perkinsville

The six fires being managed by the Arizona Central West Zone Type 3 Incident Management team are the following [from north to south - all acreages are approximate and current as of 6/20, 2000]:

Location: North of Paulden, AZ and west of HWY 89

Location: 4 miles North of Perkinsville, AZ and east of HWY 89 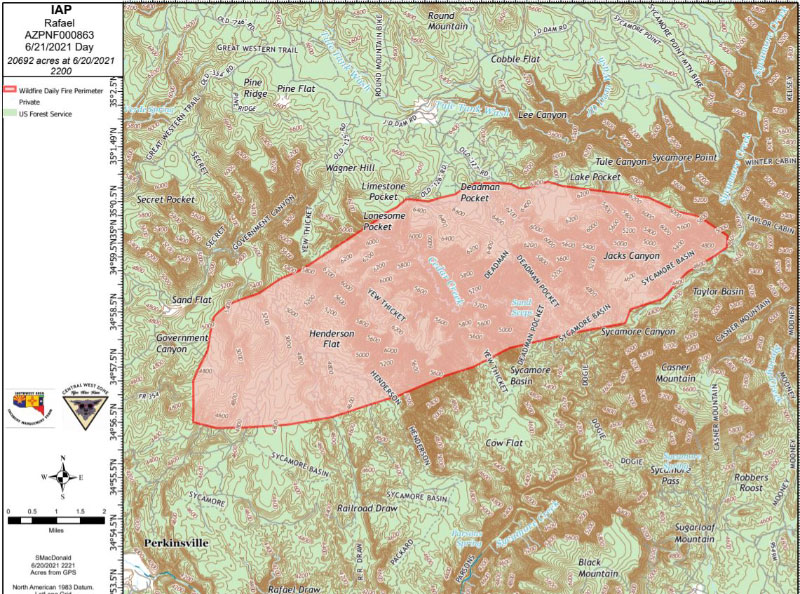 Prescott, Ariz. [June 21, 2021] – Firefighters were challenged by high winds and continued dry conditions throughout the day yesterday.  The Spring Fire, part of the Rock Butte Fires, was driven by winds and expanded to over 400 acres. Today fire crews will be working on developing future fire tactical options. The other four smaller fires under the Rock Butte Fires showed minimal to no new changes and will have crews on the ground through the day yesterday.

The Rafael Fire which started as 4 small fires after last week’s lightning storm, east of Highway 89 and north of Perkinsville, became one large fire after yesterday’s winds and extreme conditions. The Rafael Fire grew from 400 acres to over 18,000 acres yesterday afternoon engulfing the other adjacent smaller fires. The Rafael Fire now involves the Prescott, Kaibab, and Coconino National Forests and spans the Yavapai/Coconino County line.

Due to the complexity of the Rafael Fire, a Type 1 team has been ordered and will arrive later this week to take over management of the Rafael Fire. Meanwhile the Arizona Central West Zone Team will continue to work with all entities on these fires. The current Incident Management Team is also in contact and coordination with emergency management personnel from both Yavapai and Coconino counties.

WEATHER: Hot very dry conditions through Monday with temperatures peaking in the afternoons around 100 and overnight to early morning temps in the 60’s, relative humidity is about 9%, winds out of the southwest at 10-15 MPH with gusting up to 25-30 mph. There is a 0% chance for precipitation to occur in the area.

CLOSURES: There is currently a closure order for the area surrounding the Rock Butte Fires west of Highway 89. Fire managers are working on developing a closure area for the Rafael Fire Area.

FIRE RESTRICTIONS: Stage 2 Fire Restrictions are in effect on the Prescott, Kaibab and Coconino NFs, and around Arizona, visit: WildlandFire.az.gov/fire-restrictions