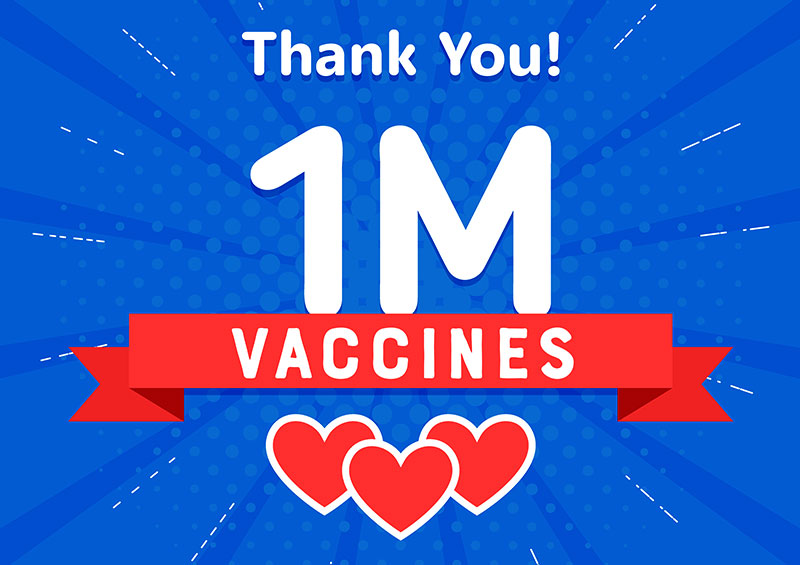 “We’ve reached a major milestone with our one millionth dose,” said Governor Ducey. “The dedication and hard work of many made this accomplishment possible. Nurses, doctors, health technicians, support staff, volunteers — to each and every one of you, thank you. ”

“But there’s more work to be done,” Governor Ducey added. “Arizonans are eager to get the vaccine, and we’re committed to distributing it safely and efficiently. We will continue to work with our private and public partners to quickly distribute the vaccine, and with the federal government to secure the doses we need to protect Arizona.”

Due to the large number of vaccines administered every day by the state, Arizona’s 15 counties and private health care providers, the one millionth person to receive the vaccine cannot be determined. Latest numbers from the Arizona Department of Health Services (ADHS) show Arizona has administered 996,699 doses, and the one millionth dose will be administered today based on the reported number of Arizonans vaccinated each day.

ADHS Director Dr. Cara Christ said that administering a million doses of the vaccine in less than two months is a testament to the private public partnerships that have come together in our fight against COVID-19.

“At the Arizona Department of Health Services, we’re working to administer the vaccine quickly,” said Dr. Christ. “We are thrilled to reach one million doses administered, and we will continue to get Arizonans vaccinated so we can protect our vulnerable populations. Thank you to all of our partners who are working tirelessly to get the vaccine into Arizonans’ arms.”

On December 14, Arizona received its first shipment of COVID-19 vaccine doses. That same week, distribution of the vaccine began in the state’s largest population centers, Maricopa and Pima Counties.

On December 30, Governor Ducey issued an Executive Order to rapidly expand access to the COVID-19 vaccine by streamlining distribution throughout Arizona and establishing additional vaccination sites.

On January 11, Arizona opened a state-run vaccination site at the State Farm Stadium that operates 24/7. The site has administered 186,489 since opening. Additionally, President Biden and Vice President Harris praised the work being done at the site during a virtual tour earlier this week. On February 1, the state opened another site at Phoenix Municipal Stadium. The site has administered 17,572 to date.

On January 26, the Governor issued an Executive Order to accelerate the statewide distribution of the COVID-19 vaccine and move doses of vaccine to where they can be rapidly administered to Arizonans.

Today, Governor Ducey and ADHS announced a partnership with the University of Arizona and the Pima County Health Department to operate a state vaccination site on the university’s mall area on central Tucson campus.