Republican Party of Arizona Recognized as the 'Most Engaged' Featured 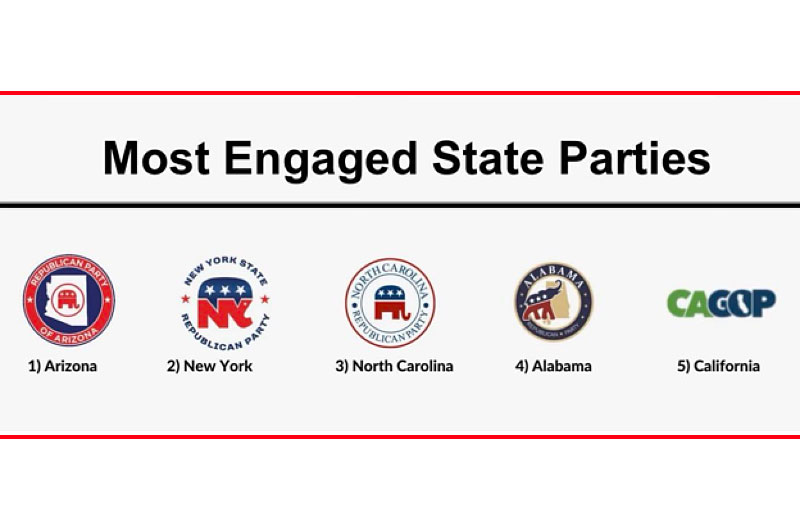 The Republican National Committee (RNC) recognizes the Republican Party of Arizona (RPAZ) as the “Most Engaged State Party” in the country.

Topping the national list at Number 1 is the RPAZ.

The Republican Party of Arizona (RPAZ) is recognized as the "Most Engaged State Party" by the Republican National Committee (RNC). Recently, the RNC announced the top five most engaged state parties in the country. Topping the list at Number 1 is the RPAZ.

Over the course of the past few months, the Republican Party of Arizona has been assembling a tier-one communications team with staff dedicated to advancing and elevating our shared goals. The RPAZ has been actively recruiting new precinct committeemen at record rates, brought on a record number of volunteers and candidates, and has shattered all records for fundraising across every platform. As a strong, independent State Party, the RPAZ is a force to be reckoned with as we fight for our Republican values on every front. Want to join the fight? Donate here!

In addition to these efforts, we continue to train candidates at all levels - all the way to school board. We produce daily video updates with the Chairwoman and Executive Board members via social media & email, and we've sustained an active schedule of major media appearances with Chairwoman Dr. Kelli Ward. We produce the go-to statewide newsletter in Arizona, advance our ideals in the public square via social media and op-eds, and so much more. Grassroots party activists and the general public in Arizona are being kept informed, engaged, and activated through the skilled execution of our communications strategy.

As we continue to lay the groundwork for victory in 2022, we ask that you support us as we support Republican efforts in Arizona and around the country. Together, we will defeat the nakedly, America Last Democrat Party and defend our state and Nation from their failed policies for generations to come.