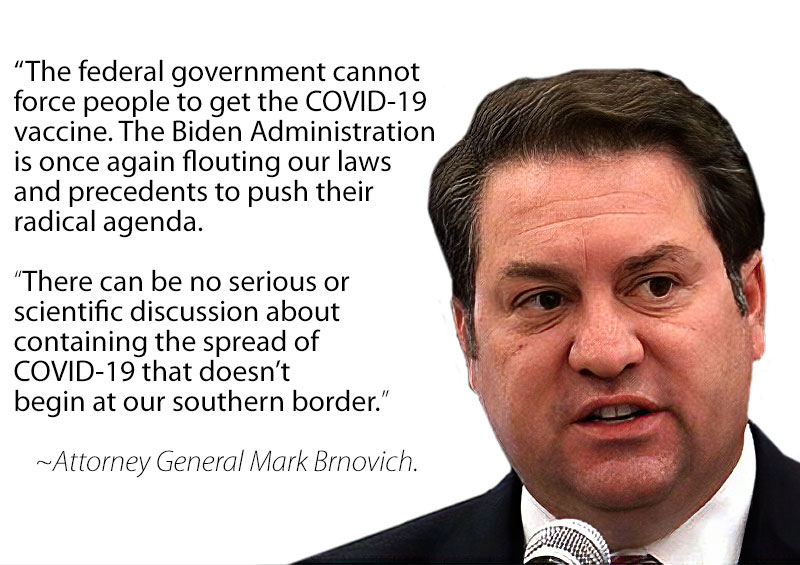 First state lawsuit in US filed against federal vaccine mandate

PHOENIX – Attorney General Mark Brnovich announced his office (AGO) is suing President Biden and other officials in his administration over their unconstitutional COVID-19 vaccine mandate for federal employees, federal contractors, and private businesses with more than 100 employees. This is the first lawsuit in the country to be filed against the Biden Administration’s radical actions requiring COVID-19 vaccines.

I promised Arizonans that we would not stand for the Biden Administration's egregious federal overreach on vaccine mandates.

Today, we have filed the first lawsuit in the nation against the unconstitutional mandates. Arizona will not tolerate this assault on our sovereignty. pic.twitter.com/1eHAUX8GYs

“The federal government cannot force people to get the COVID-19 vaccine. The Biden Administration is once again flouting our laws and precedents to push their radical agenda,” said Attorney General Mark Brnovich. “There can be no serious or scientific discussion about containing the spread of COVID-19 that doesn’t begin at our southern border.”

President Biden will soon require a majority of private businesses, federal employees, federal contractors, and virtually all healthcare providers to receive the COVID-19 vaccine or lose their jobs. However, migrants who cross the southern border illegally are not subject to any vaccination requirements even when released directly into the United States (where most will remain). This reflects an unmistakable—and unconstitutional—brand of favoritism in favor of illegal migrants.

In his brief, General Brnovich argues that the Biden Administration’s COVID-19 vaccine mandate is one of the greatest infringements upon individual liberties, principles of federalism, and separation of powers ever attempted by an American President.

“Under our Constitution, the President is not a king who can exercise this sort of unbridled power unilaterally. And even George III wouldn’t have dreamed that he could enact such sweeping policies by royal decree alone.”

The AGO argues Biden’s vaccine mandate violates the Equal Protection Clause by favoring migrants that have crossed into the country illegally over legal U.S. citizens. The Biden Administration allows migrants to decline the vaccine, protecting their freedom and bodily autonomy more than American citizens.

Even President Biden’s own Chief of Staff Ronald Klain acknowledged the federal government lacks the legal authority to impose a COVID-19 mandate but is doing so anyway with this “ultimate work-around.” 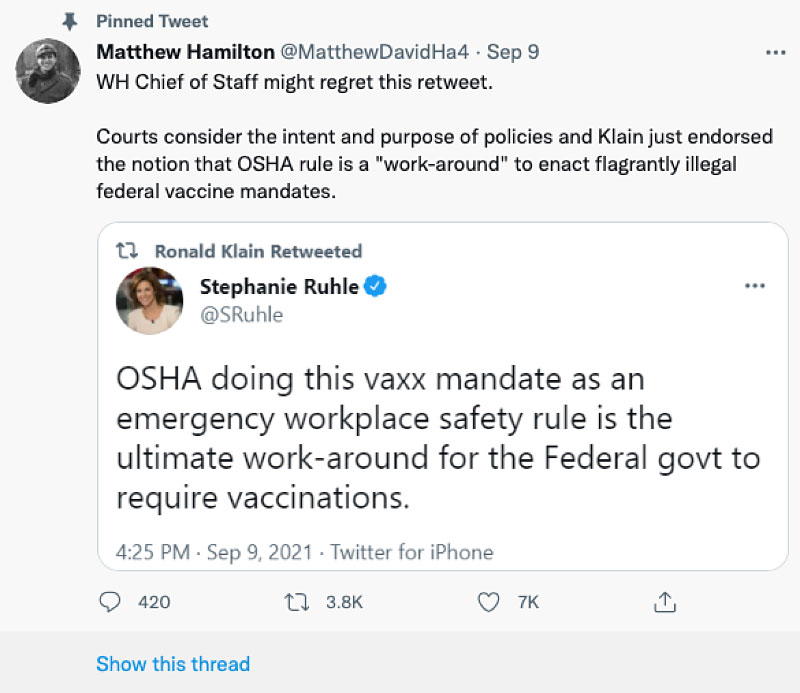 The AGO is asking the District Court of Arizona to declare the Biden Administration’s vaccine and testing policies unconstitutional and return the power of healthcare decisions back to citizens where it belongs.

This is exactly what is needed. Thank you @GeneralBrnovich for this important civil rights suit. I repeat: medical care requires informed consent. Forcing medical procedures is neither consensual nor informed. The unequal application of this law is patently unconstitutional https://t.co/YjkmsnyBiX