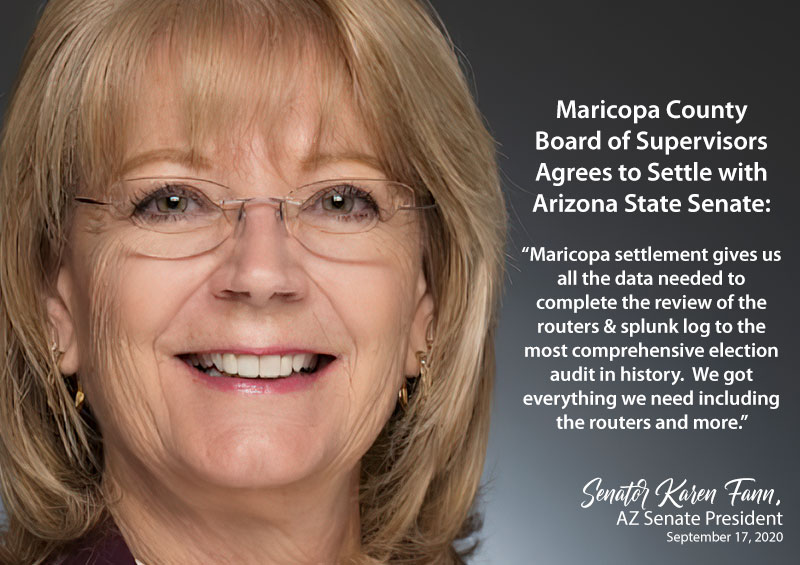 Settlement between Maricopa County and AZ Senate will help to answer some, but not all, questions.

The Arizona Senate will receive answers to many of their questions through a 3rd party Special Master, John Shadegg.

While the Maricopa County Board of Supervisors attempt to put a positive spin on their agreement with the Arizona State Senate, it certainly appears that Maricopa gave up a lot more than they received.

Of course, by coming to the table and working out a bargain, they won’t have state revenues of over $470 million withheld by the Attorney General’s office for violation of a subpoena, which is definitely a plus on their side.

Basically, this agreement (see the end of the article for the entire agreement) allows for:

1. A Special Master – John Shadegg, attorney and former US Congressman – to coordinate the process of getting answers to the questions the Senate has concerning the County’s routers and splunk logs relating to the November 3, 2020 election. Shadegg will hire between one to three computer technology experts to assist him in responding to the Senate’s questions. Shadegg will have the sole responsibility to hire his expert team. The time period looked at will be from October 7-November 20, 2020.

2. The County agrees to waive and release it’s claim against the AZ Senate for the County’s replacement of it’s election equipment, which cost nearly $3 million.

3. The County agrees to produce digital images of ballot envelopes.

4. The County will pay for the Special Master, his expert team and expenses.

5. The Senate agrees, upon execution of the Agreement, that President Fann will send the Arizona Attorney General notification that the County has complied with the Senate’s outstanding subpoenas.

On Twitter, some are trying to say that the AZ Senate doesn’t get the routers. Senate President Karen Fann disagrees.

The back and forth on Twitter is getting a bit snarky. In response to a Jeremy Duda post on Facebook in which he questioned whether the Senate gets the routers, Senate President Karen Fann replied firmly, “We get the routers.”

The Maricopa County tweet in response was worthy of a middle schooler:

To sum up the County's position: Repeating "routers" over and over again a la Beetlejuice isn't going to magically summon them. Protecting sensitive citizen & law enforcement data has always been a top priority. Giving Cyber Ninjas a roadmap to our network was never an option. pic.twitter.com/Y15yYpGdI3

Then former Maricopa County Recorder Adrian Fontes (a Democrat, who was voted out of office in 2020, and is now running for for Arizona Secretary of State) also jumped in:

You “get” the routers just like you “hired auditors”.
My kids are also into fan fiction.

HUGE win for the Az Senate today! Maricopa settlement gives us all the data needed to complete the review of the routers & splunk log to the most comprehensive election audit in history. We got everything we need and more. Maricopa County goes home with its tail between its legs 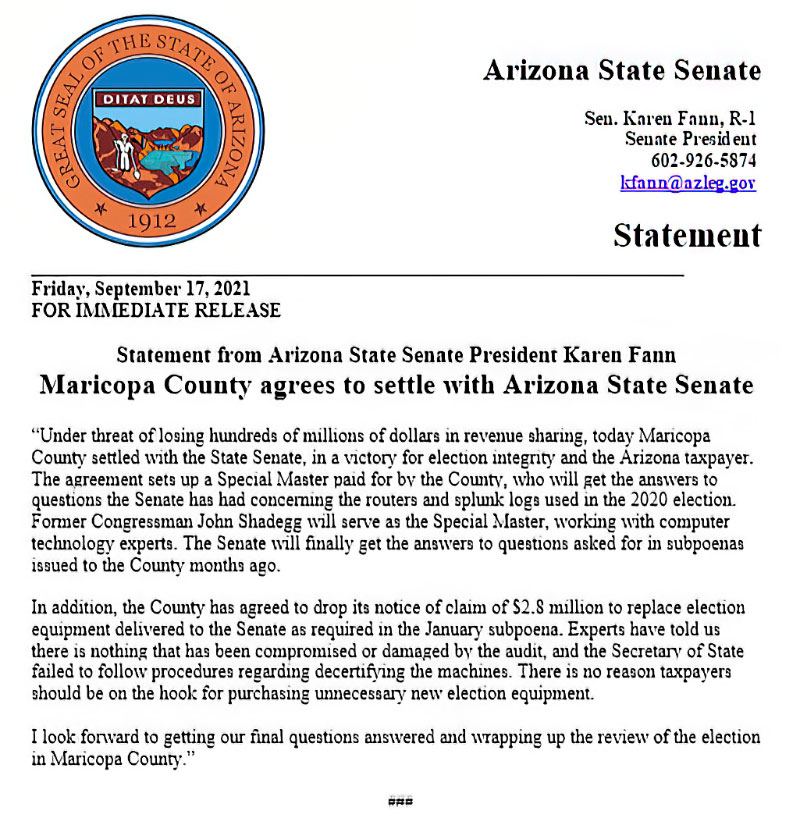 Maricopa County Supervisors posted, "At all times, the routers will remain in production and in the custody of Maricopa County.  The agreement is structured in a way that ensures no personal identifying information or sensitive law enforcement or court-related information is revealed."

“This agreement is a step in the right direction to putting this nonsense behind us," said Maricopa County Supervisor Chairman Jack Sellers, District 1.  "The Cyber Ninjas will never be able to touch the routers or access our data.”

Well, maybe the Cyber Ninjas will not be able to directly touch the routers or access data, but Maricopa County has agreed to have up to three technology experts, working under the direction of the Special Master for this procedure, find the answers to Cyber Ninjas’ questions.

There are many questions to answer, indeed.

Let’s look back to the July 15th update from the Election Audit professionals, speaking to Senate President Karen Fann and Senator Warren Petersen.

Ben Cotton is part of the Arizona Election team. He is a court-recognized witness in digital forensics and incident response. He has over 25 years experience in this field, working for the US Government, law firms and Fortune 500 companies.

After detailing the equipment they did receive from Maricopa County, Cotton explained that they created digital copies of all the digital devices that were handed over. Then they conducted a keyword search looking for Internet connections, and anomalous or unauthorized connections into the system. They searched for malware and conducted live memory analysis on virtual systems.

"The last time the antivirus was updated on these systems was the date that the Dominion software was installed on the systems. That happens to be August of 2019," Cotton said. "There have been no operating system updates or patches on this system since that same date."

"What that creates is a tremendous vulnerability to anyone who could get access through a system..."

According to Cotton, they need to see the routers in order to, “…substantiate some findings that we are seeing through the keyword searching…”

In other words, it appears that Cotton and his team believe that Internet connections, anomalous or unauthorized connections may have been made into the Election Management System (EMS). The information on the routers will help to confirm or debunk those findings. 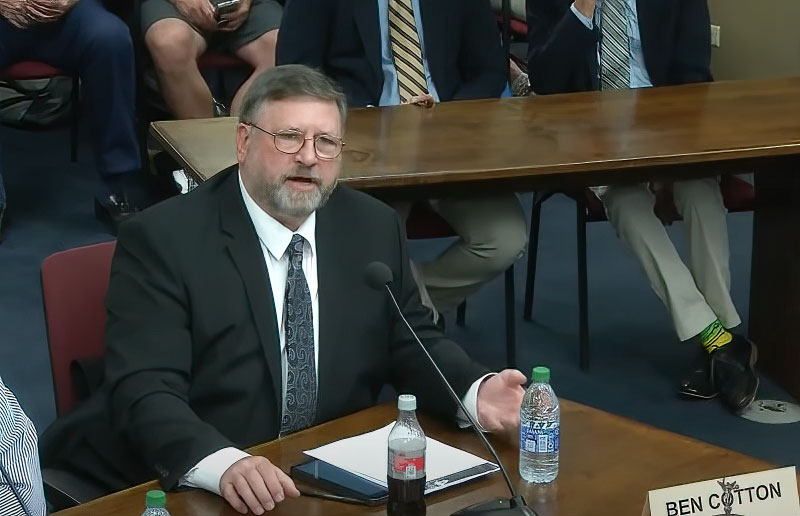 Ben Cotton testifying at the Senate Hearing on the Arizona Election Audit.

Maricopa County's refusal to hand the routers over, or even to allow virtual access, is based on a claim that this could compromise law enforcement operations and other County information.

On the face of it, this claim lacks credibility. Why in the world would law enforcement operations and citizen data be on the election router? Routers don’t typically store information. Cotton explained it like this:

"So, when you think about a router, think about someone delivering the mail to your mail box. That router is simply the mail carrier, ok?

"On a standard envelope that you might mail to your mother, you would put your return address, you’re going to put the address that it’s going to, and then you put that in the mailbox. The mail carrier looks at that, they know where to route that, and they will simply route that letter so it’s delivered in the mailbox of your mother.

"With a router, it’s very similar. For each packet of data that you have, you have an address to where it’s going to, you have an address of where it came from, so that any response can come right back to that system. But what you don’t have is the actual content, or the letter that’s contained in the envelope within the router itself."

Even if they examine the routers, auditors will not see drivers licenses, social security numbers or any sensitive information.

Senate President Fann asked, "“Why would they be using the same router as our election systems if there’s even a small remote possibility that they think that somebody could be jeopardized? Why are we sharing routers with other agencies?”

Cotton responded, "I can’t answer why they shared that space, but once again, this is one of those situations where what they’ve told the public is drastically different than the apparent reality in response to a legal subpoena. So from a public response standpoint, Maricopa County officials have repeatedly stated that the election system was a closed system, it did not touch the Internet, and therefore, it could not have commingled with the data from the sheriff’s department or the Maricopa County other office space. The fact that they have responded back to an official subpoena with the justification that to produce that data would compromise these other aspects of the Maricopa County network that does touch the Internet is an admission that maybe things aren’t like they’ve told the American public."

PHOENIX – Arizona Attorney General Mark Brnovich issued a statement today about the settlement reached between the Arizona Senate and the Maricopa County Board of Supervisors regarding the 2020 election audit.

"I have said from the beginning that the Senate has the right to conduct its audit. I am glad to see that because of my legal action, the Senate will obtain the information it needs to complete its audit. Arizonans deserve no less," said Arizona Attorney General Mark Brnovich.

Last month, Attorney General Brnovich determined that the Maricopa County Board of Supervisors was in violation of state law for failing to comply with the Arizona Senate’s legislative subpoena related to the 2020 election audit. More information can be found here.