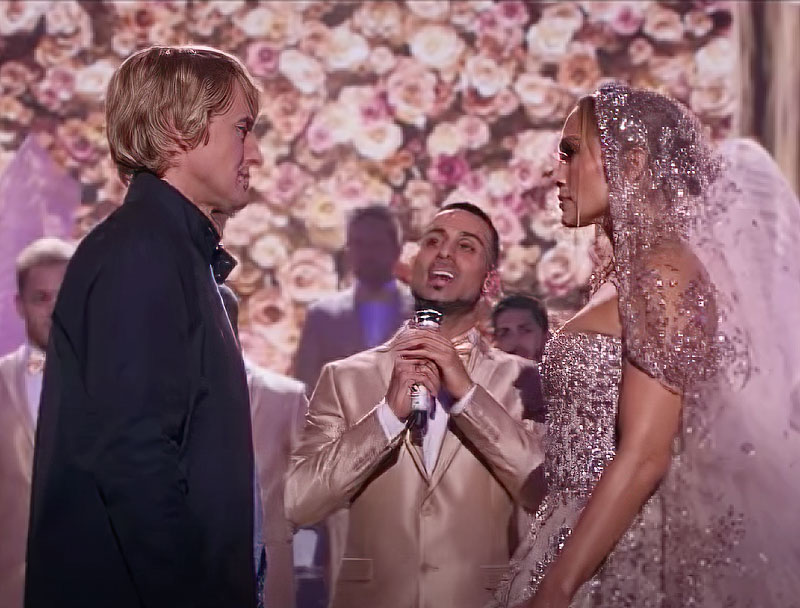 Is it good enough to bother with? Oh, yes.

The Romantic Comedy is back in full flower if it had ever departed. Sometimes the genre just hibernates for a while to awake and tease and delight us. Or at least to help us pass a couple of hours in a pleasant way.

In “Marry Me” we have a glamorous show business mega-star matched with an ordinary guy, a nice fellow to be sure but not a man of wealth, power, or world-class status. The actors are Jennifer Lopez, who naturally and without a pause, plays the hugely successful show biz star. Well, with a net worth of $400 million, she actually is a show business megastar. Owen Wilson, a star in his own right, plays Owen Wilson to a T, the low-key, kindly every-man that we have seen in many of his films.

Sarah Silverman and John Bradley (“Game of Thrones) back up the main players. In a bizarre and unbelievable plot, J Lo is about to marry her lover (handsome Colombian singer/actor Maluma) on stage as the highlight of a concert. Wilson is there with his teenage daughter when the headliner discovers that her intended is a cheater, in fact, cheating with her assistant.

So, with the magic of the romantic comedy, she plucks out the dad from the crowd and weds him on stage instead. If this sounds weird, just think of Jennifer's actual love life. She has been married to or linked with two backup dancers, singer Marc Anthony, rapper P-Diddy Combs, baseball legend Alex Rodriguez and twice and currently with Ben Affleck, among others.  Anything can happen.

A trio of long-time professional TV writers ganged up to write the script. Also from the world of TV is director Kat Coiro who has made many many TV episodes. We should expect a smooth story, thick with sugary emotion and light on real life. It is exactly what we get, and what we want. In this time of diminishing plague, this is one of the few movies in the current release to make some money for the producers.

But is it good enough to bother with? Oh yes. We meet our true loves at nightclubs or baseball games, at friends' bar-bee-q or gas stations. There are too many humans to do it the old way, to grow up in a village with two or three possible mates in a generation, all of whom we have known since birth. Why not marry a stranger at a concert? Lopez is a world-class entertainer, we should see it just to watch and hear her sing. We really think, by the end, that she and Wilson could make a couple.

This film gets three and a half sawblades. It has a mild PG-13 rating and runs for one hour and fifty-five minutes. Your heart will tell your brain to shut up and root for love.