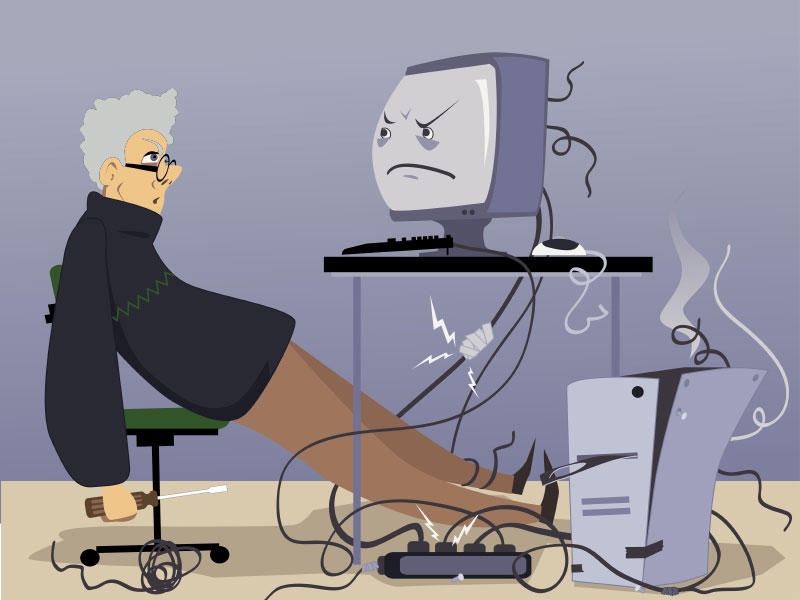 Sometimes technology can be the path to evil

Technology comes with snafus of its own.

My friend Bob has successfully installed a wireless mouse and keyboard for his new computer.

I’m awed by this, but I wish he had first checked with my other friend, Myron, who also went wireless. Myron’s wife Amy is threatening to divorce him, on grounds of technology.

Myron lives in Polymer Village, one of the retirement communities northwest of Phoenix, and he loves technology. But like me, Myron is not smart enough, or patient enough, to make all the gadgets work correctly–he’s wireless, cordless and clueless.

Life was harder when Bob and Myron and I were boys. Not everyone had telephones, and no one had TVs or computers. “Cordless” meant they hadn’t run the power lines to your farm yet.

Plastics were primitive, power tools were rare, and we had only about three kinds of adhesive at our disposal, including library paste. Cash registers were illiterate then, so sales tickets were written out by hand, and your purchase at the hardware store was wrapped with paper and string.

I love my power tools, electronic gadgets and some new ways of packaging. Easy access to photocopiers is real progress. I’m enthralled with new ways of gluing things, at the cost of sometimes gluing myself to myself.

However, some new packaging techniques are dangerous to geezers. While we’ve had years to get used to them, the materials and techniques have gotten tougher, and our strength is waning. I now have the upper body strength of a 95-year-old woman. I can cut open most bubble packs, but sometimes can’t separate the wrapping on a two-pack of soda crackers.

In my neighborhood, “hacking” means getting into bubble packs. At the Wickenburg Institute For Factual Diversity, we buy printer ink cartridges from Costco. They come two to a package, inside a plastic vault that Bonnie and Clyde couldn’t crack. The plastic is tougher than that used to make automobile bumpers. It takes me quite a while to cut away this time capsule, using an X-acto knife.

Myron fell prey to the wonderful transparent package wrapping tape now recommended by USPS, Fed Ex and the CIA. I’m skilled at using this stuff, but Myron hadn’t had much experience, and transparent tape is dangerous in the wrong hands–give it half a chance, and it sticks to itself, and any other nearby surface. One woman here in Wickenburg mailed her grandson to New Jersey because he got tangled in the wrapping tape.

One morning Myron’s wife, Amy, set out in the couple’s golf cart to go shopping. She had arranged for a commercial house cleaner, Emma Lou, to shampoo the carpets while she was gone. As Emma Lou was shampooing, Myron was in the kitchen wrapping a package to send to his brother Carl in Milwaukee, who had again left his bathrobe behind on his annual winter visit to Arizona.

Emma Lou is a pretty, nicely-constructed blonde who wears a pony tail. Wholesome, you know? On the job, she wears Reeboks, short black shorts and a white polo shirt with the logo of her cleaning company on the pocket.

Myron was watching Emma Lou’s cleaning techniques–isn’t it splendid how young people bend so gracefully?–when he captured himself in the wrapping tape. The more he fought it, the more he got wrapped up in his work.

Linda Cobb of Phoenix now has a national reputation as “the Queen of Clean.” In Polymer Village and the Sun Cities, Emma Lou is known as the “Guru of Goo.” She can make anything come unglued, and that apparently includes Myron’s marriage.

She decided that the quickest way to free Myron from the tape was to have him remove his clothes. I’m confident she had no other motive, because she is happily married to Russell, a tax accountant, and Myron is old enough to be her grandfather. Furthermore, being cognizant of vicious gossips, she left the front door of Myron’s house open to let the world know there was nothing clandestine going on. Like many good ideas, that turned out to be a bad idea.

Myron was standing there in his undershorts, and Emma Lou was holding his clothes, when a gossipy woman named Penny walked up to the door. Penny wanted to talk to Myron about the upcoming rummage sale and skateboard festival at the Presbyterian Church.

Penny looked in through the screen door, then quietly backed away. She had her cell phone with her–don’t you love technology?–and by the time she walked a block and a half to her house, six of her closest friends knew eactly what she had seen through Myron’s front door–no more, no less. Penny reports only the facts.

Not all of her friends are so conscientious. Considerable extrapolation occurred in the next few minutes, as Penny’s friends phoned other friends, many of whom knew Amy and Myron.

Meanwhile, Emma Lou finished her work and left Myron’s house. Myron put on golf shorts and went to his computer to report his misadventures to me and some other friends.

Apparently, the transmitter for Myron’s cordless keyboard contacted the electronic theft-prevention device that Myron had installed on the golf cart, and instructed it to shut the cart down. His wife Amy had left WalMart and was heading toward Bell Road when the cart stopped dead.

Amy does not share the love of gadgetry that Myron and I feel, especially when she’s stranded several blocks from home. She tried to call Myron on the cell phone. However, a female telemarketer with an intriguing voice had phoned to offer Myron a free weekend in a time-share at Sedona. Myron ignored the call-waiting signal, and strung the woman along.

While Amy was phoning around looking for a ride, she began to pick up clues that all was not well at her house. In a few minutes, her friends were cell-phoning HER, asking her to explain what Penny had seen.

Meanwhile, Emma Lou’s husband Russell had been hearing the same reports. Russell trusted his wife, and figured Myron must have come on to her in his undershorts. He hurried to Myron’s house, intent on gluing Myron to the wall.

On her way home, Emma Lou stopped by Russell’s office, and heard where he had gone. Uh-oh. She hurried after him. She found her husband loudly threatening Myron, who hadn’t a clue what this was all about. Emma Lou got Russell calmed down enough to explain why Penny had seen what she had so accurately reported.

After a few minutes of cooling down, the three of them had a good, if nervous, laugh.

That’s what Amy saw when she finally got home, after the taxi driver had gotten lost in Sun City Grand: Myron, Emma Lou and Russell sitting around the living room drinking iced tea and chuckling.

Amy went to the kitchen, found the package-wrapping tape, and began to mummify Myron’s head. Emma Lou and Russell excused themselves. Amy then went to the garage, got into her Mercury Marquis, and drove to her sister’s house in Mesa. From there, she called her lawyer. It took the guys at the golf cart shop 36 hours to figure out why the cart wouldn’t run.

Myron had them remove the anti-theft device, which was by then emitting broadcasts from a bootleg Spanish-language radio station, including reports on where the Border Patrol was lurking.

Myron resigned as chairman of the rummage sale and skateboard festival at the Presbyterian Church of Polymer Village. For the good of the church, he said. There’s talk of recalling him from the board of the Polymer Village Homeowners Association.

He’s left alone with his gadgets, and e-mail conversations with friends like me. We chat about celibate priests, cloning cats and how much easier life is now than when we were young.