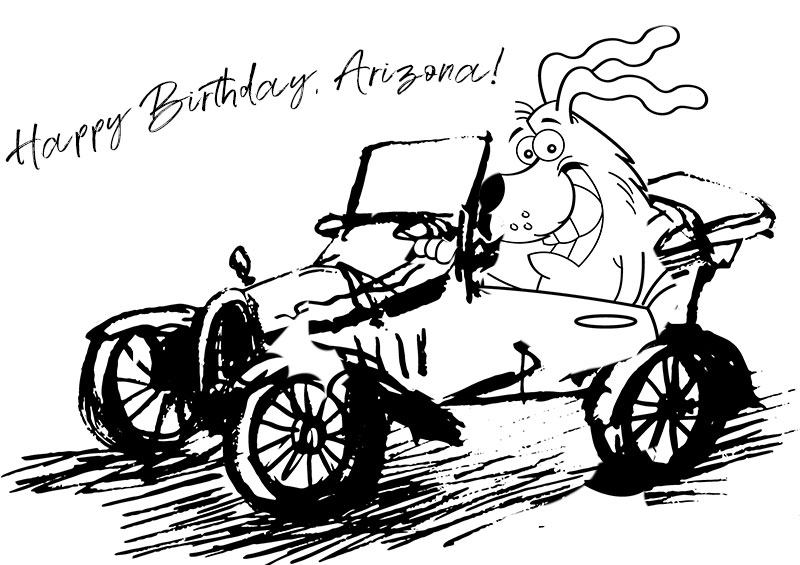 How romance overcame the odds on Statehood Day in 1912.

Editior’s note: This article was originally written by Jim Cook on February 9th, 2002. That means Valentine’s Day in 2021 is Arizona’s 109th birthday.

Valentine’s Day will be Arizona’s 90th birthday. On February 14, 1912, Arizona Territory became a state, the last of the lower 48 to be admitted to the Union.

Still, statehood is nowhere near as compelling as romance. On the day Arizona became a state, a young Phoenix man, Thomas, saved his fair maiden, thus winning her heart and hand. Some said Thomas was daring, and others called him reckless.

The battle for statehood had been long and difficult. Democrats in the U.S. Senate felt that Arizona had too many outlaws, too many range wars, too many Republicans. After 20 years, Arizona had won them over, and on that fateful morning, President William Howard Taft signed the bill that made Arizona the 48th state.

Word reached Arizona at 8:55 a.m., and the party was on. Steam whistles sounded. Horses bolted. People took to the streets in Phoenix, dancing and cheering. Brass bands marched. At 11:15, Governor-elect George W.P. Hunt left the Ford Hotel downtown and walked westward along Washington Street to the Capitol for his inauguration.

Thomas took the day off from his job in his father’s dry goods store, and went cruising in his new automobile. There were more than 1,200 “machines” in Arizona in 1912, but the horse and buggy were still dominant.

Unfortunately, Thomas had bought a Brush Runabout, the Ford Pinto of its day. The open-top roadster car was fleet, cheap and unstable. Some said Thomas also was unstable, but most figured he was just young and spirited.

The town’s lone motorcyle cop, Missouri Thompson, had recently stopped Thomas for letting his dog Jason drive the car up Central Avenue. Thomas explained that Jason, a big Laboratory retriever, was handy at setting the choke and throttle while Thomas cranked the Brush to start it. He thought the dog deserved to drive occasionally.

Missouri let the young man off with a severe lecture. He couldn’t figure out what kind of a ticket to write. Besides, Jason threatened the cop with bodily harm.

On this gala day, the only lump in Thomas’ oatmeal was his love life, a real heartbreaker. He was smitten with Laura, daughter of a prominent physician. His courtship had not lasted as long as Arizona’s quest for statehood, but it had been every bit as difficult.

Laura liked Thomas, too, but her father was strait-laced, and had decreed that the brash young man was not a proper suitor for his daughter. He had forbidden Laura to see Thomas. In fact, Thomas was banned from Laura’s home on North Central.

Thomas had bought Laura a box of chocolate, and a lacy valentine that expressed his adoration. However, he was perplexed about how to deliver it. He didn’t want to risk being expelled from Laura’s home again.

It occurred to him that the doctor, a Democrat, probably would drive his new Pope-Hartford car in the parade along Washington Street. Later, he would surely be at the inauguration of Governor Hunt. Laura probably wouldn’t be home either, but Thomas could leave the candy and valentine with the servants.

Thomas, with Jason at his side, drove around while he formulated his approach. Sure enough, he saw the doctor’s big automobile going down Central toward the heart of town. The doctor was wending his way past carriages, buggies, delivery wagons, and the Buicks and Kissel Kars of his peers.

As the doctor approached Van Buren Street, the careless driver of an ice delivery wagon veered and came perilously close to putting the first dents in the shiny Pope-Hartford. The doctor honked his horn indignantly.

That noise caused the horse pulling the ice wagon to rear up, paw the air and jerk the wagon sideways across two lanes. A woman, also driving south on Central, lost control of her Chalmers touring car. She went up onto the sidewalk, wiping out some begonias and scattering a brass band that was assembling there. The Chalmers bounced back into the street and across busy Van Buren. This caused the town’s horse-drawn paddy wagon to collide with a T-Model Ford, forcing the Ford into the rear of a lumber wagon. A keg of nails fell off the wagon onto the hood of the Ford, then burst on the pavement.

Unfortunately, Laura came along then, driving her buggy. She had delivered a girlfriend to the Capitol to help with the inauguration, and was returning home.

As she approached the tangled mess in the intersection, a cornet player blew derisively at the woman driving the Chalmers, making his horn sound like a whinnying horse. Laura’s mare bolted, running east on Van Buren, bound for New York.

Missouri Thompson, the traffic cop, saw the speeding buggy and gave chase on his motorcycle, whooping his siren. That noise did not calm Laura’s runaway mare, Fidget.

Thomas joined the chase. He set the hand throttle for about 35 miles per hour and told Jason to steer. The Brush quickly closed on the runaway buggy. Missouri glanced back and saw that crazy kid Thomas coming up with his dog driving the car. The policeman got off the street. His bike tore up three residential yards before he could stop.

Laura didn’t look reassured, either, seeing the Brush Runabout come alongside her with the dog at the wheel. As the car came abreast of the mare, Thomas jumped from the car to the horse’s back, grabbing for rein, mane and harness.

He pulled the horse’s head up and talked soothingly into her ear. By the time they got to 16th Street, Thomas had the mare in a mood to stop and listen to reason. Jason steered the Brush Runabout into a field and brought it to rest in an irrigation ditch.

Laura’s frightened father drove up and saw that his daughter was safe. He gave her a bear hug, a display of affection not common in those days. He shook Thomas’ hand, complimenting him for his bravery and presence of mind. As the doctor drove away to go to the inauguration, he didn’t say that Thomas could court his daughter, but he didn’t say he couldn’t , either.

After the commotion died down, Thomas gave Laura the candy and the fancy valentine. She squeezed his arm possessively, and said she would open them later, when she was alone.

Thomas and Laura lived happily ever after, now and then. Laura did insist that Jason not be allowed to drive the new Overland car that her father gave them for a wedding present.