Journal of Prevarication: It's an Ill Wind. Period. Featured 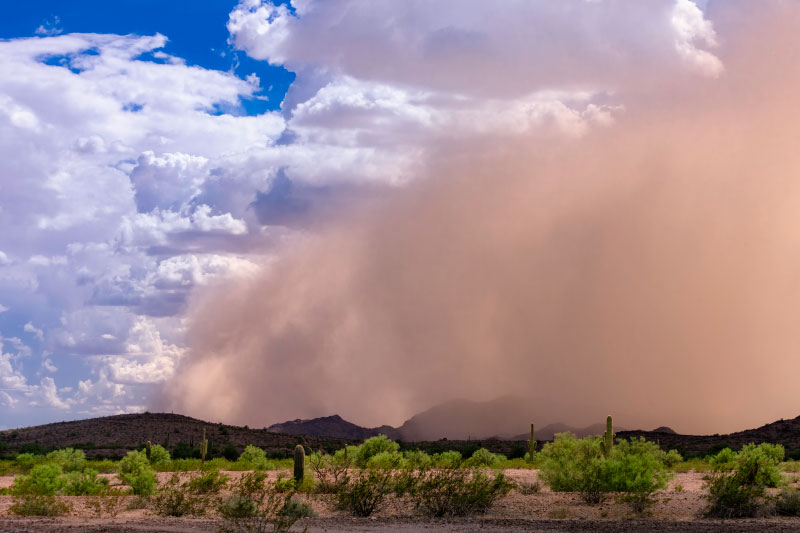 What goes down must come up?

Miss Ellie was driving us home from Glendale, while I picked the gravel out of my teeth, and flushed dust out of my eyes.

“Is this a real Arizona dust storm?” she asked, as she peered out the windshield, looking for Highway 60.

We had spent two days at the Glendale Folk & Heritage Festival at Sahuaro Ranch Park. Sahuaro Ranch is one of my favorite places, and the festival was a great success.

But on Sunday, the wind came up and started blowing things around–peacocks, canopies, mandolins. I coached Ellie on how to carry our music stand so the wind didn’t catch its flat surface. Given the right aerodynamic circumstances, she’d have taken off like a Cessna. I could have carried it, but I had to carry my water bottle, and the pea gravel that had blown into my pockets.

As she drove through the gloom, I told her about REAL Arizona dust storms. In the 1960s, before Interstate 10 was completed, I reported on a chain collision near Picacho that wrecked 22 cars, killed a couple of people, and sent several more to Tucson hospitals.

As I-10 progressed, some friends were seriously injured when they pulled off the freeway in a dust storm. Someone followed them onto the shoulder and rammed them.

“I used to watch a huge wall of dust come around the west end of the Estrellas and roll right over us,” I told Miss Ellie. “It looked like the Vermillion Cliffs coming at us.

“People used to spend days cleaning their swimming pools after a dust storm. Tolleson is four blocks north of where it was before that one big blow in the seventies.”

As we passed through Morristown–I think it was Morristown–the dust cleared up a little and we thought we were out of it.

It appeared that before we got there, the wind had loosened boulders at the top of the cliffs. They had rolled down onto the shoulder, and some had bounced onto U.S. 60.

But as the wind gained force, and bulked up with the added particulate matter, it became more robust.

As we drove along toward home, the wind was blowing those rocks right back up to the top of the cliffs.