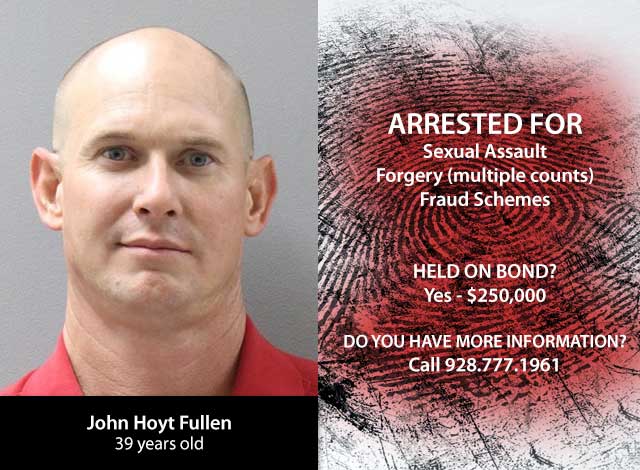 At the end of April 2020 the Prescott Police Department responded to a report of Sexual Assault that occurred within the City of Prescott. An adult female victim reported being sexually assaulted by 39 year old John Hoyt Fullen at his Prescott residence. During the course of the investigation it was learned that the suspect was also a Level 3 Registered Sex Offender residing in the City of Prescott. Evidence led to the arrest of Fullen and he was booked into the Yavapai County Jail on one count of Sexual Assault and has been held on a $250,000 bond since that time.

During the course of the ongoing investigation into the Sexual Assault, Detectives discovered that Fullen was the owner and operator of American Veteran Movers, a moving company based out of his Prescott residence. It was also learned that Fullen represented the American Veteran Movers company as being owned and operated by an all veteran staff. With the assistance of the Veteran’s Affairs Director and the Office of the Inspector General, Detectives learned that Fullen was not a Veteran and had never served in the United States Military. Detectives found that Fullen had obtained Veteran status on his Arizona Driver’s License and registered two vehicles in his name through the Arizona Department of Motor Vehicles and obtained Purple Heart license plates for them using forged documents.

A former customer that had hired American Veteran Movers was told by Fullen that he was a combat veteran having served in the Marine Corps and was injured in Iraq and
received a Purple Heart Medal. This customer stated that he hired Fullen and his company solely because it was presented as a Veteran owned company that only employed US Veterans.

The investigation reveled several documents that Fullen presented to the MVD that are believed to be forged, including a fake Purple Heart medal certificate and a fake American Legion membership certificate.

Fullen was additionaly charged with multiple counts of Forgery and one count of Fraud Schemes and has been booked into the Yavapai County Jail on the new charges. Detectives are working with the Office of the Inspector General on an additional Federal Stolen Valor case involving Fullen.

If you have hired American Veteran Movers and feel that you were given false information to gain your business, please contact Detective John Hanna at (928)777-1961.