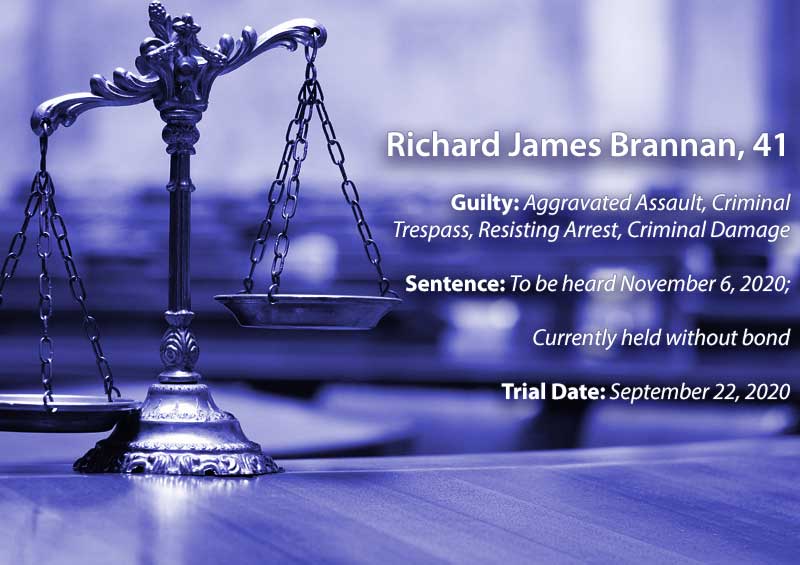 On Tuesday, September 22, 2020, Richard James Brannan, 41, of Prescott, was convicted by a Yavapai County jury of Aggravated Assault, Criminal Trespass, and Resisting Arrest. The trial judge, the Honorable Krista Carman, found Brannan guilty of the additional offense of Criminal Damage.

The charges stem from an incident on November 15, 2018, at a remote house located in Prescott.  The victim notified the Yavapai County Sheriff’s Office that he saw a dog on his property that he recognized as belonging to Brannan through his remote camera system and that he was concerned someone may have broken into this home. When deputies arrived, they found several garden tools on the ground and broken glass from an open door. During a search of the residence, the deputies located the defendant in a bedroom. Brannan rushed one of the deputies and a struggle over the deputy’s rifle ensued. The second sheriff’s deputy pepper sprayed Brannan with little effect. During the struggle, Brannan yelled to his dog to attack the deputies. Brannan was eventually subdued and taken into custody.

The prosecutor, Deputy County Attorney Casi Harris, expressed her appreciation for the jury’s work and attentiveness to the case. “I am grateful for the jurors’ time and willingness to serve, especially during this difficult time.” Harris further noted the professionalism and restraint of the Yavapai County Sheriff’s deputies who responded to the scene that could have resulted in a worse outcome.

Brannan is being held without bond and is facing 7.5 to 24.5 years in the Arizona Department of Corrections.  Sentencing is set for November 6, 2020 at 10:30 a.m. before Judge Carman, Division 4 of the Yavapai County Superior Court.