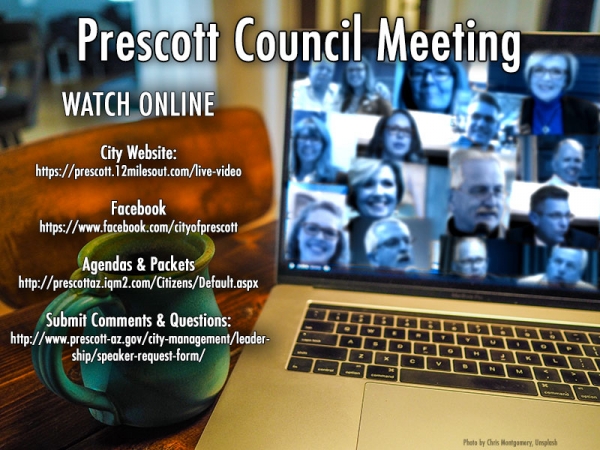 It's the live update of the Prescott Council meeting.

Many things for the Council to Discuss, as they resume meetings open to the public.

A. Discussion Regarding Amendments to the Agreement for the Prescott Community Access Channel and Prescott Media Center Services

They will postpone this item from the voting agenda until more details are worked out.

B. Discussion of the 2020 Arizona League of Cities and Towns Resolutions.

C. Approval for the Purchase of Budgeted Duty Equipment and Uniforms from FX Tactical, LLC using State Contract ADOC 18-192870 in the Estimated Amount of $48,000 during FY21. Funding is Available in the Police Department Budget
Council Memo Printout

D. Approval for Rose Paving to Perform Sunday and Night Work in the Parking Lot on the Southwest Corner of SR69 and Lee Blvd from 8:00 pm to 6:00 am Between August 28 and September 6, 2020.
Council Memo Printout

E. Approval of City Contract No. 2021-017 to Kary Environmental Service, Inc. in an Amount not to Exceed $102,486.00. Funding is Available in the Solid Waste, Water and Wastewater Funds.

F. Approval of City Contract No. 2021-023, an Agreement Between the City of Prescott and Prescott Area Wildland Urban Interface Commission (PAWUIC) for Fuels Reduction and Treatment Services.

a. Agreement Between the City of Prescott and Prescott Area Wildland Urban Interface Commission

b. Fuels Reduction and Treatment Crew List of Equipment with Daily Rate for Use

G. Approval of City Contract No. 2021-027 with DATAMATX for Utility Billing Printing and Mailing. Funding is Available as Part of the City's Operating Budget.

I. Approval of the 2020 Arizona League of Cities and Towns Resolutions.

J. Adopt Resolution No. 2020-1755, Approving City Contract No. 2014-160A4, an to the Joint Funding Agreement with the United State Geological Survey (USGS) for Data Collection within the Big Chino Sub-Basin.

Items H and I were pulled.

All other items passed unanimously.

Item H was postponed for a later meeting.

Item I was modified to read the items that are being supported and not supported. That passed unanimously.

A. Adoption of Ordinance No. 2020-1727 Amending City Code Title VIII, Chapter 8-2, Section 18 Use of Right-of-Way for Small Cell Wireless Facilities, Monopoles and Utility Poles for Collocation.

A clean-up measure to bring City code in line with state law.

B. Resolution No 2020-1757 and City Contract No. 2021-022 a Pre-Annexation Development Agreement for Stringfield Ranch

This will help connectivity for the Circle Trail. They have to purchase a strip of State Trust land in order to do this annexation.

The number of homes has been reduced from over 400 to just over 200.

Representative Goode does not agree with this - he says that the benefits of completing the Circle Trail are marginal.

Councilwoman Rusing also disagrees. She would like to see cost-benefit analysis. "It will be a burden on the City of Prescott in perpetuity," she says. Additionally, she notes that Williamson Valley "wants to stay rural".

Steve Sischka notes that this will help stabilize the water in the area, because it will reduce the number of private wells. The roads will remain private within the development.

Councilwoman Scholl points out that this can make a difference between 400 wells and septic tanks, versus being on the City water.

Councilman Blair voices his full support. "I support this 100%."

Councilwoman Orr notes that if it is not annexed, it will be 431 homes instead of 261, complete with wells and septic. "These will be high-end homes, with people that will be philanthropic and giving in the community."

Mayor Mengarelli says he is baffled at the opposition, this is a lower density project than will be put in if it is built within the county.

Comments by Ralph Hess and Leslie Hoy are read. A Zoom comment from Howard Mechanic was also heard. (Well, kind of. The volume was very low and difficult to make out.)

Councilwoman asked about how much of the plastic water main has had to be replaced.

The city allows both, depending on the topography and the material of the ground in which it is going.

Councilwoman states that the life cycle of ductal iron is 90 years.

D. Approval of City Contract No. 2021-025 with Lyon Engineering for Design and Other Engineering Services for the Sundog Trunk Main Phase C3 Project, in an Amount not to Exceed $1,466,418.00. Funding is Available in the Wastewater Fund.

There will be a savings of at least $300K due to rewriting contracts.

"This Item is for the approval of Contract No. 2021-025 for the Sundog Trunk Main Phase C3 Sewer Project including a regional lift station to Lyon Engineering in an amount not to exceed $1,466,418.00 for design and engineering services. The design includes the regional lift station, and approximately 25,000LF of 18-inch diameter force main from the new lift station near Sixth Street to the southeast corner of Highway 89 and Prescott Lakes Parkway. The design also includes approximately 2,550 LF of 24-inch gravity sewer main from Sonora Drive connecting to the new lift station in the vicinity of Sixth Street."

The route being proposed is due to the fact that it stays all within the municipal boundaries of the City of Prescott. The city was unable to negotiate easements, so they are using this alternate route.

b. Site Plan and Elevation Drawings

c. View Analysis with no Building

i. Public Correspondence in Opposition

Mayor Mengarelli is recusing himself from this property because his wife is the listing realtor. He also clarifies that he has no other financial interest in this property.

Councilman Sischka has a conflict of interest in that he is on the Board of the YRMC medical trustees as well as being on the Prescott City Council.

It is not a variance, it is within the allowed height of 100 feet, but it is subject to Council approval.

The patient room wing is proposed at 71 feet. Banner Building placement will not significantly impact the views of the Dells from Pinon Oaks subdivision.

We cannot hear the presentation by the architect online. They asked him to speak up but it is still not audible.

Now it is better.

Basically, they are explaining the design of the hospital and why it needs to be 75' feet in height. A very small percentage of the building will be over 50', and much of it is is mechanical items, ie: air conditioning, etc.

Hospitals must be designed according to accepted standards.

The Planning Commission reviewed this extensively, it was approved 6-1.

Councilman Blair pointed out that it is close to the same height as YRMC.

Councilman Goode says that he is favorably inclined to Banner Hospitals in general, and he thinks that this will be a benefit to the community overall. Goode commented, I think that people that purchase a home in the area of a major artery in the community, has to realize that property in the area is likely to be developed.

Rusing notes that this was a very good presentation and that we as a community are blessed to have two medical facilities.

Mayor Pro Tem Billie Orr also thanks Dr. Askari for the donation of the Dells portion of the property to the City of Prescott for open space.

Motion passes 5-0 (that's unanimous due to the recusal of Mayor Mengarelli and Councilman Sischka.)

9 acres, 134 beds. The project would contain a central building for the living units, plus a potential hotel and medical offices.

This is the very early stage in the project, and much of it may need to be permitted by ADOT.

Councilwoman Rusing is concerned about the noise and the quality of life of the residents might be affected. She would like to require additional soundproofing.

Councilman Goode asks if there will need to be pump stations for the effluent.

Mayor Pro Tem says that she thinks it looks like a wonderful project.

Quote: George Patton "Wars may be fought with weapons, but they are won by men. It is the spirit of men who follow and of the man who leads that gains the victory.”