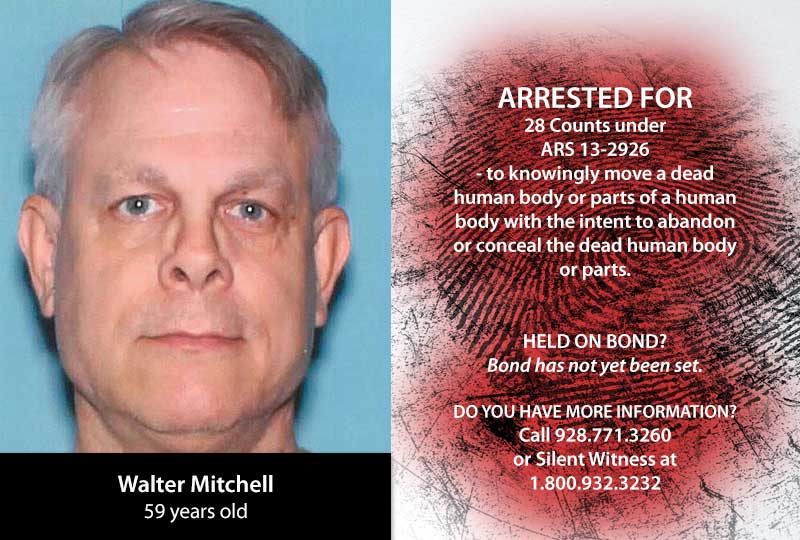 Diligent work by YCSO detective’s investigating this case has resulted in the arrest of 59-year-old Walter Mitchell who was found in Scottsdale earlier today.

Background – Please note the investigation remains active and not all details are available.

Using evidence recovered from the scene, detectives discovered the remains were likely connected to a business based in Seattle, Washington, identified as ‘Future GenX.’ Mitchell owned the business which involved the management of cadavers for research and had recently closed. Working with local police in the Seattle area, detectives obtained information that Mitchell left Seattle in 2020 with human remains belonging to 5 individuals. Detectives traced Mitchell’s travels to the Prescott/Chino Valley communities and then recently to Scottsdale where he was contacted and arrested this morning. Mitchell’s motivation for his actions are unknown currently.

During the investigation, detectives sought out licensed facilities in Arizona who manage cadavers for medical research, and all have been extremely cooperative. They want the public to know that this case in no way represents the work they do to care for loved ones who have donated their bodies to important education and research.

Sheriff Mascher would like to share the following statement – “This situation is unimaginable, and I am so sorry for the families whose loved ones were donated to research and treated in such a horrific fashion. I want to thank the community for their patience as we investigated this case and am very proud of our detectives, staff, and volunteers, for the work they did to identify and arrest the suspect so quickly. At the onset, it was important to determine that this case did not involve a serial killer and is why, working with Sheriff Elect Rhodes, I directed all available resources to the case.

As I retire this Friday, I want to thank the community for their support and know the agency will continue to do great work.”

Sheriff Elect Rhodes provided the following statement - "The disrespect shown to the deceased in this case by those who were charged with caring for their remains is abhorrent and intolerable. Today's arrest is a big step in getting accountability and honor for those whose remains were so cavalierly treated. Nothing but gratitude for the people of the Yavapai County Sheriff's Office, Medical Examiner's Office, and County Attorney's Office for their non-stop work on this case"

Following the December 26, 2020, report to YCSO that 2 human limbs were found in the area off Contreras Road, a search of the area that afternoon resulted in the recovery of 19 limbs including detached arms and legs. The following day, December 27, 2020, detectives and searchers found 5 additional limbs. Also, on December 27, 2020, YCSO received a phone call from a hunter in the Camp Wood area who reported finding 2 severed human heads. Deputies arrived and confirmed what he had seen, and a follow-up search revealed 3 more human heads.

Based on some of the materials found that were associated with the remains at both sites, including ‘puppy pad’ material, it was determined the body parts at each site were likely related and connected to the same suspect. Forensic follow-up by the Yavapai County Medical Examiner is necessary to confirm such findings and that process is underway.

As always, our Search and Rescue volunteers stepped up to assist without hesitation to provide search efforts under the direction of YCSO detectives. Yavapai County Medical Examiner, Dr. Jeffrey Nine, and his team have been crucial partners in this investigation.

If anyone has additional information regarding this investigation, YCSO is urging that you call 928-771-3260 or contact Yavapai Silent Witness at 1800-932-3232, online at