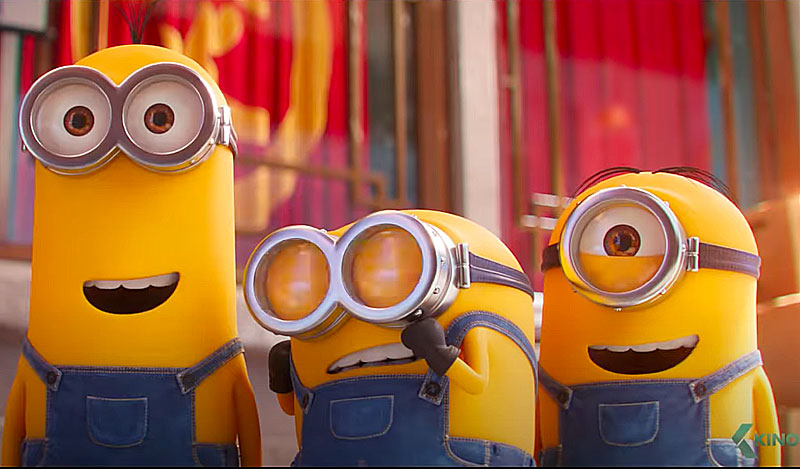 The cuteness of the Minions is smothering, but we love it!

Join the cute Minions, and bring along a mini-me or two!

"Bello, tara tropa, talaliloo ti amo" is a typical Minion greeting that we find irresistible. It means "Hello, come friends, we love you." Not only are the Minions cute as the dickens, but they have their own language, which is also totally cute. The Minions smother us in cute, but we love it.

The cuteness of the Minions is balanced by the ambition of their leader, Gru. He wants to be a great super-villain. In this origin tale, we take the way back machine to Gru's childhood. He is twelve.

"Minions: The Rise of Gru" is the fifth film featuring the tiny, busy, goggled Minions. The four films have averaged over $900 million in box office receipts. Fans will again come out in droves to see the new movie featuring their little pals.

Director Kyle Balda also directed "Minions" and "Despicable Me 3," films that grossed over a billion dollars each. Even in Hollywood, making back-to-back billion-dollar movies gets noticed.

Elderly Oscar winners Alan Arkin (88) and Julie Andrews (86) also provide their voices. Andrews plays Gru's mom, and Arkin plays Wild Knuckles. Frenchman Pierre Coffin voices each and every one of the Minions. He is mainly responsible for the lilting language.

I always like going to the movies, but I have not enjoyed a film more this year. Various Minions occupy most of the screen time, certainly more than in the other movies. People want more Minions, and we got 'um. Things that make a movie special are the add-ons, the additions that give extra color and enjoyment for the viewer that might not directly further the plot. My favorite of several in "Minions: The Rise of Gru" is a Minion choir at a funeral singing "You Can't Always Get What You Want" in the Minion language. That put a big smile on the faces of the adults.

This is a charming film for people of all ages to enjoy. I recommend it without qualification.

Made with moderate by blockbuster standards eighty-five million dollars, the four sawblade "Minions: The Rise of Gru" carries a very mild PG rating. For that reason, and for its shortish run time of one hour and twenty-seven minutes, this is a movie suitable for all ages. The small fry will love to see the Minions' antics, and the grown-ups will love to see the Minions' antics. This is called a win-win in the movie business.

We have two Arizona connections with this animated feature. Director Kyle Balda comes from Tucson, and Danny Trejo played in "Jakes Corner," a movie made in our neighborhood.

Rate this item
(0 votes)
Last modified on Saturday, 02 July 2022 11:05
Published in Reviews
Tags
« Review: b. simple Restaurant Movie Review: Where the Crawdads Sing »
back to top