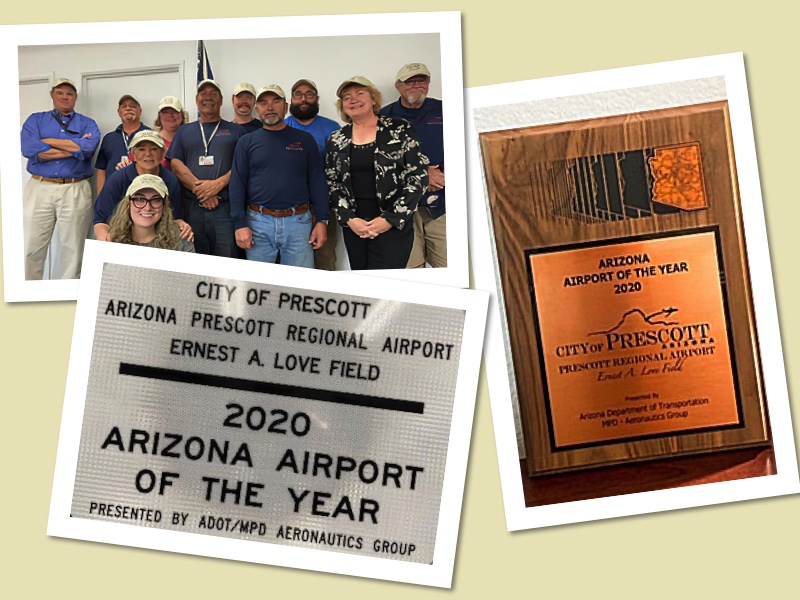 The Prescott Regional Airport has once again been recognized for its excellence.

In his remarks during the award presentation, ADOT-Aeronautics Group Director Don Kriz highlighted the airport’s multiple achievements in the past year, which included: seeking political advocacy for additional State funding support for Arizona airports which secured an extra $10M in AZ Airport development funding; completing an economic impact study showing PRC’s generation of $160.3M in economic impact, conducting an innovative on-site ARFF Annual Live Burn training activity; receiving Federal and State support for construction of a new $15M passenger terminal; and achieving the status of fastest growing commercial service airport (2019) in Arizona with an increase in passenger enplanements of 174%.

In a later session on legislative advocacy, State Rep Noel Campbell expressed his admiration for Prescott’s approach to gaining lawmaker and regulatory agency support for the Airport’s future development.  In his comments he said that Prescott “did everything right!”

Sobotta also credited the FAA and ADOT for helping Prescott secure financial support for Federal and State grants, along with the City of Prescott Mayor and City Council for their unwavering support.

“It is truly an honor for the City to receive this recognition from ADOT-Aeronautics for the hard work and accomplishments our team at PRC has accomplished the past year,” said Prescott Mayor Greg Mengarelli.

The City will receive several commemorative items, courtesy of ADOT, as a result of this award, including a plaque, a wall sign and a large roadway sign which will be placed at the entrance to the new terminal roadway system.

In January 2020, PRC broke ground on a new 18,000 square foot passenger terminal and is currently scheduled to be open in late March 2021. PRC has daily, double hub service to Denver, Los Angeles and beyond.