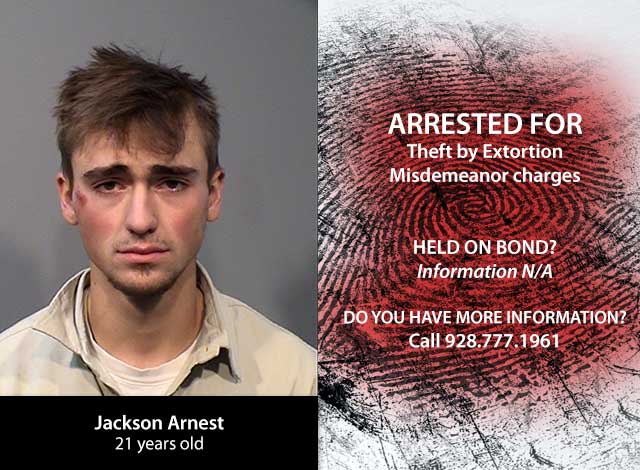 The mover demanded more money and threatened the victims.

The Prescott Police Department was called to the scene of an incident which occurred on Wednesday November 11, 2020 in the 500 block of Yavapai Hills Drive involving a dispute over an individual who was hired to move belongings to this location.

When officers arrived they found a large moving truck physically blocking the driveway to a residence belonging to the victims who had called the police.  The victim’s indicated that they hired 928 Movers, owned and operated by twenty-one year old Prescott Valley resident Jackson Arnest, to move some items from one location to another with an agreed upon estimate of between $550 and $600. The items were moved and the following day the suspect returned and demanded additional payment in the amount of over $900.  The victims refused to pay the total amount and offered a compromise between the two prices of which the suspect refused and then used the moving truck, which he rented, to block the victim’s driveway.  The suspect refused to leave the property or to allow the victims  to leave and continued to threaten both victims and attempted to extort additional money from them.

The suspect was subsequently arrested and booked into the Yavapai County Jail on one felony count of Theft by Extortion and several misdemeanor charges related to the incident.

We would like to remind the community that in some cases this type of incident may be considered a civil matter but it is always best practice to call us in the event that the actions of the other party rise to the level of criminal activity or are a part of a larger scam.