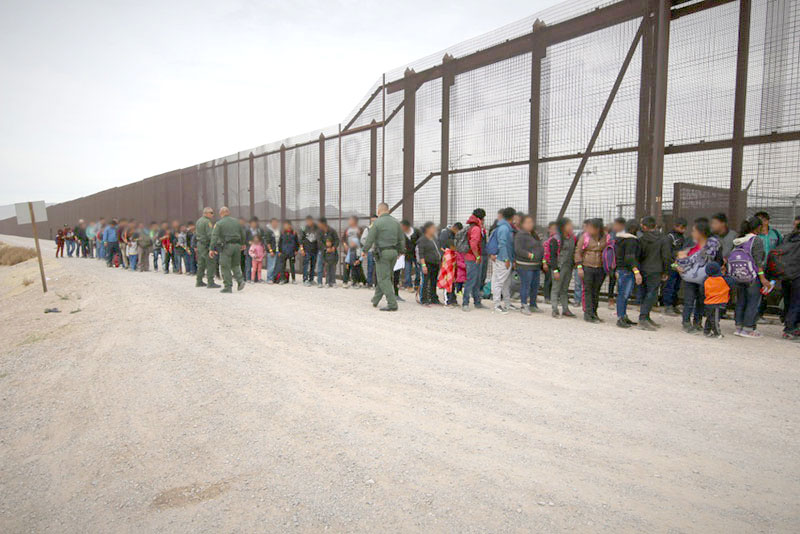 “If this administration isn’t going to do anything, then we will."

PHOENIX — Governor Doug Ducey issues a Declaration of Emergency and announced he is deploying the Arizona National Guard to the state’s southern border to support local law enforcement efforts as the nation experiences a rapid increase in apprehensions and migrant children in federal custody.

The State will provide up to $25 million in initial funding for the mission.

"The situation in our border communities is just as bad—if not worse—than the coverage we've been seeing," the Governor stated. "It's become evidently clear that Arizona needs the National Guard, and the White House is aware of that. Yet, to this day, there has been no action from this administration, and it doesn’t look like they are going to act any time soon. If this administration isn't going to do anything, then we will."

View the Governor’s announcement below:

Under the leadership of the newly appointed Adjutant General and Director of the Arizona Department of Emergency and Military Affairs Brigadier General Kerry L. Muehlenbeck, up to 250 Guardsmen will go to border communities and will be available to support other law enforcement agencies, like state troopers. The Arizona National Guard will:

“The dedicated members of the Arizona National Guard stand ready to support our local law enforcement partners as they address border security, just like we have done for many years when called upon,” said Brigadier General Kerry L. Muehlenbeck. “Our guard members will tackle a wide range of tasks including medical operations, camera maintenance and monitoring, data analysis, and logistics and administrative support to local sheriffs. I am proud of the men and women of the Arizona National Guard for their commitment to serving and protecting our state, all while they balance federal requirements and full-time civilian commitments. I am grateful for all they do to keep Arizonans safe and for the many employers who continue to support them."

U.S. Customs & Border Protection in March had more than 170,000 apprehensions at the Southwest border. Nearly 19,000 of those apprehensions were unaccompanied children — more than four times the number of kids apprehended in March 2020.

“The crisis at the border is serious and cannot be taken lightly,” said Yuma County Sheriff Leon Wilmot. “The Arizona National Guard will provide much-needed support to our officers and safety officials, and will help ensure Yuma and other border communities are further protected from dangerous and illegal activity. By deploying National Guard assets, the Governor will allow me to deploy more first responders to mission critical tasks where we will work side by side with our federal partners to target, apprehend and prosecute transnational criminal organizations. My thanks to the Governor for taking action to protect Arizonans, law enforcement and legal immigration.”

Governor Ducey will visit Yuma County tomorrow, April 21, to get more details from community leaders and law enforcement officials about what they’re seeing on the ground.

“The federal government’s actions have made the border less secure. This threatens the safety of our communities and law enforcement,” said Cochise County Sheriff Mark Dannels. “Border towns and officers need support as the crisis at the border escalates. I’m grateful to Governor Ducey for taking action and sending the National Guard to help. We welcome immigrants with open arms — but it needs to be done legally and orderly to ensure we are protecting our communities, state, and nation.”

Last month, the Governor traveled to Douglas, Arizona to meet with Sheriff Dannels and other safety officials and get a first-hand view of the security and humanitarian situation at the U.S.-Mexico border. After taking an aerial border tour, the Governor received a briefing and held a press conference and a border security roundtable.

“The security of Arizona and our residents is our first priority,” said Senate President Karen Fann. “Illegal crossings put our border towns, safety personnel and all Arizonans at risk, but also the immigrants who are facing unsafe conditions as they cross into the state. My thanks to Governor Ducey for taking this initiative to safeguard our state and protect our communities.”

“We need to uphold the law when it comes to immigration,” said House Speaker Rusty Bowers. “The National Guard will help support law enforcement and security officials working hard at the border, and it helps combat the Democrats’ misguided message that crossing the border illegally is acceptable. I strongly support this action by Governor Ducey, as it’s the right decision, and I appreciate his quick response to this crisis.”

View the Declaration of Emergency HERE. 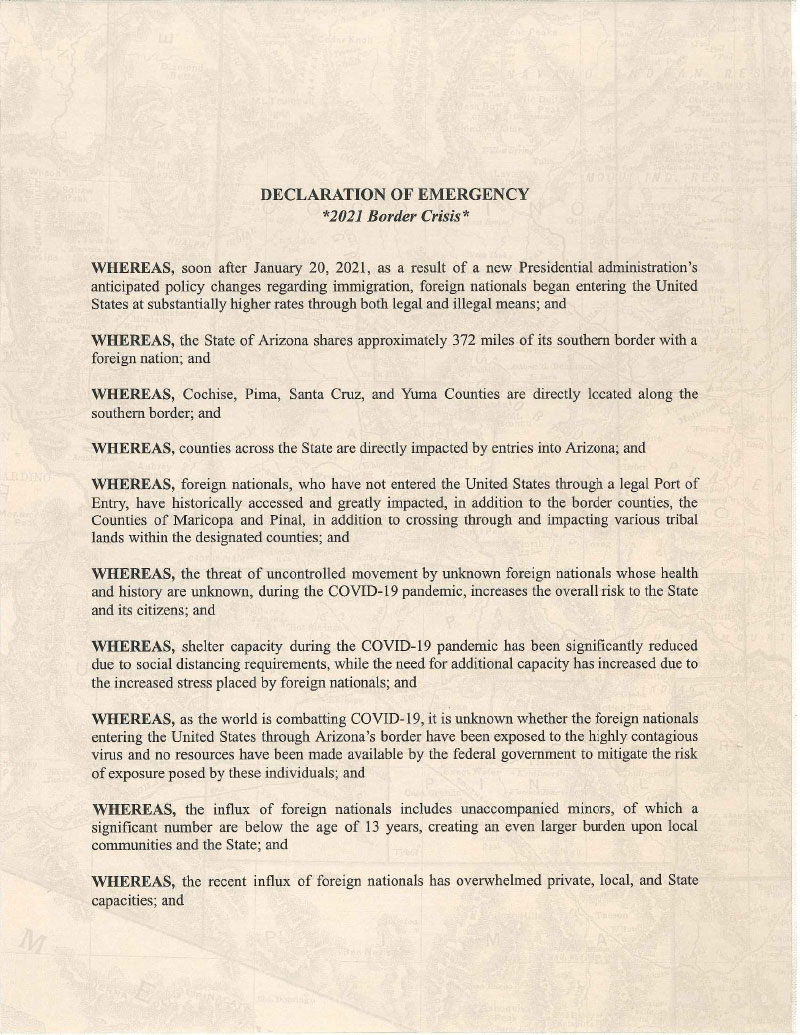 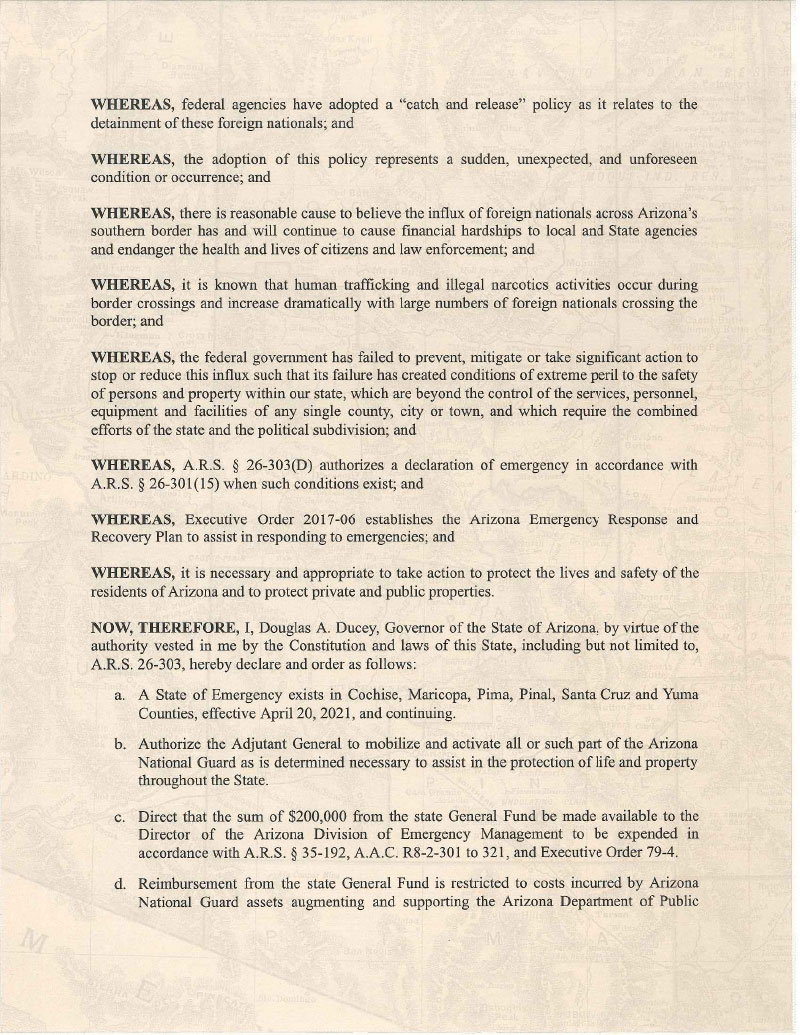 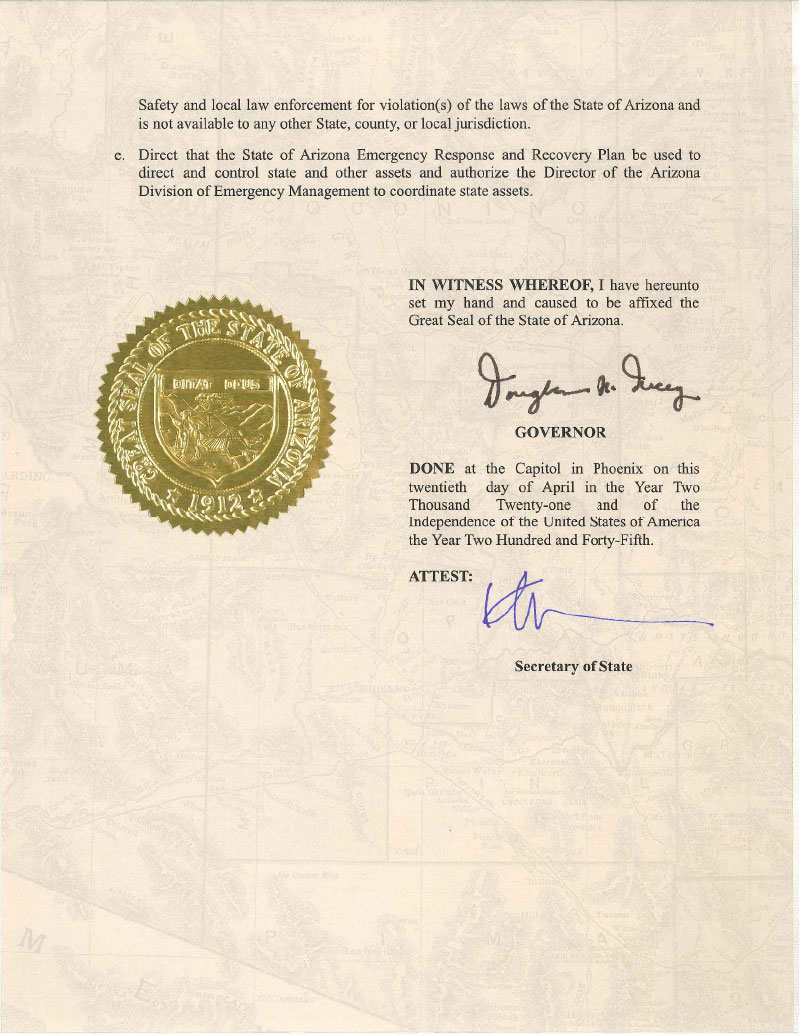