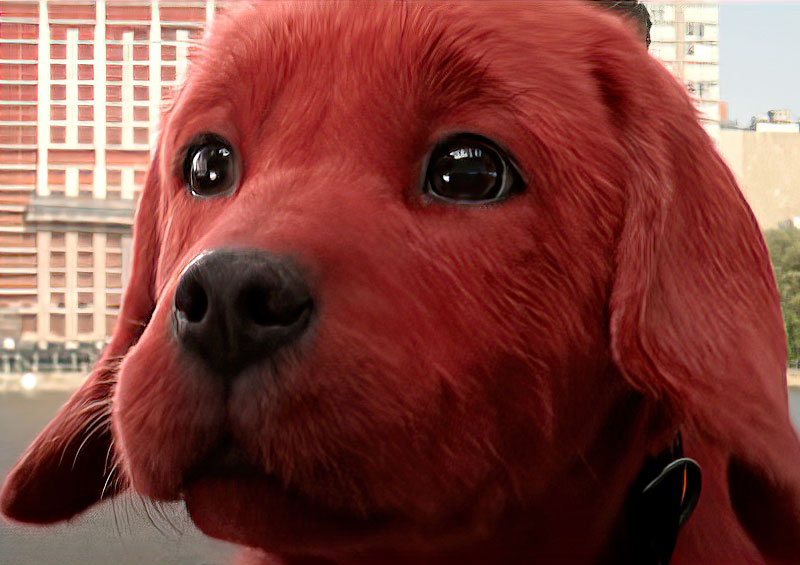 While less charming than the source material, “Clifford the Big Red Dog” will keep the younger set in the seats for an hour and a half. None of the glaring errors, omissions, or miscalculations in the film that leap out for adults will rise to the notice of the youngsters. If they don't notice, we shouldn't notice either. This is meant for young children and on that basis, it does the job.

A good deal of the film involves slapstick-style chase scenes with a fight in a bodega with potato chips as weapons and a giant, galloping dog fleeing from the authorities across New York City. That is all in the spirit of good fun and the kids seemed to enjoy it. I liked the scene where angry sheep and two-headed goats are loosed upon the city from a biotech lab.

Director Walt Becker has managed five other feature films. You may remember his “Van Wilder” and “Wild Hogs.” We see some of his exuberant style in the action scenes.

Eighty-two-year-old John Cleese plays a cheery, mysterious, and perhaps magical, Mr. Birdwell, the origin of the little red puppy that quickly becomes “Clifford the Big Red Dog.” The name of his character is a tip of the hat to Norman Birdwell, the author of the original books. The real-life Mr. Birdwell wrote over forty Clifford books. He had his prodigious output translated into thirteen languages and before his death sold some one-hundred-twenty-six-million books. I do admire that success.

Clifford as a puppy is straight-up adorable. The computer-generated image of the red, Labrador-looking dog is effective and realistic.

We do get a strong positive message in the film. Emily, Clifford's owner, has problems as the new girl in a private school. The other tween girls fasten on her like piranas, sensing her vulnerability. We absorb the lesson that bullying one's classmates does not make for a happy occasion.

Another, unsaid lesson is that keeping a dog the size of an elephant in a New York apartment will present distinct challenges.

This PG-rated movie for children has little to recommend it to adults. “Clifford the Big Red Dog” runs for one hour and thirty-six minutes. It gets only a minimal two sawblades but the intended viewers will like it much more.