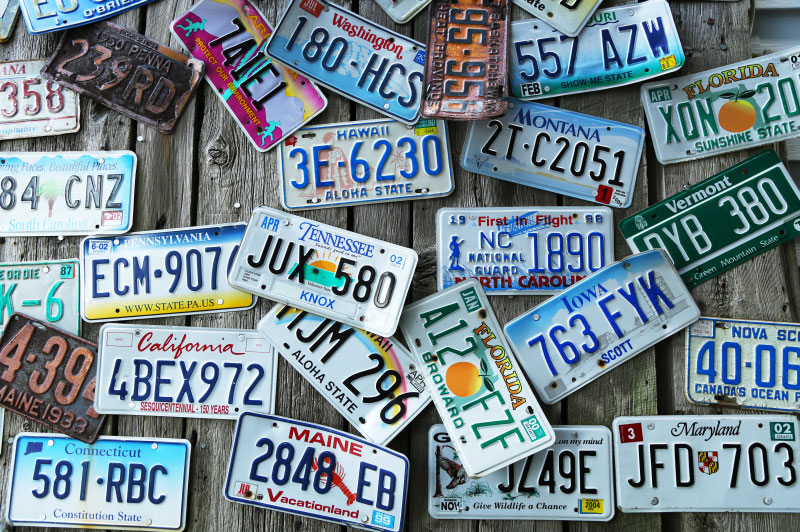 How many license plates from other states can you count?

I saw an Arizona license plate in the parking lot at the post office today, among all the plates from Wyoming, Indiana, Idaho.

I walked toward the Arizona plate, hoping to see a familiar face. Then I realized it was my own car. On the way, I passed plates from Alaska, Montana, Massachusetts and Ontario.

The snowbirds are here, fleeing the cold elsewhere. They flock like the Canada geese who also visit us in winter, but there are a lot more snowbirds than geese.

I dreamed last night that all the motorhomes traveling Arizona stopped at once. In my dream, I drove around Wickenburg and Phoenix for hours, looking for a parking place.

Some midwestern states have lost entire Congressional districts because so many of their residents are in Arizona.

Did you ever play the license plate game while traveling, seeing how many states you could count? You can do 3,700 miles worth of collecting on a winter day in Yuma. My personal best for this season is a plate from Nova Scotia, seen a few days ago in Lake Havasu City.

Quartzsite, on the desert 100 miles west of Wickenburg, has a year-round population of 3,500 people. That swells to 125,000 or more in winter. People in RVs have made it as famous a destination as Scottsdale or Sedona.

We went to Quartzsite during the annual gem and mineral show, just to watch in horrified fascination. A light at the busiest intersection flashes red all four ways, and visitors bluff each other to get through. A left-turn is a near-death experience. There is safety in gridlock.

One couple we met came from Minnesota, and they had planned to stay in Wickenburg. But as they neared Wickenburg, Larry, anticipating a romantic evening in the camper with Debbie, reached over and squeezed her knee. Debbie said he could go a little farther if he wanted to, so Larry drove to Quartzsite.

Another couple, Ole and Lena, arrived from Wisconsin in a new Ford F-350 truck with duals on the back, and parked their new fifth-wheel trailer out on the desert. Last year, they drove their old pickup camper-one of those towering cab-over jobs. Lena said she was driving near Topock when she came to a railroad underpass with a sign that said, “No Trucks. Clearance 11 Feet.” Lena said, “Ole, I think our camper’s too high for that bridge.” Ole said, “Hey, there’s no cops around. Go for it!” We met an Illinois couple who spend every winter in Apache Junction, but take a week off and come to Quartzsite just for the spectacle. They sold their farm and bought a motorhome, to the horror of their children. They set out five years ago to travel around the country, and they’ve never called home.

Many snowbirds become full-time residents of Arizona, and others have winter homes here. They took pretty much like the rest of us. We natives (I’m first-generation) don’t have to count back far to the time when our ancestors came here.

But portable snowbirds flock here in astonishing numbers, spreading out from Yuma to Bowie to Salome to Tucson. Some camp out on the desert, but most prefer RV parks.

Quite a few drive here in deluxe motorhomes that cost about $10,000 a linear foot, not counting the car or SUV being towed behind. These vehicles have the power to move right along, when they can find a passing zone. Like the rest of us, they get stuck behind underpowered motorhomes and slow drivers. Some snowbirds are so slow that they don’t get here until it’s time to go home.

Chambers of Commerce would prefer that we use the more respectful name “winter visitors,” because they spend a ton of money here. I like the term “snowbird,” and I mean no disrespect. I admire geezers who pick up and go looking for warmth. I just wish they wouldn’t block the Safeway parking lot with a 40-foot motorhome towing a 15-foot station wagon.

Wickenburg is a horsey town with a cowboy tradition, so there are RV parks for snowhorses. People bring their horses with them. A typical party arriving here from Montana or Wyoming might consist of a husband driving a big pickup with duals on the rear, towing a fifth-wheel trailer, and his wife driving another truck, towing a horse trailer. I thought I saw a horse driving one rig, but the long face may have been a really depressed Montanan.

I’ve met Canadians who know more about Mesa than I do. They are not so much in evidence this year, maybe because the Canadian dollar has taken a real beating relative to the U. S. dollar.

That may be just as well. Some retired Canadian farmers drive our main roads at 42 mph, as though they were on an Alberta farm road.

Some summer I’m going to Canada. I’m going to sit around their malls, and complain about their taxes, and drive 49 mph in a 65 mph zone. I’m going to block half an intersection while Ellie reads the map.