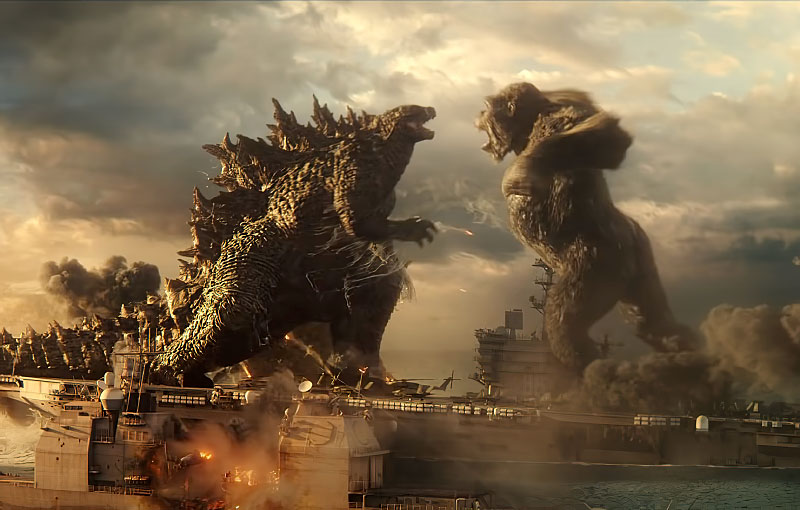 Two of our favorite giant monsters are together again for the first time since the 1962 classic “King Kong Vs. Godzilla.” The 1962 film might well be called cheesy and flawed but the new, just released “Godzilla Vs. Kong” we can think of as cheesy, flawed, and super expensive.

We have to give the people at Legendary Pictures credit for spending an estimated $200 million to make this loud but nonetheless boring monster against monster flick. Legendary Pictures has made such unmemorable but expensive films as “Pacific Rim,” “Crimson Peak,” “Warcraft” and “The Great Wall.” Legendary Pictures has been captured by and is a subsidiary of the Chinese company, the Wanda Group. Sometimes a film company does not even try to make a compelling film and this is one of those times.

We do get to see Hong Kong get wrecked by battling Titans, as the film calls the big monsters. That is about it as far as fun things, from my perspective. The film breaks no new ground. We have a scene where monsters shoot different colored rays at each other from their open mouths. We have huge wrestling matches between monsters. Seen that before, haven't we? We have a small Oriental girl who comes in and out of the story to be cute, which she easily accomplishes. I think the target viewers are young people who have never seen either a "King Kong" film or a "Godzilla" movie and so have nothing to compare the current film to.

It is very loud, I will give it that.

Alexander Skarsgard and Lance Riddick are the two famous people in the film.

With a huge budget and millions of people around the world who have never before seen a “Godzilla” or a “King Kong” movie, the producers might make their money back. The two sawblade film lacks any attempt at character development or building interesting tension. Every single thing that happens in the film is predictable. The PG-13 film runs for one hour and fifty-three minutes.

There have been thirty-six “Godzilla” films, some worth watching. “King Kong” has made the big screen a dozen times. We forgive a lot with monster films. This time we must have extra forgiveness.