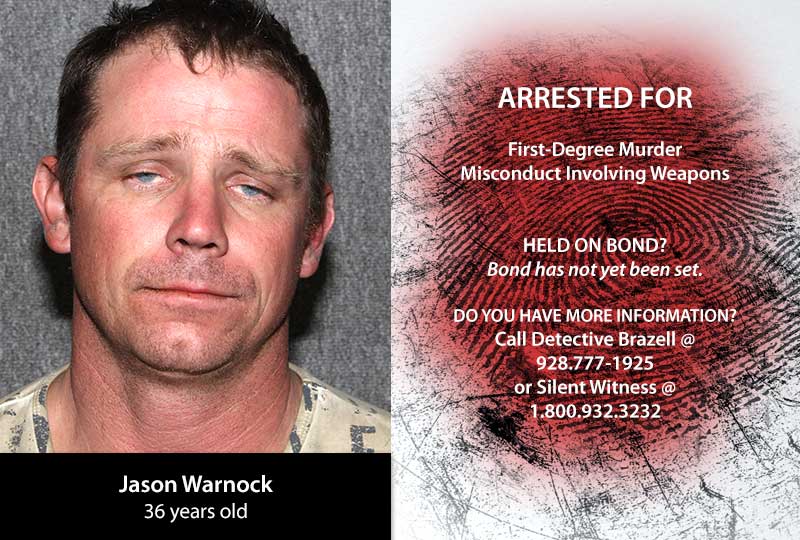 Man brings in girlfriend with gunshot wound to YRMC

On May 16th, 2022, at approximately 10:29 P.M. Prescott Police Officers responded to Yavapai Regional Medical Center, located at 1003 Willow Creek Rd. upon the report of a female victim that had sustained a single gunshot wound.

Through the course of the investigation, it was determined that the victim, Skylar Hughes, a 31-year-old female, had suffered a single gunshot wound and shortly thereafter, died as a result of her injury. Hughes had been brought to the hospital by her boyfriend, 36-year-old, Jason Warnock. Warnock and Hughes had been living together in a travel trailer around the area of Williamson Valley Rd and Iron Springs Rd, where the incident took place. Warnock admitted to shooting Hughes and later transporting her to the hospital, where she was pronounced deceased.

Warnock was booked into the Yavapai County Jail on charges of First-Degree Murder and Misconduct Involving Weapons. Currently, we are still actively investigating this incident. Anyone who has any information reference this incident are encouraged to contact Detective Brazell at (928)777-1925.

Rate this item
(0 votes)
Last modified on Wednesday, 18 May 2022 23:42
Published in Prescott.news
Tweet
Tags
« Prescott Happenings - The Week Before Thanksgiving 37 Water and Sewer Projects Approved by »