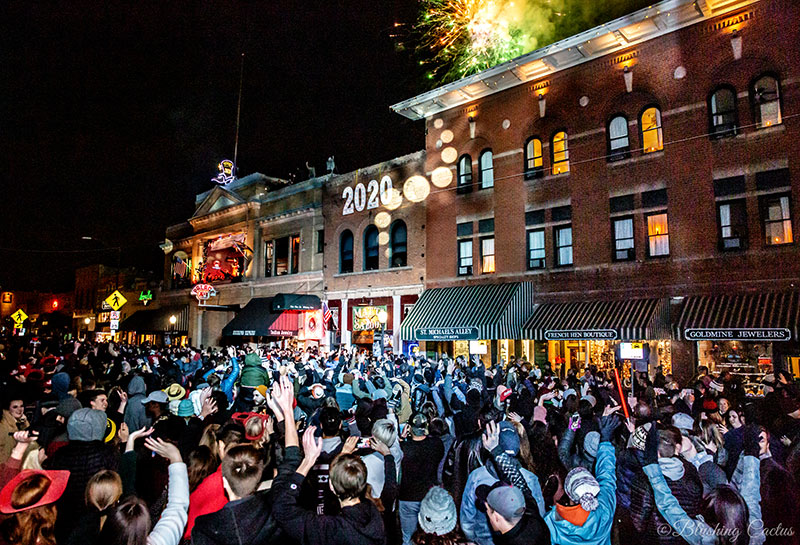 Prescott, AZ. – In 1942 through 1944 the famous Ball Drop in New York City was put on hiatus because of a light restriction during World War II. Instead, a moment of silence was held to mark the New Year. This year the traditional Whiskey Row New Year’s Eve Boot Drop will follow this lead and sit silently on top the Palace Building without any of the planned activities taking place. It is an understatement to say 2020 has been a difficult year for people all over the world. The planners of this year’s Boot Drop were ready to help say goodbye to 2020 at the 10th annual celebration on Thursday, December 31st, 2020 from 8:00 p.m. to 12:30 a.m. on Montezuma Street in downtown Prescott. It was no easy decision to cancel this year’s festivities knowing that people really need to celebrate the end of a dreadful year, but planners felt it was the right thing to do for the safety of the community. They also carefully reviewed The Governor’s Executive Order from December 3rd which added to pulling the final plug and not proceeding with the event.

"We‘ve tried to come-up with a balanced solution, consulted local officials and sponsor partners, but in the end there just is no way to follow mitigation procedures given the layout of downtown. The Governor’s Executive order states enforcement of social distancing to help mitigate the spread of COVID-19 and we’re not 100% sure how this could have been done," said Matt Brassard, co-owner of M & M Entertainment & Production who helps put on the event. “We normally get 10,000+ people to each drop and we know this year would be no different. Businesses in downtown will still be open for people to celebrate in their small groups and we hope that people will come out to support them.”

Planners will have the Boot on the Palace Building roof so people can still come down at their own pace and time and say goodbye to 2020 in their own private way. “Believe me, we didn't make this decision lightly. We just felt we couldn't add to the stress of our healthcare workers and law enforcement and hope everyone stays safe and healthy this year. We’re confident we’ll have one of the biggest New Year’s Eve parties next year,” Brassard stated. “We are also working on a way to do something virtually, so, please stay tuned and watch our social media pages for updates.”