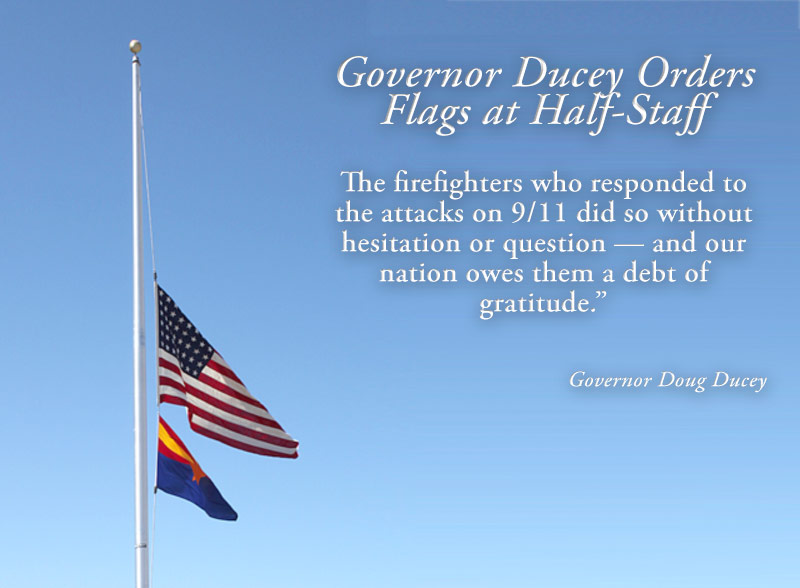 WE WILL ALWAYS REMEMBER

It's been called an inflection point in American history. The moment when everything changed. A tragedy that left an indelible mark on a generation.

Like the attack on Pearl Harbor in 1941 or the assassination of President Kennedy in 1963, the terrorist attacks of September 11, 2001 was a singular event in the lives of every American of a certain age.

Governor Ducey marked the 20th anniversary of 9/11 by announcing his intention to work with educators and lawmakers to make the teaching of the attack mandatory in Arizona schools. Governor Ducey plans to work collaboratively with the State Board of Education and key stakeholders to present a bill during the next legislative session that will guarantee Arizona K-12 students, who were not alive on the day of the attacks, will receive instruction on what occurred on September 11, 2001 and the impact it has had on the American way of life.

We're at a point where younger Arizonans have no direct recollection of the pain we felt 20 yrs ago when terrorists attacked our nation or the courage demonstrated in the days that followed. We're working w/ educators & lawmakers to make sure the next generation will #NeverForget —">https://t.co/twKa32M7LO

Governor Doug Ducey ordered flags at all state buildings be lowered to half-staff tomorrow, Saturday, September 11, in remembrance of the nearly 3,000 innocent men and women who lost their lives in the terrorist attacks of September 11, 2001.

“Today, we send special thoughts and prayers to the families of those who lost a loved one as a result of the 9/11 terror attack on our nation. And we remember and mourn the life of Gary Bird, the sole Arizonan who was killed on that horrible day.

“We also honor the many first responders—from Arizona and around the nation—who answered the call of duty when their nation needed them most. This tragic day would just be the beginning of a two-decade long war that wouldn’t end until just recently.

“We must recognize the women and men who have put on a uniform to protect and defend our country in the war on terror...

Arizona is grateful to the brave firefighters who immediately responded to the 9/11 terrorist attacks, and to those who put their lives on the line every day to protect Arizona communities. Hearing some of their stories today was a sobering reminder of the danger they often face. https://t.co/DcRw6EUmPr

“I’ve had a photograph of the Twin Towers on my wall since I first took office to remind myself every day of the sacrifices of our troops and the first responders and to remember all the people who lost their lives on 9/11.

“Please join me in remembering the fallen from this day. And join me in honoring our troops, who fight for a future in which such a terrible event never happens again.

The firefighters who responded to the attacks on 9/11 did so without hesitation or question — and our nation owes them a debt of gratitude. It was an honor to meet with a few of these heroic individuals and @AZFirefighters President @Bry_Jeffries to thank them for all they do. pic.twitter.com/E0CHOBEUsj