A Step Towards Election Integrity Featured 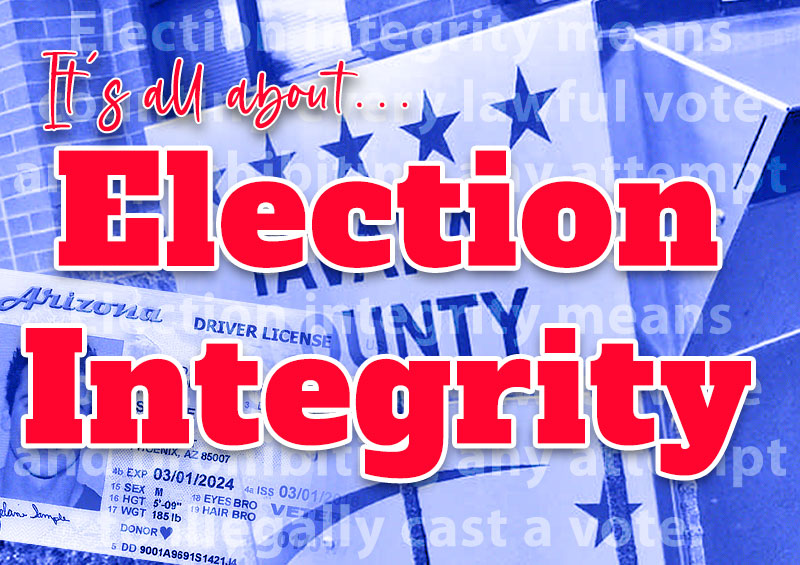 “Election integrity means counting every lawful vote and prohibiting any attempt to illegally cast a vote,” Governor Ducey said in a letter explaining his support for the legislation. This bill “is a balanced approach that honors Arizona’s history of making voting accessible without sacrificing security in our elections.”

House Bill (H.B.) 2492, sponsored by Rep. Jake Hoffman, requires Federal Only Voters, who are only eligible for casting a vote in federal elections, in Arizona to provide documentary proof of citizenship (DPOC). If they do not, they will not be eligible to vote in a presidential election or by mail. County recorders must also reject state voter registration applications that do not include proof of citizenship.

Additionally, the legislation adds relevant databases that counties must check so voter rolls are well maintained. It also ensures the Arizona Attorney General has the information needed to enforce violations of election integrity.

The number of Federal Only Voters registering to vote without providing DPOC has risen substantially. In 2020, more than 11,600 Federal Only Voters in Arizona participated in the general election without providing proof of citizenship. In Maricopa County alone, there are currently 13,042 active registered voters who have not provided evidence of citizenship to vote through use of the federal form.

H.B. 2492 codifies steps that counties must take in order to best ensure that voters in Arizona provide DPOC to vote in a presidential election and vote by mail.

The Governor’s signing of H.B. 2492 is in addition to a number of actions he took during the 2021 Legislative Session to protect Arizona voters, including signing:

The Governor last year also vetoed H.B. 2360, which would have directed the Secretary of State to maintain and operate the driver license voter registration system with a committee of county recorders by December 31, 2021.

From State Representative Jake Hoffman, sponsor of the legislation:

“Today is a historic day for Arizona and a great victory for Arizonans and all Americans alike. The signing into law of Arizona House Bill 2492, which requires verification of U.S. citizenship to be eligible to vote in Arizona elections, is a giant step toward ensuring elections are easy, convenient, and secure in our state.

“HB 2492 is an incredibly well-crafted piece of legislation that is on sound legal footing and broadly supported by voters of all political parties.  I am confident that should Democrats challenge HB 2492 in court it will only serve to further reinforce its clear constitutionality.”