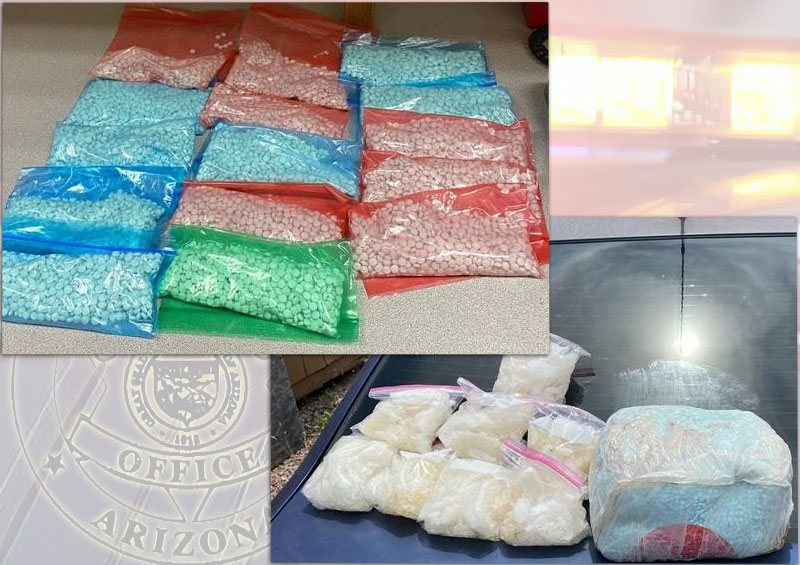 According to the Yavapai County Sheriff’s Office (YCSO), "During the first week of August, Yavapai County Sheriff’s Office K-9 unit, with the help of Partners Against Narcotics Trafficking (PANT) taskforce, conducted two traffic stops within an hour of each other in Camp Verde. The first stop resulted in the seizure of 8 pounds of meth and 10 pounds (40,000 pills) of fentanyl pills, following a consent search of the vehicle. The driver, identified as Marco Ceja-Partida (35) from Ontario, CA., was booked into the Camp Verde jail for transportation of dangerous and narcotic drugs for sale."

The YCSO Facebook post continued, "The second stop, merely 30 minutes later, lead to the confiscation of approximately 15,000 fentanyl pills. The driver, Hector Ramirez-Galvez (26) out of the Phoenix area, was arrested and booked for the transportation of narcotic drugs for sale."

Of course, these are not the only efforts to bring fentanyl into our state and country. Did you know that over half of the fentanyl brought into the country, comes through Arizona? Look at these two tweets from Governor Doug Ducey:

Arizona is at the frontlines of the fentanyl crisis. We have not – and will not – sit back. We launched the American Governors’ Border Strike Force to work with 25 other states to fight this lethal criminal activity directly tied to our border. —" data-mce-href="https://t.co/4wots49ADE —">https://t.co/4wots49ADE

Phoenix DEA: "We have seized drugs that were intended to supply every state in the United States.”