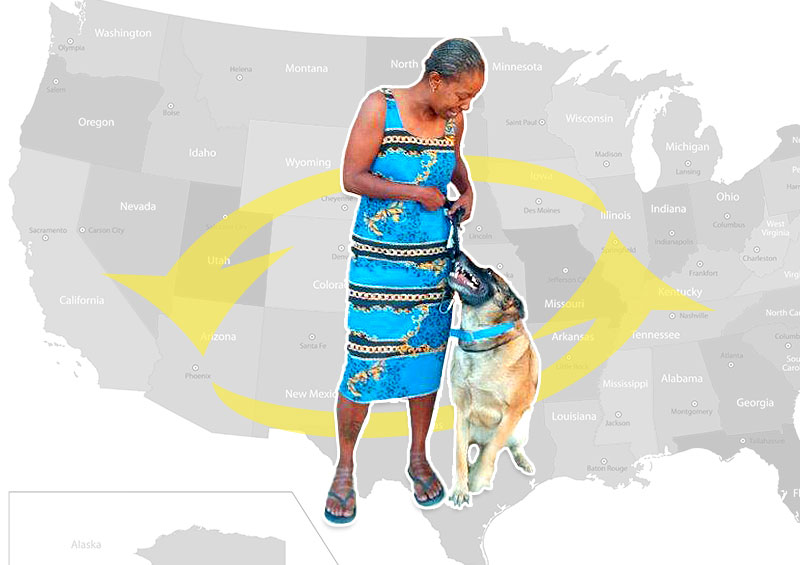 A lost dog from Illinois was re-united with its owner.

Prescott Valley Animal Control Supervisor Tim Yogerst had a welcome experience this past week in a job that has some significant ups and downs.

Yogerst was dispatched for a dog-at-large walking in the middle of the Robert Road and Spouse intersection. He responded and attempted to catch the animal, but was unsuccessful, as she was moving just fast enough to evade him.

Finally, a citizen offered her fenced yard, and Yogerst was able to corral the dog, which turned out to be very friendly. He brought her to the Prescott Valley Police Station, where he scanned her for a microchip. The chip came back to an address in Illinois, which Yogerst didn’t think strange as so many people are moving to the community and their dogs are still chipped with their old addresses.

Yogerst phoned the number on the chip and identified himself as Prescott Valley Animal Control, asking if she had a dog named Foxy. Cynthia Towncell immediately dissolved in tears and told him she had been in Prescott Valley in May. Her truck broke down and she had to return home without Foxy, leaving the dog in the care of a family member. The family member later told her Foxy was gone, he had gotten rid of her. She had looked for the dog for months but thought she never would see Foxy again.

Prescott Valley Animal Control held Foxy at the station, where she was spoiled by officers who walked her and loved on her. Meanwhile, Towncell got on the road and drove all the way to Prescott Valley to be reunited with Foxy.  When Foxy and Towncell were reunited on September 2, both were ecstatic to see each other.

Foxy’s successful return to Towncell is a good example of how microchips can be crucial in reuniting lost pets with their owners. The Yavapai Humane Society offers microchipping at their Wellness and Vaccination Clinic for $22. Find information at https://yavapaihumane.org/services-for-your-pet/wellness-clinic/ If your dog has a current microchip, and you have changed addresses, be sure to call the microchip service and update.