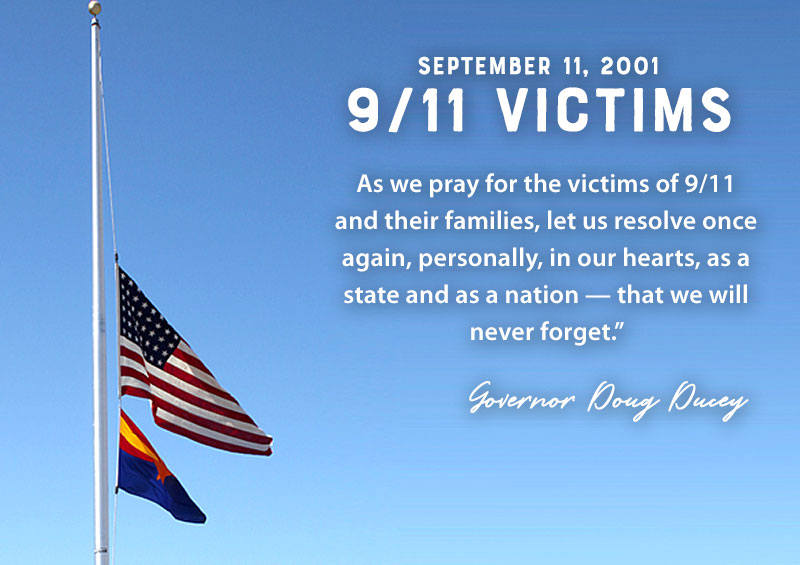 Governor Doug Ducey orders flags to half-staff in order to honor the 9/11 victims.

PHOENIX⁠ — Governor Doug Ducey ordered flags at all state buildings be lowered to half-staff today, Friday, September 11th, from sunrise to sunset in remembrance of the nearly 3,000 people killed in the terrorist attacks of September 11, 2001.

The Governor released the following statement:

“Nineteen years ago, nearly 3,000 people were killed in the worst terrorist attack on American soil.

“The events of September 11 left our nation shocked and devastated — but never broken.

“As American hearts gripped the full scope of the devastation, alarm turned to action; distress to determination. Determination to lift up our country and secure justice on behalf of the victims.

“On this solemn anniversary and every day, Arizona is grateful to all the men and women who put themselves in harm’s way to serve others: our law enforcement, firefighters, first responders, medical professionals and our Soldiers, Sailors, Airmen, Marines, and Coast Guardsmen.

“As we pray for the victims of 9/11 and their families, let us resolve once again, personally, in our hearts, as a state and as a nation — that we will never forget.”