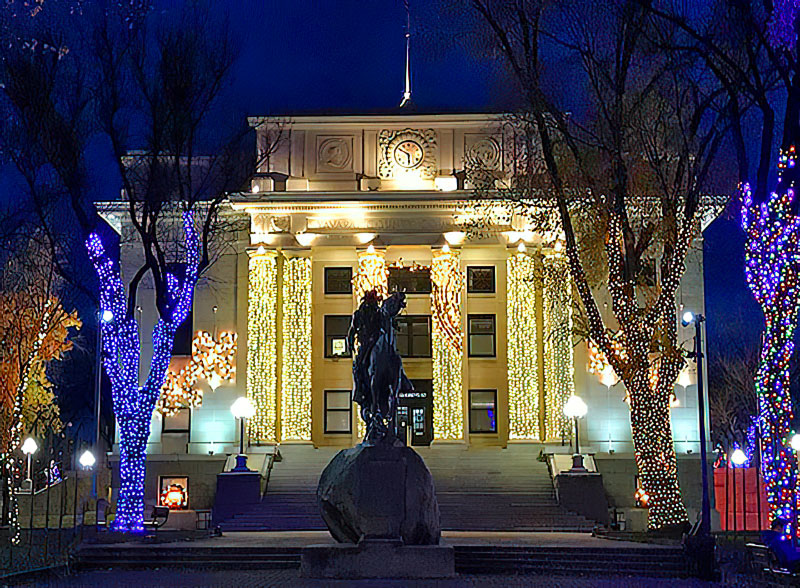 Prescott has been celebrating Christmas as a community since 1878

Prescott is Arizona’s Christmas City through and through!

Celebrating Christmas in the City of Prescott has long been a tradition in this community. According to the State Library of Arizona Museum, one of the earliest reports of Christmas Festivities took place in 1878. The Weekly Arizona Miner told of a visit from Santa Claus, who brought gifts for between 200-300 children. The Miner reported, "Some of the older ones also received valuable presents and immediately forgot their childhood days were things of the past.” Music was provided by the 12th Infantry Band.

The Miner also noted a soldier, “partaking of the good things generally yesterday, including egg-nog and perhaps something stronger in the line of ‘O be Joyful’”. Later, that soldier, perhaps a little too joyful, confused a private residence with Fort Whipple and demanded entry.

The Prescott Arizona History Blogspot reports that 1916 brought the first Christmas Tree to the Plaza. The cornerstone was laid for the brand new Courthouse (the same one that is there today.)

But, as Christmas approached, local citizens as well as the Chamber of Commerce thought it would be an excellent idea to put up a municipal Christmas tree right in the downtown plaza. On December 18, the idea received unanimous approval. They decided it needed lights, decorations, candy, toys and charity baskets for every worthy, but poor family in the city. “Prescott will be the first city in the entire State of Arizona to hold a big municipal tree,” reported the local newspaper.

But, they only had a week to accomplish their grand plans.

After receiving permission from the United States Forestry Office, a plan developed to cut one of Yavapai’s big pines and place it in the center of the plaza. Contributions for the Municipal Christmas Tree fund ranged from 15¢ to $25, and they managed to raise $125 in just a few short hours. In less than a week, a total of $400 was eventually collected.

Decorating was taken care of by the City and the Arizona Power Company.

Dolls for little girls, tops, marbles and coaster-wagons for boys were donated by the merchants of the City. Warm shoes and wraps for those in need were purchased and distributed.

They were ready by 10 PM on December 23rd. To make it even more magical, Prescott had a white Christmas that year. Between 75-100 people gathered for the festivities. "Hark the Herald Angels Sing," and "Silent Night” were sung. Boy Scouts carried baskets to the homes of the “poor and worthy” in Prescott. “No one was too old or too young to be forgotten,” the paper reported. It took the Boy Scouts until midnight to finish their deliveries.

Today, Prescott continues much of the same traditions. The trees on the Plaza are lit and songs are sung, thanks to local donations and efforts of the Chamber of Commerce, the City of Prescott and even sponsors such as APS. Our community is very generous, donating toys and funds to the many non-profits throughout the greater Prescott area to ensure everyone can celebrate Christmas.

Even though 2020 has presented innumerable challenges, Prescott has proven that it proudly remains Arizona’s Christmas City.