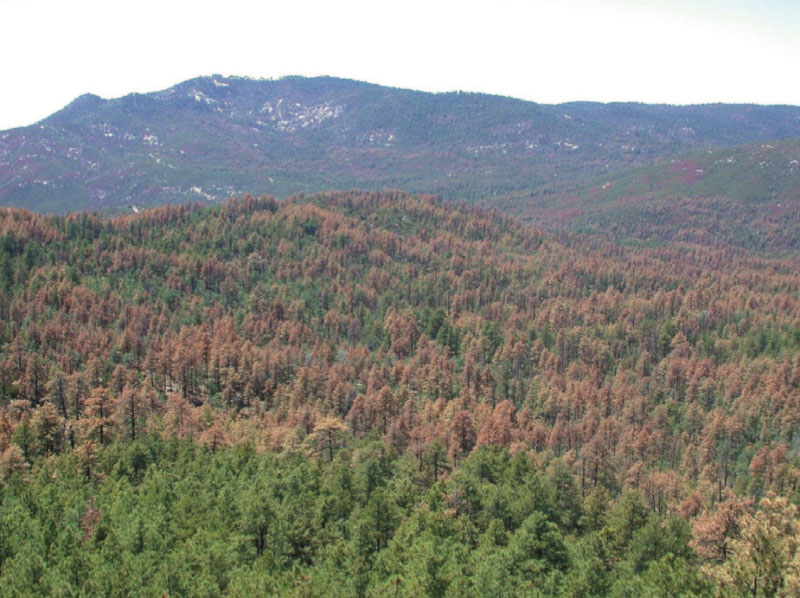 Prescott, AZ, March 4, 2021 - Pine engraver beetles are actively infesting ponderosa pine trees across areas of the Prescott National Forest. Aerial detection surveys conducted by the US Forest Service in early February 2021 recorded a ten-fold increase in ponderosa pine mortality caused by these bark beetles since August 2020 with more than 2,000 acres impacted. The 2021 survey focused on Mingus Mountain, the Bradshaw Mountains, and the Crown King area. Most tree mortality was observed in the Bradshaw Mountains, but elevated mortality was also mapped on Mingus Mountain. Ponderosa pine mortality is expected to increase in 2021, especially if continued warm and dry conditions occur and in areas of high tree density or weakened trees.

Populations of these bark beetles have increased in response to dry and warm conditions during the last year. Because these beetles have a high reproductive potential with two or more generations per year, they can take advantage of suitable climate conditions and weakened trees.  During periods of extended drought, pine trees become water-stressed and their defenses reduced giving beetles an upper hand. Often there is a lag between the start of drought and when beetle activity increases to the level that it becomes noticeable. However, usually once the drought ends and trees recover, beetle populations typically collapse, and tree mortality diminishes.

Infested trees are typically first noticed by a change in color of pine needles (fading) from green to straw to reddish-brown throughout the summer and early fall. When large trees are attacked by these beetles, they often exhibit a characteristic top-down fade pattern. Close inspection of tree trunks will reveal rust-colored boring dust in bark crevices and possibly popcorn-sized wads of pine resin before the needles begin to fade. By the time all the pine needles have faded to brown, the beetles that killed a tree will have vacated and pinhead-sized exit holes can be seen on the bark surface.

If infested trees are detected early after attack, trees can be felled and disposed. Note, beetles will still emerge from felled trees, so once the tree is cut it needs to be either removed from the site to a location with no hosts for the beetle or destroyed. During warm weather these beetles can complete their lifecycle in 1-2 months, so tree removal/destruction needs to be completed quickly.

Promoting vigorously growing ponderosa pine in stands with a diversity of tree species and sizes is the best long-term approach to lessening the effects of bark beetles in ponderosa pine.  Typically, this is achieved through thinning, which decreases competition for water among the remaining trees. Thinning during non-drought years allows the trees ample time to adjust to and take advantage of the added space.

To provide short-term protection against bark beetle attack, individual, high-value trees can be treated with an application of insecticide sprays (registered for use on pines). Private landowners wishing to treat individual trees should contact the Arizona Department of Forestry and Fire Management at (602) 771-1400 or Yavapai County Extension office at (928) 445-6590 for additional information. Although pheromone repellents (e.g., verbenone or MCH) may work to prevent other bark beetle species from attacking trees, no pheromone treatments  have been demonstrated to protect ponderosa pine trees from the engraver beetle species currently infesting the ponderosa in the Prescott area. Keeping ponderosa pine trees well-watered during dry periods can promote vigorous growth in landscape trees and increase defense against beetle attack. Landowners are reminded to not stack beetle-infested firewood or green logs against or near desired ponderosa pine as beetles developing in this material are likely to attack adjacent trees when they emerge.

The high risk of bark beetle on the Prescott National Forest has been a major concern since the major outbreak the forest experienced from 2001-2003. Following this outbreak, which resulted in the loss of more than 90,000 acres of ponderosa pine forest, the PNF has taken proactive steps to make the forest more resilient to bark beetle attacks. In the last 15 years the Prescott National Forest has completed thousands of acres of mechanical thinning treatments in the Prescott Basin in the areas surrounding Prescott and its neighboring communities. These thinning projects have been aimed at reducing the densities of ponderosa pine forests in order to reduce inter-tree competition for water while reducing the risk of stand replacing wildfire. The Prescott National Forest is committed to continue this proactive approach at thinning to improve forest health and allow our ponderosa pine forests to be resilient to insect damage in drought years. 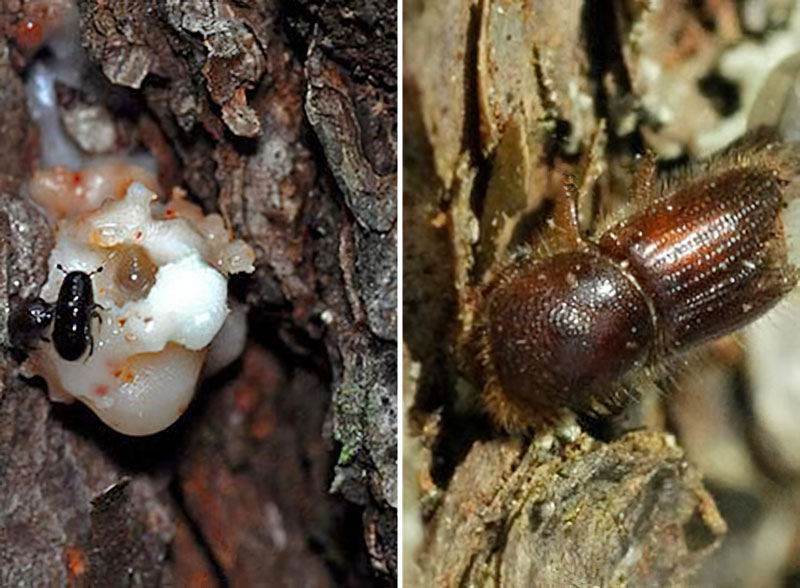 More information can be found at:

USDA Is an Equal Opportunity Provider, Employer and Lender