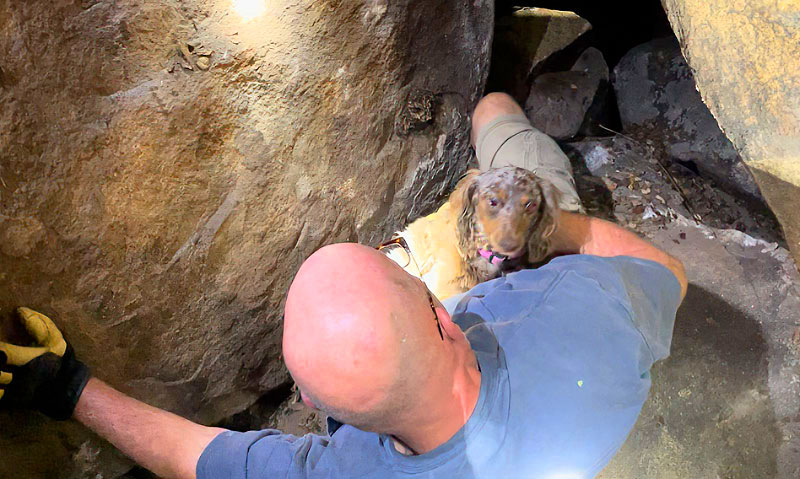 Camie made it through unscathed!

About 6:30 PM Prescott Regional Communication Center received a 911 call about a dog that was stuck underneath a rock in the 1100 block of Linwood Avenue in Prescott. When Prescott Fire Battalion Chief Kevin Keith arrived to the residence, he found that the dog had burrowed herself deep underneath a complex of large granite boulders. The 11 year-old Miniature Dachshund, named Camie (short for Camouflage), had disappeared a little after 3 PM this afternoon and Dan Leggett, the owner, was able to trace the dog down to this complex of boulders. The Prescott Fire Department’s technical rescue station had the airbags and extrication equipment that was needed to move large boulders while the Prescott hazardous material station had confined space cameras that allowed the visualization of exactly where the dog was underneath the rocks. It was then determined that the main rock that needed to be moved was a 60 ft.³ granite boulder that weighed an estimated 10,000 pounds.  That rock was safely relocated through a series moves using airbags and extrication equipment that is usually used for vehicle extrication. Once that large main boulder was safely relocated, Camie was able to be pulled out from underneath a second boulder.

The entire process took about 2 1/2 hours of work utilizing 2 Prescott Fire Department engine companies and a battalion chief. Camie was safely extricated from underneath the rocks and reunited with her owner.  About 30 minutes after the incident finished, the owner Dan said that Camie was wiped out from the incident and spent the rest of the night in her bed napping. While not a cat with nine lives, Camie did make it through tonight unscathed and has a bright future ahead of herself with a family that loves her very much!