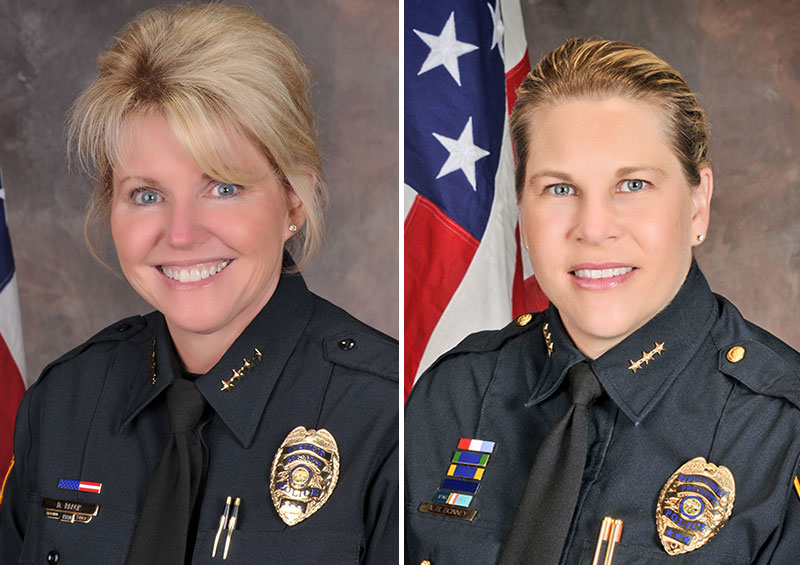 City announces change of guard at the Prescott Police Department

PRESCOTT, AZ (January 15, 2021) – Prescott Police Chief Debora Black has announced her intention to retire from law enforcement, effective February 12, 2021. She intends to remain available to the City in an advisory and support role during the transition in departmental leadership. Deputy Chief Amy Bonney will be named Interim Police Chief as City leadership considers the next steps to replace Chief Black.

“For me, serving the City of Prescott for nearly five years has been an absolute honor, and the pinnacle of my law enforcement career,” said Chief Black. “The challenges we have faced, and the successes we have enjoyed are attributable to the strength of the relationships, collaboration and unwavering dedication to our mission and the people we serve. We have been so fortunate to have the full support of City Management, the Mayor and Council, and of course, our citizens.

“While I am looking forward to retirement from public service, I am also very excited to begin a new career as a Licensed Counselor early next year. Throughout my career, I have witnessed firsthand the critical need for mental health services. I am excited I will soon join the ranks of professional mental health providers and further my passion to help people in the community.”

Prescott Mayor Greg Mengarelli offered these thoughts: “I want to express my deepest gratitude to Chief Black for her unwavering dedication,” said Prescott Mayor Greg Mengarelli. “I have greatly appreciated her steady leadership, her vast experience, and her dedicated professionalism. I wish her all the best in her new ventures as she continues to serve our community.”

“It has been a pleasure working with Chief Black,” said City Manager Michael Lamar. “Her experience and leadership were greatly appreciated, especially during this past year. We wish her well as she takes on a new endeavor. I am pleased to appoint Amy Bonney to the position of Interim Police Chief. The department will be in good hands, as we move forward with plans to replace Chief Black.”

“It has been an honor to serve with Chief Black,” said Deputy Chief Bonney. “She has helped me grow and develop into the law enforcement leader I am today. The men and women of the Prescott Police Department thank Chief Black for her professional leadership. We wish her well as she continues to serve the community with integrity, compassion and grace.

I am excited to be named Interim Police Chief, and for the privilege to lead the Prescott Police Department as we face a variety of changes, challenges and opportunities. Together we will focus on the future and continue to serve this wonderful community.” 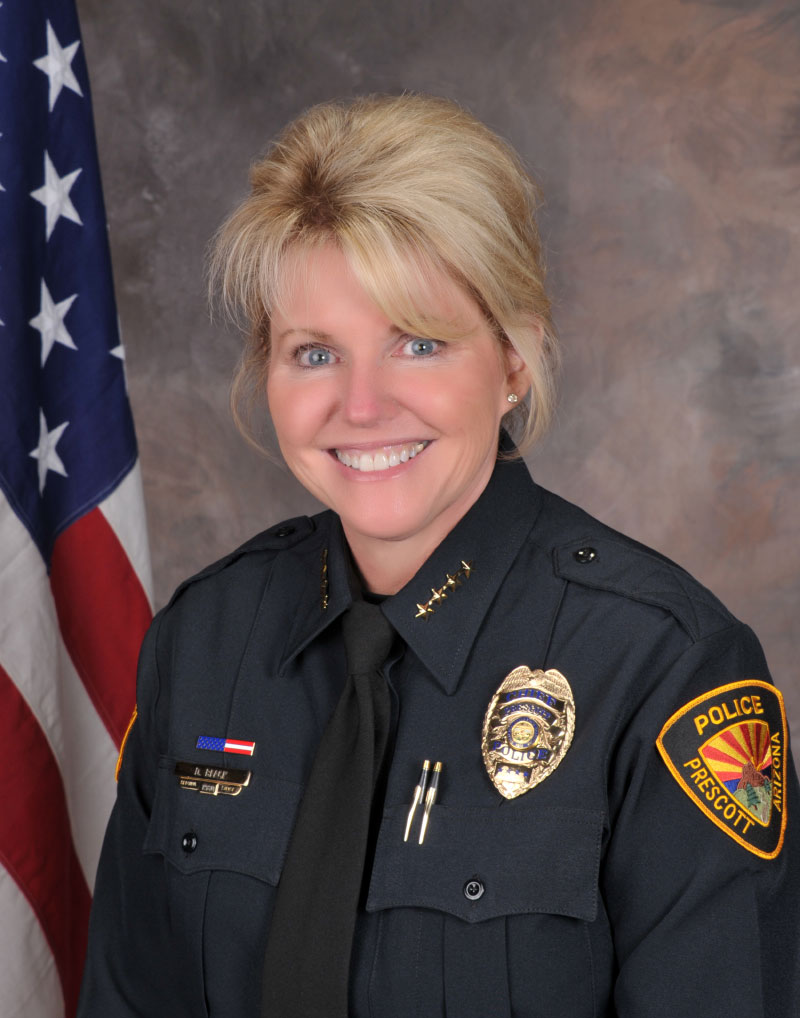 During her career, Chief Black was awarded the Medal of Valor, three Medals of Lifesaving and two Police Chief’s Unit Awards. She was Executive Fellow for the Police Foundation dedicated to advancing policing through innovation and science.

She has served on the Executive Board and is currently president of the Arizona Association of Chiefs of Police, was a member of the Yavapai County Justice and Mental Health Coalition, Advisory Board Member for the Coalition of Compassion and Justice and serves on the NIDA Practitioner Board for the Justice Community Opioid Innovation Network. She was appointed as an inaugural member of the Council on Criminal Justice, a national, non-partisan think tank formed to advance criminal justice policies and practices. Chief Black is involved in many local non-profits in service to the community including Prescott Women Who Care, and Yavapai Big Brothers and Big Sisters. YWCA honored her as the Public Service Leader of the Year in 2008.

In September 2020, Chief Black was recognized as a 2020 Arizona Capitol Times Public Safety Leader of the Year. 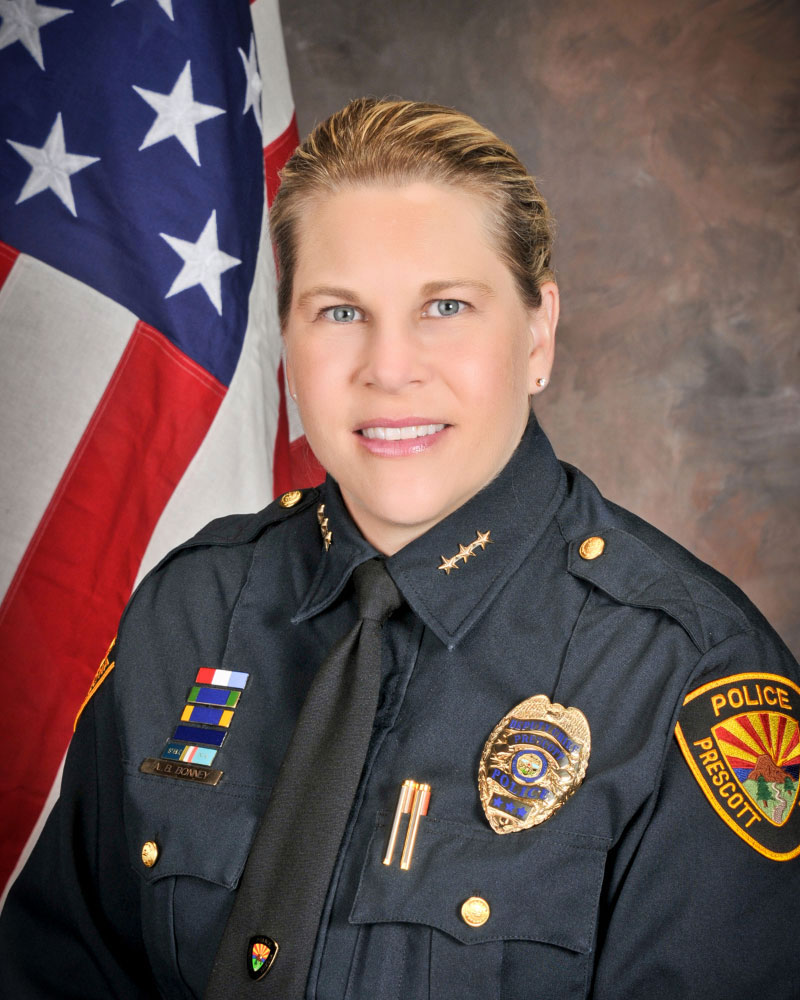 Amy Bonney has served as Deputy Chief of Police at the Prescott Police Department, a post she has held since 2016. Amy holds a Bachelor’s of Science from Northern Arizona University in Criminal Justice and a Master of Public Administration degree from the University of Phoenix. Amy is a graduate of the FBI National Academy, 257th Session, and serves as the First Vice President for the State of Arizona chapter of the FBI National Academy Associates. She is also President of the Prescott Kiwanis Club.

She has served with the Prescott Police Department for over 22 years and has enjoyed many assignments including Field Training Officer, Recruit Training Officer, Bicycle Patrol and certified crisis negotiator with the Special Weapons and Tactics Team. Deputy Chief Bonney has received many awards including Sworn Officer of the Year, Supervisor of the Year, Community Service Commendations and the Medal of Valor. She is driven to help organizations and individuals create strong and manageable performance management goals to help create capacity for robust employee development, engagement, growth, and personal and professional job satisfaction. She is proud to be a lifelong Prescott resident, born and raised.