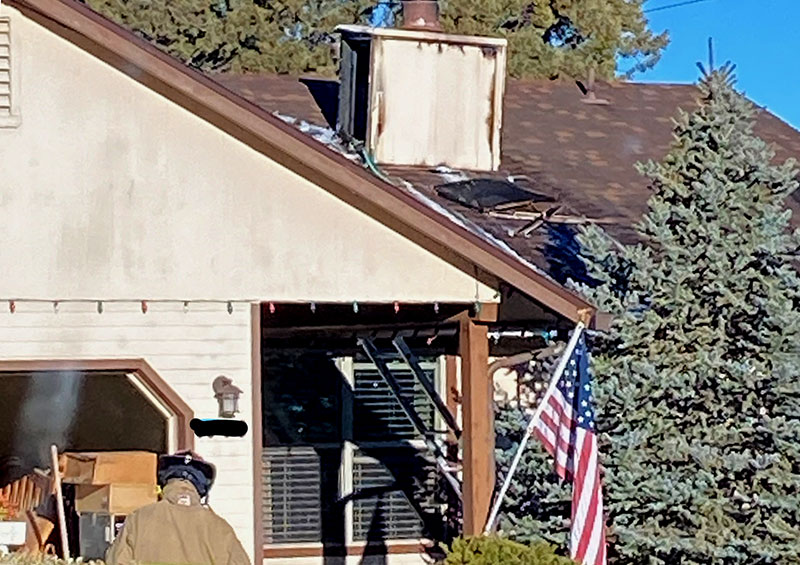 At about 6:45AM on Thursday, February 4th, Prescott Regional Communications Center received a call from the residence stating they had a fire in their house. Initial reports were that the wall was hot and they could smell smoke. A second call to the Dispatch Center from a neighbor confirmed there was smoking coming from the roof of the structure. Prescott Fire Department responded to the incident with 3 Engine Companies, 1 Truck Company, and a Battalion Chief. One Ambulance was dispatched from Life Line Ambulance.

The first arriving Engine Company arrived on scene and found heavy smoke coming from the roof around a chimney chase and out of the gable end vent. Crews made a quick interior attack pulling ceiling and applying water as they moved to the fire location. Once the attic fire was mostly extinguished, crews worked on pulling the wall around a fireplace where the fire originated.  The fire Investigator was able to determine that the fire was caused by a fireplace malfunction which allowed fire to enter the concealed space behind the fireplace allowing the fire to move to the attic undetected. It took Firefighters about an hour to extinguish the fire and firefighters remained on scene till 1030 ensuring all hotspots were extinguished.

The occupants of the house were able to exit safely after they were alerted by working smoke detectors in the house. Fire crews were able to rescue all of the family pets from the fire, and the City of Prescott Animal Control assisted with the care of the animals since the residents have been displaced from their home. The Arizona Crisis Team is working with the Red Cross to assist with the needs of the homeowners.

Prescott Fire Department would like to remind you to have your chimneys swept at least once a year by a professional and at that time have your fireplaces inspected for safe and proper operating conditions. Depending on the amount of use and the type of wood burned in the fireplace, you may need to clean your chimneys more often. We would also like to remind you that the batteries in your smoke detectors need to be replaced and the detectors tested annually. This incident is a great reminder that smoke detectors save lives.